U.S. trained and supplied specialist bomb detecting sniffer dogs will no longer be sent to Jordan and Egypt after several of the animals died due to what U.S. officials say was lack of care and maltreatment.

“Any death of a canine in the field is an extremely sad event and we will take every measure possible to prevent this from happening in the future,” a U.S. State Department official told reporters on Monday.

The dogs “play a critical role in our CT (counter-terrorism) efforts overseas and in saving American lives,” the spokesperson said, noting the program had now been running for 20 years with less than favorable results for the loyal canine companions.

In September, a U.S. report highlighted cases of negligence in dogs sent to Jordan, Egypt and eight other countries in recent years.

It followed another in 2016 filed after the State Department sent staff members, trainers and veterinarians on oversight visits and welfare checks to Jordan.

One such visit in April that year found canine parvovirus, described as “rampant” at a police facility, was the main cause of death for dogs there, the report said.

Some dogs had hip dysplasia and arthritis and had “lost the will to work,” it said. Dogs belonging to Jordan also showed overall signs of poor treatment and neglect. 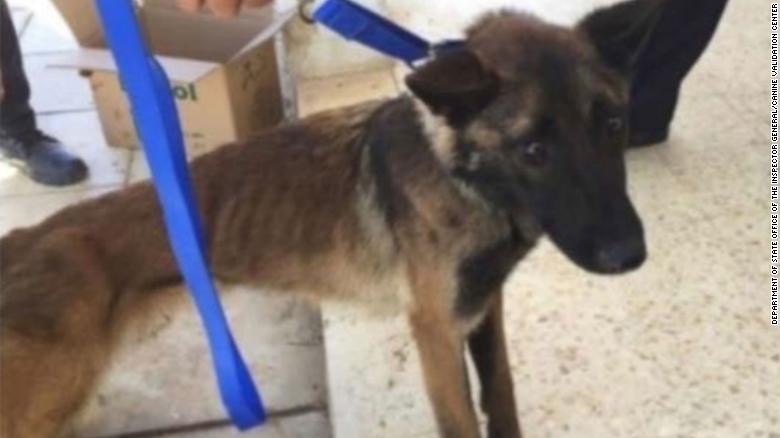 Sniffer dog Athena, who was photographed severely emaciated in 2018, less than one year after being sent from the U.S. to Jordan (Office of Inspector General/Department of State).

The U.S.-trained dogs were provided as part of anti-terrorism programs. The inspectors discovered numerous cases of negligence in the care of some 135 dogs, including Belgian Malinois, German Shepherds, Labradors, and other canines trained in detecting explosives.

The main concerns were with Jordan, the first beneficiary of the program, where one dog died due to inadequate care and another had to be euthanized upon its return to the United States. Others had returned emaciated and with lung cancers.

In a new report out this month the OIG discovered that in June and September two other dogs had died in Jordan of “unnatural causes” — one due to heat stroke and the other poisoned by pesticides sprayed by Jordanian police in or near the dog’s kennel. 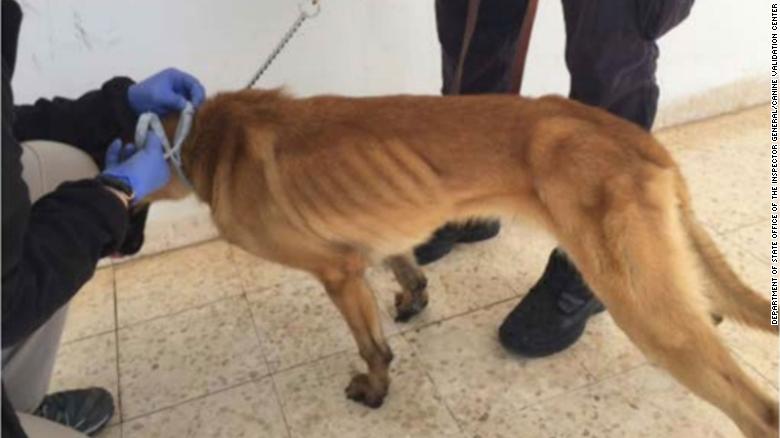 An underweight bomb-sniffing dog in Jordan, which had been sent from the U.S. under the Explosive Detection Canine Program (Office of Inspector General/Department of State).

The deaths could have been avoided with better care, the report said.

The December report also urged U.S. officials to seek ways to better monitor the sniffer dogs. In Egypt, for example, U.S. officials have been denied access to the kennels or the airport where the animals are deployed.

In September, Chuck Grassley, chairman of the Senate Committee on Finance, sent a letter to Secretary of State Mike Pompeo requesting more information and a briefing on the issue.

“It is important for Congress to know whether the (program) is operating effectively and efficiently and whether animals involved in the program are being treated according to the humane and ethical standards that the American people undoubtedly expect,” Grassley wrote.