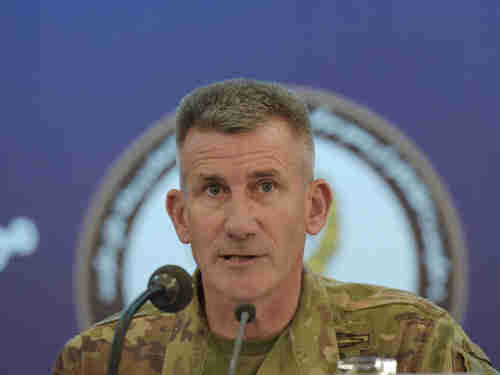 U.S. Army General and commander of US forces in Afghanistan John Nicholson (AFP)

During the 1980s, the Soviet Union became embroiled in its own version of the Vietnam War – an asymmetric fight against guerrilla forces in Afghanistan that the Soviets could not win. Since the Soviets were American enemies in those days, U.S. forces aided the side opposing the Soviets. The people we supported were the ethnic Pashtuns who later became the Taliban, and their allies, a group of Saudi Wahhabi jihadists, including Osama bin Laden, who later became al-Qaeda.

Now General John Nicholson, head of the U.S. forces in Afghanistan, says that the reports are true. According to Nicholson:

We’ve had stories written by the Taliban that have appeared in the media about financial support provided by the enemy. We’ve had weapons brought to this headquarters and given to us by Afghan leaders and said, ‘This was given by the Russians to the Taliban.’

We see a narrative that’s being used that grossly exaggerates the number of Islamic State group fighters here. This narrative then is used as a justification for the Russians to legitimize the actions of Taliban and provide some degree of support to the Taliban.

Nicholson says that by supplying weapons and money to the Taliban, the Russians are interfering with the attempts to bring peace to Afghanistan through negotiations and peace talks with the Taliban.

This whole story raises far more questions than it answers. Apparently, the weapons at issue are 1980s vintage, so it is possible that they made their way into Taliban hands by another path.

The background story has several delusional elements. The Russians today are blaming the whole 1980s Afghanistan fiasco on the United States. According to the Russians, they were tricked into entering the 1980s Afghanistan war by president Jimmy Carter’s national security advisor, Zbigniew Brzezinski. Brzezinski, who died last year, apparently believed the same thing.

This is completely delusional on the part of both the Russians and Brzezinski. There is no way that the Soviets committed hundreds of thousands of troops to a ten-year war in Afghanistan on the basis of a trick. However, the delusion has been convenient for both parties. The Russians absolve themselves of the blame for the war by blaming it on the Americans, and Brzezinski can continue to pat himself on the back.

Another part of the delusion is that the Russians and the Taliban could be allied in any meaningful way. Russia is allied with Iran, which is allied with the Shia groups that the Taliban keeps trying to kill. Furthermore, by supplying weapons to jihadists in Afghanistan, those jihadists could travel to Russia and use the weapons there.

The biggest delusion – on the part of the American administration – is that a peace agreement can be reached.

I have described in detail the reasons why a peace agreement is impossible many times (see “23-Aug-17 World View — Trump promises victory in Afghanistan by redefining ‘victory'”), but the one-sentence summary of the reasoning is this: Young Pashtuns are coming of age, and looking for vengeance against the Tajiks, Hazaras and Uzbeks that they fought in the bloody civil war of 1991-96.

However, as I have written in the past, the Nato alliance and the U.S. administration appear to have a larger purpose in mind. As war with China and Pakistan approaches, president Trump wants to keep American troops active in Afghanistan and to continue to maintain several American military bases in Afghanistan, including two air bases in Bagram and Kandahar International Airport. These bases will be valuable in any future war with China. Under these circumstances, having troops in Afghanistan is what matters, whether the Taliban are defeated or not. CBS News and BBC and Russia Today (29-May-2017)

The U.S. Navy on Friday conducted a new “freedom of navigation” operation in the South China Sea.

The warship USS Mustin traveled within 12 nautical miles of China’s illegal artificial island and military base near Mischief Reef in the Spratly Islands and carried out maneuvering operations.

According to Nicole Schwegman, a spokesman for the US Pacific Fleet:

We conduct routine and regular freedom of navigation operations, as we have done in the past and will continue to do in the future.

As usual, the Chinese were furious and began emitting nonsense. According to China’s Foreign Ministry spokesman Hua Chunying:

On March 23, USS Mustin entered the neighboring waters of relevant islands and reefs of China’s Nansha Qundao without the permission of the Chinese government. The Chinese navy has identified and verified the US warship and warned it to leave in accordance with the law. The relevant act of the US side has violated the Chinese law and relevant international law, infringed upon China’s sovereignty, undermined peace, security and order of the relevant waters and put in jeopardy the facilities and personnel on the Chinese islands, and thus constitutes a serious political and military provocation.

China has indisputable sovereignty over Nansha Qundao and its adjacent waters.

The problem we have with both China and Russia these days is that they lie so often that we have to assume that everything they say is completely worthless.

This statement claims “indisputable sovereignty.” Is Hua Chunying a complete idiot, or does she think that the rest of us are so stupid that we’ll believe any nonsense that comes out of her mouth? The claim of “indisputable sovereignty” is a lie on its face because much of the world disputes it. The South China Sea is international waters, as declared by the United Nations Permanent Court of Arbitration in the Hague, which eviscerated all of China’s claims in the South China Sea, in July, 2013. It’s China, not the United States, that’s violating international law on a continuing basis. Reuters and China’s Foreign Ministry