The bishop of Tulsa stated Sunday that allegations by the former papal nuncio to the United States that Pope Francis knew of Cardinal McCarrick’s sexual predation and yet reinstated him to a position of influence are a “good place” to start investigations into clerical sex abuse and cover-up.

On Saturday, Archbishop Carlo Maria Viganò released an 11-page affidavit claiming Pope Benedict had imposed “canonical sanctions” on Cardinal McCarrick, forbidding him from traveling, celebrating Mass in public, or participating in public meetings, but that Pope Francis later lifted these sanctions and made McCarrick his close personal adviser.

Asked about these allegations on the papal plane returning from a weekend trip to Ireland for the World Meeting of Families, Pope Francis refused to deny the archbishop’s claims, saying he would not utter “a single word” about the accusations and suggesting, rather, that journalists read the statement and draw their own conclusions from the report.

In a Facebook post Sunday evening, Bishop David Konderla of Tulsa said an investigation into sexual abuse and cover-up was necessary to “restore holiness and accountability to the leadership of the Church” and that Archbishop Viganò’s statement is “a good place to begin the investigations.”

“St. Michael the Archangel, defend us in battle,” he added: 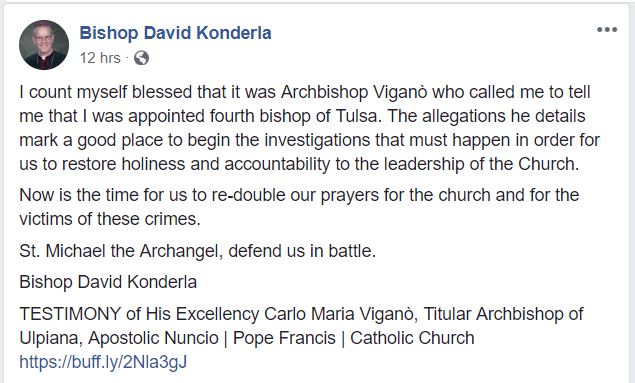