President Trump’s tailgate party is in full swing outside of Orlando’s Amway Center, with “thousands” of supporters listening to live music and stopping by food trucks as they await the president’s arrival at what has been dubbed the “45 Fest.”

Supporters began lining up early Monday morning, but the crowds are increasing, and the campaign’s “45 Fest” is in full swing. The all-day tailgate party will feature music, food trucks and a giant screen to display Trump’s speech for what is expected to be a massive overflow crowd.

“The president’s historic announcement of his second term presidential run has already generated tens of thousands of ticketing requests and will draw an enormous crowd,” Michael Glassner, the chief operating officer of Trump’s campaign, said in a statement. 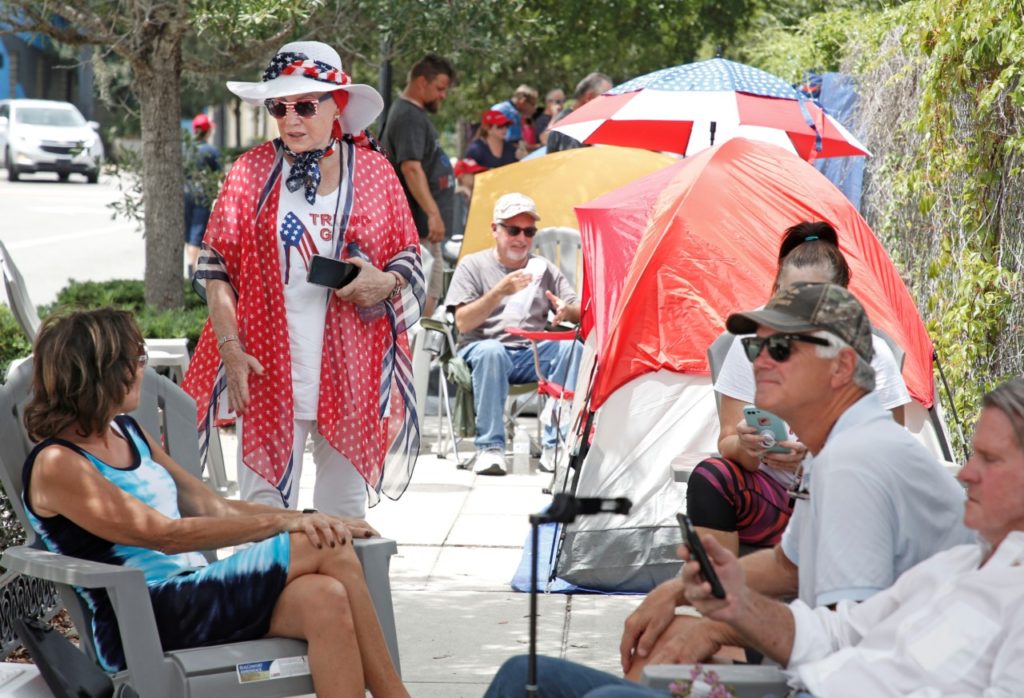 Supporters of U.S. President Donald Trump line up along one of the main streets outside the Amway Center some 40 hours before a Trump campaign event in Orlando, Florida. – President Trump is expected to launch his 2020 re-election campaign here on Tuesday night. (GREGG NEWTON/AFP/Getty Images)

“That’s why we’ve organized our first 45 Fest outside the Amway Center. We’ll have delicious food, live music, big screens, and a great time for all of our guests,” he continued.

“Inside and out, the excitement at this Trump rally will be something to remember as President Trump makes history,” he added.

People are already heading to the event, which officially kicked off at 10 a.m. ET.

According to local media reports, a live band (“The Guzzlers”) is playing, and food trucks are lined up and serving food. Some say “thousands” are flocking into the area, which can reportedly hold 8,000.

Thousands continue to pour inside the fenced in waiting area beside the Amway Center. This is also the location of 45 Fest where those who could not get inside with a ticket can watch President Trump’s speech live on a projection screen #FOX35 pic.twitter.com/uMXC3f6mYn

Right now about two thousand people are standing in the corrals. ( I didn’t count each one). There is room for 8,000 in here.

Some of the thousands already braving the Florida heat to get in to see President Trump in the Amway Center. #TrumpRally #Trump #Elections pic.twitter.com/ZLxFYrvyGR

It’s 8 AM outside outside the Amway Center where @realDonaldTrump will hold the grand re-launch of his 2020 re-election campaign. The band is warming up and there’s a party atmosphere among those in the (very long) line to get in. pic.twitter.com/FA8rkNDtJT

Hundreds are gathered for #45Fest across the street from @AmwayCenter. The crowd is growing. There is a stage for live music, food trucks & a big screen to watch the President’s speech tonight. #TrumpRallyOrlando #TrumpRally @ActionNewsJax @WOKVNews pic.twitter.com/gLjBtofsoZ

Large crowd gathered here in Orlando at what the campaign is calling “45 Fest” before President Trump’s kick-off rally later tonight.

The party is started at #45Fest nearly 12 hours before @realDonaldTrump takes the stage in Orlando! pic.twitter.com/H1lBVgaBXW

It’s 8:20 AM in Orlando and #45Fest is already filling up outside the #AmwayCenter – 12 hours before @realDonaldTrump even takes the stage.

Gonna be a raucous party! pic.twitter.com/VtAn9JuBU0

“The Fake News doesn’t report it, but Republican enthusiasm is at an all time high,” he tweeted.

“Look what is going on in Orlando, Florida, right now! People have never seen anything like it (unless you play a guitar). Going to be wild – See you later!” he added.

The Fake News doesn’t report it, but Republican enthusiasm is at an all time high. Look what is going on in Orlando, Florida, right now! People have never seen anything like it (unless you play a guitar). Going to be wild – See you later!