As I have said over and over and over, the left has one trick that it will use again and again when its back is in the corner: shout ‘racist’ in a crowded country.

On Saturday, during the peaceful and patriotic tea party protest at the Capitol, the Democrats staged a series of symbolic acts meant to manipulate the media to do its bidding. The Congressional Black Caucus pulled the Selma card and chose to walk through the crowd in the hopes of creating a YouTube incident. This is what it looked like:

There is no reason in 21st century America on an issue that is not a black or white or a civil rights issue to have a bloc of black people walk slowly through a mostly white crowd to make a racial point. The walk in and of itself — with two of the participants holding their handheld cameras above their heads hoping to document “proof” — was an act of racism meant to create a contrast between the tea party crowd and themselves.

This is the same failed symbolism that Janeane Garofalo and MSNBC have been trying to implant for the last year. The only supposed evidence of white-on-black racism at a tea party that MSNBC was able to find was a man carrying a gun at an Arizona Obama rally. But, wait, MSNBC cut off the man’s head with a photo editing software. That Second Amendment fan was actually black. Never mind. 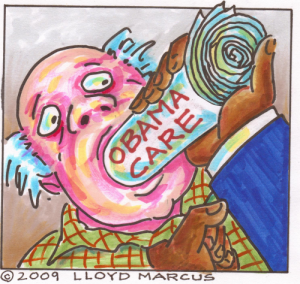 Saturday’s “never mind” moment will live in infamy as the Congressional Black Caucus claimed the N-word was hurled 15 times. YouTube video shows that at least two of the men in the procession were carrying video cameras and holding them above the crowd. They have not come forth with evidence to show that even one person hurled the vile racist epithet. The video also shows no head movement one way or another. Wouldn’t the N-word provoke a head turn or two? Is it really possible that in 2010, in a crowd of 30 or 40 thousand people — at the center of a once-in-a-lifetime media circus — not one person’s flipphone, Blackberry, video recorder or a network feed caught a single incident? And if not, then at least someone could have found an honest tea partier to act as an eyewitness — or the Congressional Black Caucus would have confronted the culprit(s). If that had happened, there would be an investigation to see if the perpetrator was a left-wing plant.

Let’s remember that Nancy Pelosi followed this procession with a “perp walk” of her own, as she carried the giant gavel that hammered down the passage of Medicare in 1965 to its rendezvous with destiny. Does any rational person seriously believe that the Capitol Police or her security people would have let the Speaker of the House — second in line of succession to the presidency, right after the Vice President — walk into danger as alleged by the Congressional Black Caucus? Please.

That’s how much the Democrats need a racist Tea Party moment. To stop it in its tracks. That’s why on Saturday they used the Congressional Black Caucus to try to manufacture the false appearance of one. And when they didn’t get it, they did what they always do: they lied.

Alinsky taught them well: the ends justify the means. And that’s how the Democrats play. They love using black people as symbols of oppression. They love to use them for staged rallies, staged walks and staged protests. It’s why they fought so hard to keep the heavily minority ACORN alive. They were the portable army that would cry racism in front of your place of business until the company paid them off to go away.

Haven’t we had enough? Are we going to allow the left to use its despicable acts of lies and intimidation to shut up legitimate dissent on a subject that has nothing to do with race? Are we going to allow the professional race hustlers like Jesse Jackson and Al Sharpton to continue their shakedown rackets — so memorably exposed by Shelby Steele in his book White Guilt: How Blacks and Whites Together Destroyed the Promised of the Civil Rights Era?

If we let them get away with Saturday’s stunt — using the imagery of the Civil Rights era and hurtful lies to cast aspersions upon the tea party whole — then they really will have won the day.

It’s time for the allegedly pristine character of Rep. John Lewis to put up or shut up. Therefore, I am offering $10,000 of my own money to provide hard evidence that the N- word was hurled at him not 15 times, as his colleague reported, but just once. Surely one of those two cameras wielded by members of his entourage will prove his point.

And surely if those cameras did not capture such abhorrence, then someone from the mainstream media — those who printed and broadcast his assertions without any reasonable questioning or investigation — must themselves surely have it on camera. Of course we already know they don’t. If they did, you’d have seen it by now.

Rep. Lewis, if you can’t do that, I’ll give him a backup plan: a lie detector test. If you provide verifiable video evidence showing that a single racist epithet was hurled as you walked among the tea partiers, or you pass a simple lie detector test, I will provide a $10K check to the United Negro College Fund.