Japan will join France and the United States in a series of land and sea drills for the first time in May next year, offering a counterweight to increased Chinese military activity in the Indo-Pacific region, the Sankei newspaper said on Sunday.

Reuters reports one of Japan’s uninhabited outlying islands will be the focus, aimed at providing relief efforts during a natural disaster.

Parts could also form the basis for a defence against attack, the paper said.

The joint exercises aim to send a message “aimed at China,” which claims Japanese-controlled islands in the East China Sea, while reinforcing freedom of navigation as one of the central pillars of the rules-based international order

The alliance comes after Japan announced last month it is strengthening military cooperation with Australia.

The new Japan/Australia agreement comes after recent calls for the creation of a regional NATO-type defence alliance to counter China in a charged geopolitical landscape across Asia and the Indo-Pacific.

To that end India, the U.S., Australia and Japan conducted joint naval exercises in a public show of mutual support during November, as Breitbart News reported.

Now France and the U.S. will join them in very publicly backing Japan.

“We want to demonstrate our presence to the region and send a message about Japan-France cooperation,” Admiral Pierre Vandier, chief of staff of the French navy, told Sankei in a separate interview.

The Royal Navy (RN) is also aiming to left the British presence in the region.

In 12 months time a fleet led by the RN’s largest-ever warship, the £3 billion, 65,000-ton aircraft carrier HMS Queen Elizabeth, will be in Asia. 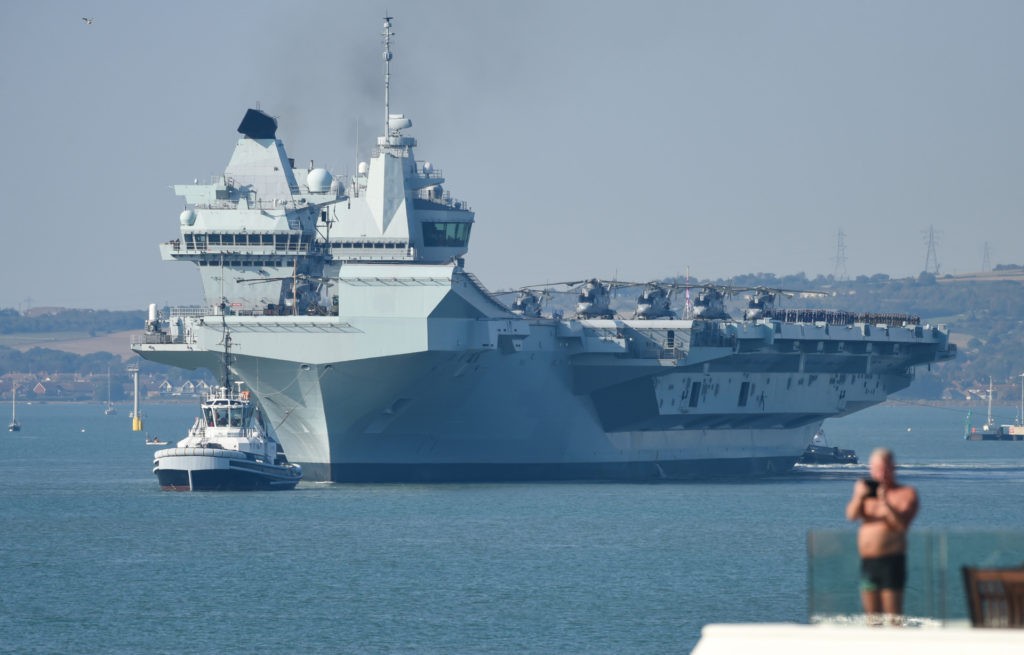 HMS Queen Elizabeth departs from Portsmouth, England, on September 21, 2020. The £3 billion aircraft carrier was due to sail last week but was delayed due to high easterly winds. The 65,000-ton aircraft carrier’s entire crew has been retested for Covid-19 after ‘fewer than 10’ tested positive. (Finnbarr Webster/Getty Images)

The carrier will embark a squadron of Royal Air Force F-35B fighter jets as well as a squadron of U.S. Marine Corps (USMC) F-35Bs.

The Queen Elizabeth will be accompanied by approximately nine to 10 other warships, a mix of destroyers, frigates, support ships and nuclear submarines, possibly including a vessel from a NATO ally.

The RN flotilla will almost certainly be calling at Changi Naval Base in Singapore, the Diplomat reports.