Amusingly, the Chinese Communist paper took it as a given that Trump’s Mar-a-Lago resort home in Florida was raided as part of a Democrat political operation – that’s how they roll in Beijing, after all. 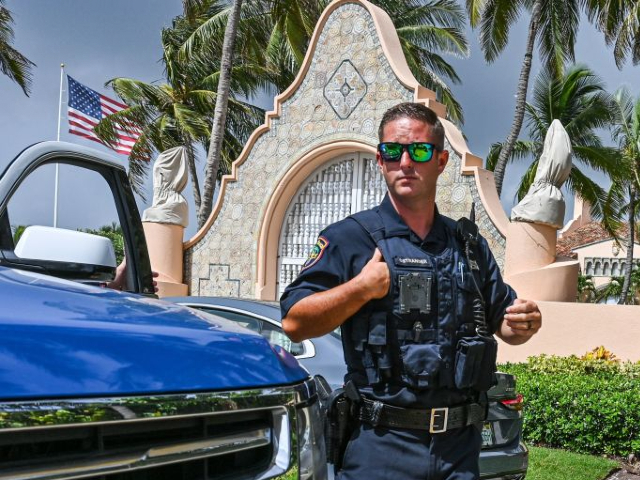 Local law enforcement officers are seen in front of the home of former President Donald Trump at Mar-A-Lago in Palm Beach, Florida on August 9, 2022. (GIORGIO VIERA/AFP via Getty Images)

The Global Times was comfortable with the notion of the ruling party using law enforcement to harass its political enemies, but warned the Biden administration not to go too far, lest it produce a backlash it cannot control:

Chinese experts and netizens are also paying close attention to the case with analysts saying the US democratic system might be more dysfunctional and the chaos like the Capitol Hill incident in 2021 will likely repeat with the upcoming midterm elections as well as the next presidential election in 2024.

The Democrats are facing a dim election prospect, as US President Joe Biden is failing to solve economic problems at home and struggling with a diplomatic issue abroad sparked by House Speaker Nancy Pelosi’s provocative visit to the island of Taiwan. The international community is watching in despair and confusion at US’ troubled policies. Many experts believe the Democrats will likely lose badly in the midterm elections this year and the 2024 presidential election despite the current investigation against Trump. Republicans, the experts continue, will revenge once they regain political power, and Biden’s son Hunter Biden could be the most likely target.

Lü Xiang, an expert on US studies at the Chinese Academy of Social Sciences, told the Global Times that “this case is a bit surprise for the Democrats’ campaign. Previously, Democrats targeted Trump in mainly two cases – the investigation about the storming on Capitol Hill by Trump supporters in January 2021, and the investigation on Trump and his family members’ tax and loan issues conducted by New York State, but these two efforts have seen limited progress, said Lü.

The US partisan struggle between Democrats and Republicans has been further escalated after #Mar-a-Lago, Donald Trump’s resident in Florida, was searched by the FBI on Monday local time. Chinese experts and netizens are also paying attention to the case…https://t.co/YFrpNZlrwW pic.twitter.com/vNmIN54xDb

In China, political leaders who become inconvenient to dictator Xi Jinping and his Communist Party elite are routinely charged with “corruption” and made to disappear. Sometimes the suspects help the prosecution along by killing themselves.

Alas, the Global Times and its experts doubted either President Joe Biden or his successors would achieve Chinese levels of efficiency at political persecution. Instead, “Chinese experts” predicted America would remain a “dysfunctional country” riven by “endless partisan struggle,” with Republicans likely to launch their own political prosecutions of Democrats once they gain power.

The Global Times quoted a “Beijing-based expert” who said the “ruling party” in the United States “always weaponizes the ‘judicial and law-enforcement’ authorities to crack down on the opposition with everything they have.”

“Democrats, especially Biden, needs to be aware that they are not clean, and it’s a pretty sure bet the Republicans will take over the House after the midterm election, so Biden will have a difficult second half of his term, and he also needs to take the risk of revenge from the Republicans,” Lu said, displaying more confidence in the fighting spirit of GOP leaders than most Republican voters can muster these days.