Joseph Offutt is the patriotic Texan who held an American flag for 14 hours outside the reopened Curtis Culwell Center, following the failed terrorist attack against the Mohammed Art Exhibit and Cartoon Contest in Garland on May 3.

News outlets spotlighted the 21-year-old Garland native who raised his flag as a testament to American liberty, urging his countrymen to “stand strong” against fear, especially after ISIS claimed responsibility for the thwarted shootings. For Offutt, this is about much more than TV news opportunities. His pledge of allegiance is good for 365 days a year, one young man’s statement of love for his country.

He calls it the American Challenge, and he invites like-minded locals to join him over social media. Offutt has since relocated to a more convenient intersection nearby, where he shows up with his American flag every day after work, Monday through Friday, and holds his post all day on Saturdays. He only takes Sundays off. He says he would be on that street corner even if no one showed up, but that hasn’t happened yet. People from all over North Texas have come to stand with him, bringing their own flags. 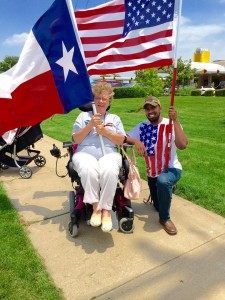 In recent wet weather, when the Dallas Metroplex took a pounding, Offutt and others stood proudly in the rain. Out of respect for Old Glory, he asked them to substitute signs for their flags while it was raining.

Breitbart Texas visited with Offutt on Day 11. He wasn’t alone on his street corner for long. Area resident Israel Alderete was so moved by what Offutt was doing that he came over to ask each flag-waver if he could buy them a lemonade or cola at a nearby fast food restaurant on that warm Saturday afternoon.

He told Breitbart Texas that he was third generation Mexican-American and appreciated what everyone was doing by coming out every day with American and Texas flags.  “I love our country, I just love this country,” he declared with glee.

Garland resident R. Harris was leaving the gym and heading to work when he came by to shake Offutt’s hand. He told Breitbart Texas he came over to show his support because “when someone is standing for something, I want to stand with him.” 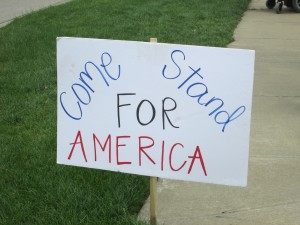 In his second week, Offutt was tickled to see so many of the younger generation – his generation – come to stand with him. He said it was fantastic “to see they care about our future.”

He was equally delighted that veterans, army wives, “and wives of veterans from the Vietnam era” have come out with their flags.

“We all need to stand together,” said Offutt, who is in the process of joining the National Guard. He told Breitbart Texas it has been been incorrectly reported that he is a Marine. He wanted to go on the record to clear this up out of respect for those who serve, and have served. Although he did enlist, he said he was medically discharged in 2013.

This American Challenge has been full of surprises for Offutt. He told Breitbart Texas that on Day One, a Muslim family stood in solidarity with him outside the Culwell Center. “They were so scared to walk up. They kept saying. ‘We’re not ISIS but thank you for doing this.’”

“Don’t be afraid, we’re Americans,” read the first sign Offutt held after learning ISIS claimed credit for the Garland shooting. He said the Muslim family were fellow Americans, and it gave him tremendous hope that they stood with him in a terrible situation. It also helped inspire him to come out every day afterward.

Offutt also said an Iraqi gentleman asked to stand with the group on another day at its new location. Texans of varying racial, religious and ethnic backgrounds have participated in the American Challenge, according to Offutt.

Once the American Challenge moved down the street to its current location, it got noticed. In addition to flags, people hold signs that read “Honk, if you love America” and “God bless America,” plus other placards that salute Garland police, firemen, and the US military. 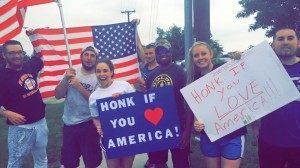 A Garland fire truck was among the constant stream of vehicles that waved and honked their horns in approval as they passed the now-familiar flag procession on the intersection of North Garland Avenue and Naaman Forest Boulevard while Breitbart Texas was there. Some even slowed down their cars to take photos of the patriots.

Younger participants who keep returning to the procession include 23-year-old Tiffany, a Sachse mother of four. She told Breitbart Texas she has attended the American Challenge since Day 3. On this day, she brought her 8th month-old daughter, who was well-protected in a stroller. Later, she was joined by her husband and toddler son. She explained her daily attendance by declaring, “We need to show that no matter what the religion or the race, we stand together.”

Another flag-waver named Jennifer, who drove in for her second visit from the Metroplex suburb of Mesquite, said it was all about the “purpose.” 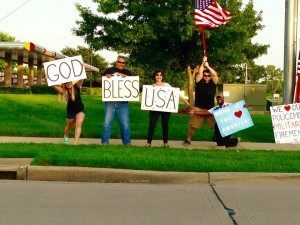 Offutt said a happy benefit of his demonstration has been making many unexpected new friends. Every day they man their street corner, they remain true to the ideals behind the American Challenge.

“Don’t let the propaganda scare you,” Offutt summed up his feelings after the Garland shooting. “We’re the greatest country ever. We’re the strongest country in this world. They didn’t target Garland. We’re not the target. At the end of the day, if they were to mess with us as Americans, with us Texans, especially, we’re not going to be scared.”

Well, you know what they say – don’t mess with Texas.