HOUSTON, Texas – Two MS-13 gang members appeared, smiling and waving at television cameras, before a state criminal court on charges of kidnapping and raping a 14-year-old girl and murdering another. The pair allegedly participated in satanic rituals during the attacks.

Diego Rivera, 18, and Miguel Alvarez-Flores, 18, turned around, and smiled and waved at television cameras shortly before having the charges against them read in open court. The two men stand accused of the brutal rapes of two young girls and the murder of one. The murdered girl was allegedly killed as part of a satanic ritual, KTRK ABC13 reported.

Court records obtained by Breitbart Texas revealed that Alvarez-Flores is a foreign national from El Salvador. Rivera’s birthplace and nationality have not yet been revealed. Court records indicate Immigration and Customs Enforcement officials have placed immigration holds on both men. Breitbart Texas reached out to ICE officials for additional information. No response was immediately available.

The surviving victim, a 14-year-old Houston girl, told detectives she had run away from school and met the two men. They took her to an apartment where they got her high and drunk before she was sexually assaulting by a man known as “Flaco,” court records revealed. The two men then took the young girl to another apartment where they held her for 14 days. Six MS-13 gang members were living at the domicile.

Throughout the ordeal, the young girl was forced to ingest drugs and alcohol. She remained intoxicated for the duration of her two weeks in captivity.

At one point, Alvarez-Florez, referred to as “Diabolical,” tattooed the girl’s leg with an image of the Grim Reaper. The tattoo runs the entire length of her calf. The gang member decorated the inside of this apartment as a shrine dedicated to their satanic beliefs, KTRK reported.

While at this apartment, the victim met another girl they called “Genesis.” She was also allegedly held against her will, the documents revealed.

Police and medical examiners have yet to determine the identity of the woman known as “Genesis.” The following photo of the deceased girl and some of her belongings were released in an effort to obtain her identity. 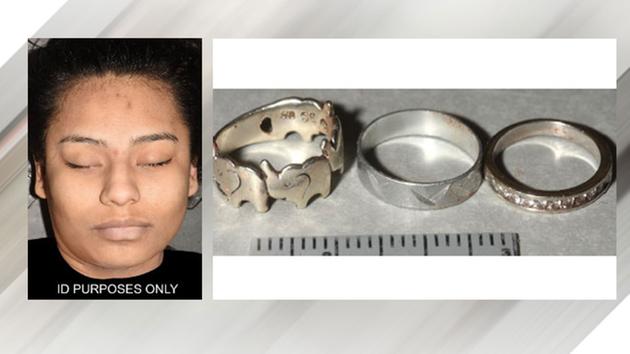 Following an outburst by “Genesis” against the satanic rituals, Alvarez-Flores offered a lit cigarette to the satanic statue. He then told his fellow gang members “the Beast” did not want a material offering. Instead, he claimed, “the Beast” wanted a soul.

When the teenage girl awoke the following morning, “Genesis” was gone. Her body was later found alongside a road in Houston.

Following his arrest, Rivera reportedly told police the details surrounding the final hours of “Genesis’” life. He said Alvarez-Flores approached him and told him “Prepare yourself. It’s your turn.” He said he was then instructed to kill “Genesis.”

They stopped their car and had “Genesis” sit down in the grass alongside the roadway. Rivera said Alvarez-Flores handed him the gun and ordered him to kill the girl.

Prosecutors accused Rivera of killing “Genesis” with a single gunshot to the head. Alvarez-Flores allegedly went back to the girl and shot her in the chest.