Border Patrol agents apprehended nearly 200,000 migrants who illegally crossed the border from Mexico during the month of July. This represents an increase of more than 418 percent over the same month last year and a 12 percent increase over the previous 21-year-high mark set in June.

“CBP continues to take necessary measures to safely manage the Southwest Border and protect the health of communities, personnel, and migrants themselves, U.S. Customs and Border Protection Acting Commissioner Troy Miller said in a written statement on Thursday.

Despite the “necessary measures,” the apprehension of migrants illegally crossing the border from Mexico has drastically increased every month since President Joe Biden took office in January and reversed the highly successful programs put in place during the Trump administration. In February, President Biden’s first full month in office, apprehensions jumped to 97,642. Since the end of January, apprehensions jumped from 75,142 to 199,777 — an increase of 142 percent in six months, according to the CBP’s July Southwest Land Border Encounters report. 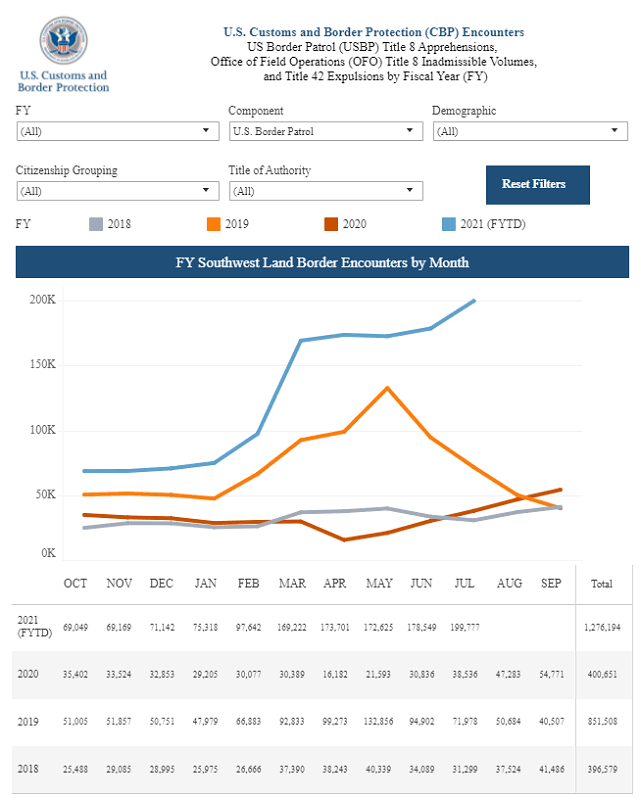 The Rio Grande Valley Sector in South Texas continues to see massive increases in what is already the busiest sector in the nation. Agents in this sector apprehended 80,306 migrants in July — an increase of 961 percent over the same month last year. So far this year, RGV Sector agents have apprehended more than 412,000 migrants so far this fiscal year. This is up 518 percent over the same period last fiscal year, officials reported.

“CBP has also adapted to changing dynamics between ports of entry along the Southwest Border, continuing to take steps to mitigate the spread of COVID-19 by expelling roughly half of those encountered under CDC’s Title 42 public health authority,” Commissioner Miller concluded in his remarks.