The X-Men billboards, which have been spotted in New York and Los Angeles, feature a dramatic scene from the film with the tagline: “Only the strong will survive.”

I know it's a movie scene, but they're also putting it on ads. 😕 pic.twitter.com/conG7YkhNt

In a statement to the Hollywood Reporter, McGowan sharply criticized the studio behind the film for using a scene depicting “casual violence against women” to promote it.

“There is a major problem when the men and women at 20th Century Fox think casual violence against women is the way to market a film,” McGowan told THR, adding:

“There is no context in the ad, just a woman getting strangled. The fact that no one flagged this is offensive and frankly, stupid. The geniuses behind this, and I use that term lightly, need to to take a long hard look at the mirror and see how they are contributing to society. Imagine if it were a black man being strangled by a white man, or a gay male being strangled by a hetero? The outcry would be enormous. So let’s right this wrong. 20th Century Fox, since you can’t manage to put any women directors on your slate for the next two years, how about you at least replace your ad?” 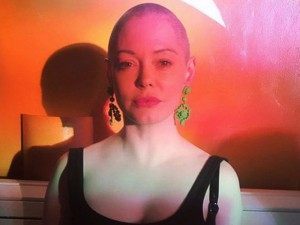 The 42-year-old Planet Terror star was not the first person to take issue with the advertisements; according to tweets collected by the BBC, the backlash against the billboards was underway well before the film’s May 27 release date.

I love that new X-Men poster that I have to see on every street corner with the giant man choking the small woman! Cool movie, looks like!

Forget the X-Men movie, let's talk about this terrible poster. What's up with that nonchalant choke and baby arm? pic.twitter.com/jpTwgbVsKj

“I’ll close with a text my friend sent, a conversation with his daughter,” McGowan added to THR. “It follows: ‘My daughter and I were just having a deep discussion on the brutality of that hideous X-Men poster yesterday. Her words: ‘Dad, why is that monster man committing violence against a woman?’ This from a 9-year-old. If she can see it, why can’t Fox?”

20th Century Fox has not yet responded to the backlash.

X-Men: Apocalypse opened atop the box office in May, taking in $65.8 million in its first weekend of release. The film has earned $281 million worldwide since its release, according to Box Office Mojo.