Cast members from the TV show The West Wing plan to campaign for Hillary Clinton in Ohio this weekend, while the Democratic nominee prepares for her first debate performance.

The throwback message will feature actors Richard Schiff, Allison Janney, Bradley Whitford, Dulé Hill, Joshua Malina and Mary McCormack, who played the characters Toby, C.J., Josh, Charlie, Will and Kate, respectively, in the long-running television series about the fictional presidency of Josiah Bartlett, who was played by actor Martin Sheen.

The events will take place in over a half-dozen cities across Ohio as the actors will explain to supporters why they are supporting Clinton in the 2016 race.

The deadline for registering to vote in Ohio is October 11.

“I believe we’re in a terribly dangerous situation right now, where a person — I’m not talking about his racist statements — he doesn’t know anything,” the 55-year-old Oscar-winning screenwriter said. “It feels to me like he’s simply… Mrs. Clinton uses a gentle word when she says he doesn’t have the temperament to be in the White House.”

The cast of the show — which won four consecutive Emmy Awards during its first four seasons — has participated in real-life political events before.

In April, actress Allison Janney, who played press secretary C.J. Cregg on the show, surprised reporters in the White House briefing room by appearing in character to deliver the morning’s announcements. 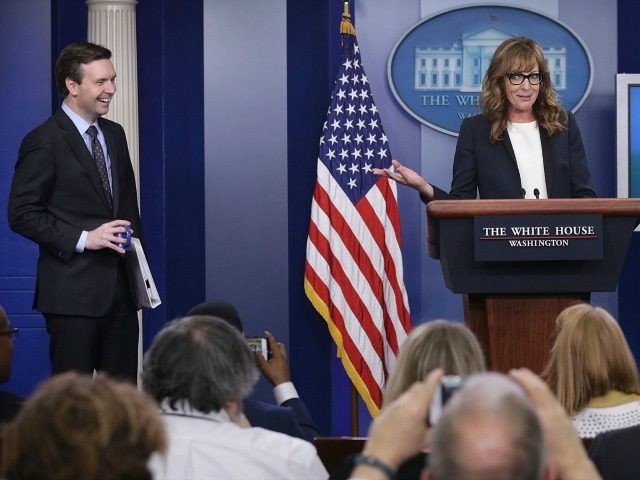 In January, cast members including Martin Sheen, Bradley Whitford and Janney appeared in a video for the White House to promote its “Big Block of Cheese Day” — familiar to fans of the show — in which Obama administration officials answered questions from the public on social media.