Cuban anti-communist dissidents took to the internet Thursday to demand the Castro regime stop inviting global tourism to the country while the rest of the world deals with a pandemic of the highly contagious Chinese coronavirus, noting Cuba’s destitute healthcare system and shortages of basic hygienic goods.

At press time, the Castro regime has reported 16 cases of coronavirus on the island, nearly all tourists carrying the virus when the arrived, and one death among them. Havana has issued statements refusing to close the nation’s schools and inviting global tourists to choose Cuba as a vacation destination, a marked departure from nearly all the world’s governments, which have closed their borders and urged their citizens not to travel.

The Cuban military controls the island’s entire tourism industry, investing the billions in annual revenue in maintaining the communist police state and repressing pro-democracy dissidents at home and in its colony, Venezuela. The Ministry of Tourism has not urged tourists to change plans or organized screening of visitors.

To the extent that the Cuban Communist Party is acting to limit the spread of the Chinese coronavirus on the island, it is asking local parents to provide schools with basics like soap and water, which many Cubans cannot afford and have no access to. Cuba’s communist ration system greatly limits what products citizens can buy and why, and also ensures a catastrophic, unproductive economy that cannot keep stores stocked even if citizens could buy these items.

The call to bring soap and water to schools, rather than the communist government fulfilling its promises to provide for the people, have made many mothers livid.

“There is no soap in my house to guarantee the necessary hygienic-sanitary measures, now tell me how am I going to find soap to send to the school?” Jéssica Miranda, a mother affected by the policy, told the independent outlet Cubanet. “They asked us parents to bring everything: masks, chlorine, soap, even water. Five masks because they have to be changed every two hours, and I can’t even find one.”

Prevented from organizing mass protests by commonly held medical advice for people to avoid crowds to prevent the rapid spread of coronavirus, Cuban anti-communist dissidents have taken to posting photos and videos on social media demanding the Castro regime take proper measures to protect its citizenry. In a digital protest from their homes Thursday, dissidents demanded the closure of points of entry and better investment in the near-collapsed Cuban healthcare system.

“The Castro dictatorship lies. In a time when the coronavirus pandemic is extended throughout the world, the communist regime tries to sell a false image of what is happening in Cuba to the international community,” Arianna López, wife of political prisoner Mitzael Díaz Paseiro, said in a video shared online by the Assembly of the Cuban Resistance, a pro-democracy advocacy group. “World, there is nothing in Cuba. In Cuba, there are no resources, no food, no medicine. Cuban mothers have no way of facing a quarantine.”

“It’s up to Cubans, ourselves, to take the measures … this regime does not want to close the airports, it keeps receiving tourists, it keeps attempting – with who knows what macabre intentions – to make us sick,” López continued. “It isn’t known what is going to happen. The future of the Cuban is uncertain.”

López noted that Cuba has not only put into place no measures whatsoever to prevent the spread of the virus, ordinary life in Cuba places the average citizen at high risk, due to the need to stand for hours on ration lines for basics such as bread, chicken, and eggs.

“The interminable lines continue and this is one of the principal sources of contagion, the crowding of people, but if Cubans do not get on a line, they die – if not [killed] by coronavirus, by hunger,” López explained.

In another video message, a group of dissidents of the Coronel Vicente Méndez group accuses the Castro regime of “an attack on the Cuban people” and “crimes against humanity” for failing to protect the Cuban people from the pandemic.

“While all the governments, left-wing and right-wing, throughout the world have shut their borders and put their peoples in quarantine, the Castro communist regime keeps its borders open and exhorting tourists from around the world to come into Cuba,” a spokesman denounced, “knowing the endemic problem that the healthcare system here has.”

Others nationwide protested by simply photographing themselves holding signs up reading “enough,” a call for an end to the current policies. 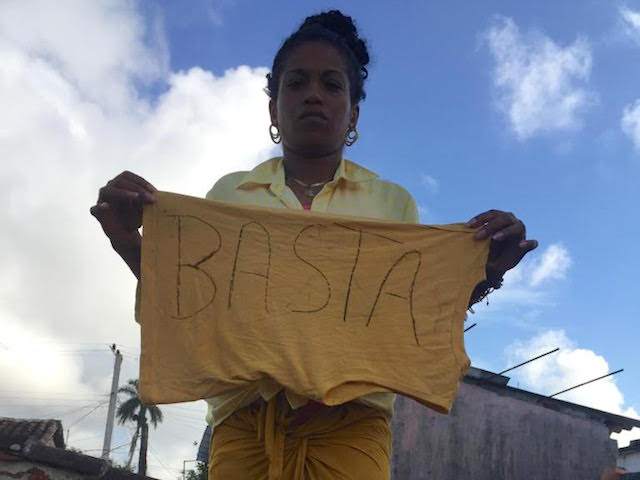 Some dissidents also stuck handwritten protest signs in public areas. In one such instance, under government graffiti celebrating 60 years of communism, dissidents posted a sign reading, “In Cuba, there are no resources to fight the coronavirus.” 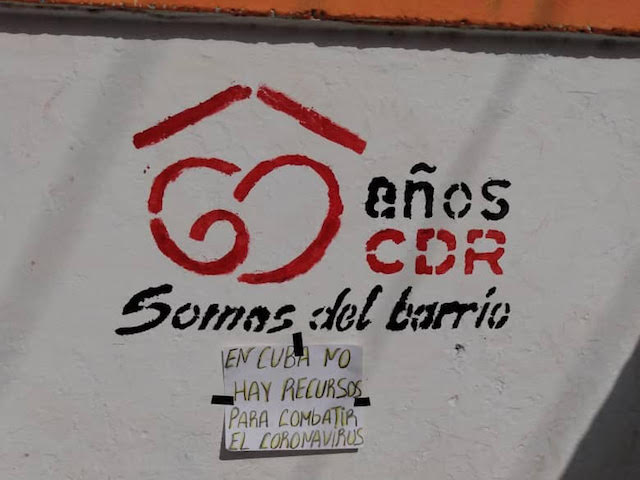 Cuban protesters place a sign reading, “In Cuba there are no resources to fight coronavirus” under communist propaganda. Cuba has refused to impose social isolation measures and is advertising tourism to the country during the global Chinese coronavirus pandemic. March 19, 2020. (Assembly of the Cuban Resistance).

In addition to keeping schools open and inviting tourists, the Castro regime is not checking incoming visitors’ fevers or doing any screening. It has suggested to visitors that they isolate themselves if arriving from affected countries – at this point over 100 countries worldwide – and has adamantly defended its choice of keeping the borders open.

“The Cuban state has not made the decision yet to close borders with any country, but it has established closed monitoring of all passengers, especially those coming from countries of [high] risk,” Francisco Durán, the national director of hygiene and epidemiology at Cuba’s Health Ministry, said on Thursday. “Quarantines are established depending on transmission and, at this moment, cannot be justified.”