TEL AVIV – The American Jewish Committee (AJC) continued its crusade against the New York Times over its “grotesquely” anti-Semitic cartoon, calling on the newspaper to make good on its promise to make “significant changes.”

“We note the @NYTimes’ promise of ‘significant changes’ following its publication of a grotesquely antisemitic cartoon on Thursday and its offensive non-apology apology yesterday and look forward to seeing those changes in practice. Actions speak louder than words,” the AJC said on Twitter.

The “offensive non-apology” referred to an earlier statement issued by the Times in which the newspaper said publishing the cartoon was “an error in judgment.”

We note the @NYTimes' promise of "significant changes" following its publication of a grotesquely antisemitic cartoon on Thursday and its offensive non-apology apology yesterday and look forward to seeing those changes in practice. Actions speak louder than words. https://t.co/KNWQ2kA4ir

That apology was not accepted by the AJC, which said the cartoon “would not have looked out of place on a white supremacist website.”

The cartoon, published in Thursday’s print edition, featured a blind, Jewish President Donald Trump with a skullcap on his head being lead by a guide dog with the face of Israeli Prime Minister Benjamin Netanyahu and a Jewish star of David around its neck.

On Sunday, the Times released another statement, this time saying it was “deeply sorry” for the incident, blaming it on a single editor.

“We are deeply sorry for the publication of an anti-Semitic political cartoon last Thursday in the print edition of The New York Times that circulates outside of the United States and we are committed to making sure nothing like this happens again,” the paper said in a statement.

“Such imagery is always dangerous, and at a time when anti-Semitism is on the rise worldwide, it’s all the more unacceptable,” it said.

“We have investigated how this happened and learned that, because of a faulty process, a single editor working without adequate oversight downloaded the syndicated cartoon and made the decision to include it on the Opinion page. The matter remains under review, and we are evaluating our internal processes and training. We anticipate significant changes.”

The cartoon was condemned by Vice President Mike Pence, who accused the paper of anti-Semitism.

We stand with Israel and we condemn antisemitism in ALL its forms, including @nytimes political cartoons. https://t.co/tPbGqDBwza

“The anti-Semitic caricature published by the New York Times is shocking and reminiscent of Nazi propaganda during the Holocaust,” Erdan said.

“We expect anyone who truly fights racism and hatred of Jews to demand an apology from the newspaper and fire those responsible for publishing a Nazi-style cartoon in the newspaper.”

The cartoonist, António Moreira Antunes, 66, is a well-known Portuguese political caricaturist who has in the past drawn graphics critical of Israel. 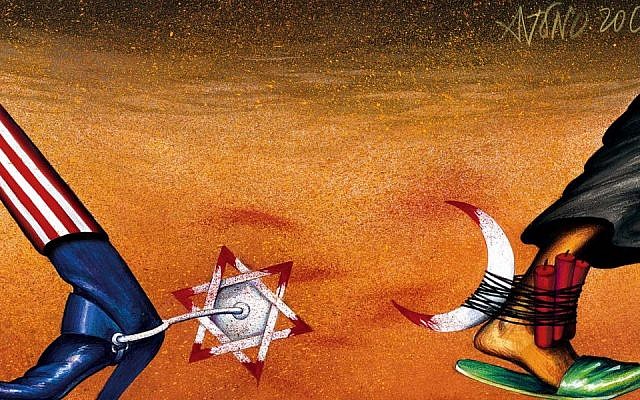 A 2006 cartoon by António Moreira Antunes with a bloodied Star of David as America’s spur in the Middle East — inferring that radical Islamists use terror attacks to cause harm while Jews use the U.S.

Netanyahu’s son Yair compared the graphic to the paper’s coverage — or lack thereof — of the Holocaust.

“You’re an anti-Semitic newspaper!” he tweeted. “The New York Times intentionally hid the news of the annihilation of millions of Jews in Europe during World War II!”

He also linked the cartoon to Saturday’s shooting attack at a synagogue in California.

Some reports say that the shooter of the Chabad synagogue in CA was saying that Trump is the slave of the Jews. I’m sure this cartoon in the NYT have nothing to do with it pic.twitter.com/BZ9xG6ItrZ

“I have no words for flagrant anti-Semitism on display here. Imagine this was in something other than a leftist newspaper?”

“I thought the cartoon was disgusting,” he told the Times of Israel. “I thought it was despicable.”

“I wouldn’t even credit it as a cartoon,” Greenblatt said. “It was anti-Semitic propaganda of the most vile sort. Not only does it not belong in the New York Times, but it in any credible news outlet. It was unconscionable.”