Iran used tugboats to move a fake wooden aircraft carrier to the strategic Strait of Hormuz on Sunday as naval tensions between Tehran and the U.S. rise, satellite photographs show.

An image from Maxar Technologies shows an Iranian speedboat closing on the mock carrier as workboats finished towing her into the contested strait from the Iranian port city of Bandar Abbas.

Just what purpose Iran has in mind for the elaborate fake is yet to be determined, however its existence is nothing new to U.S. intelligence sources.

Any attack on the defenseless vessel will mimick one that took place in 2015 and targeted what was essentially a crewless wooden barge outfitted to look — but not operate — like a carrier:

The USS Nimitz, the namesake of the class, just entered Mideast waters late last week from the Indian Ocean, likely to replace the USS Dwight D. Eisenhower in the Arabian Sea, AP reports.

The U.S. Navy’s Bahrain-based 5th Fleet, which patrols Mideast waterways, remains “confident in our naval forces’ ability to defend themselves against any maritime threat,” said spokeswoman Cmdr. Rebecca Rebarich when asked about the faux carrier’s movements.

“We cannot speak to what Iran hopes to gain by building this mockup, or what tactical value they would hope to gain by using such a mock-up in a training or exercise scenario,” Rebarich told The Associated Press. “We do not seek conflict, but remain ready to defend U.S. forces and interests from maritime threats in the region.” 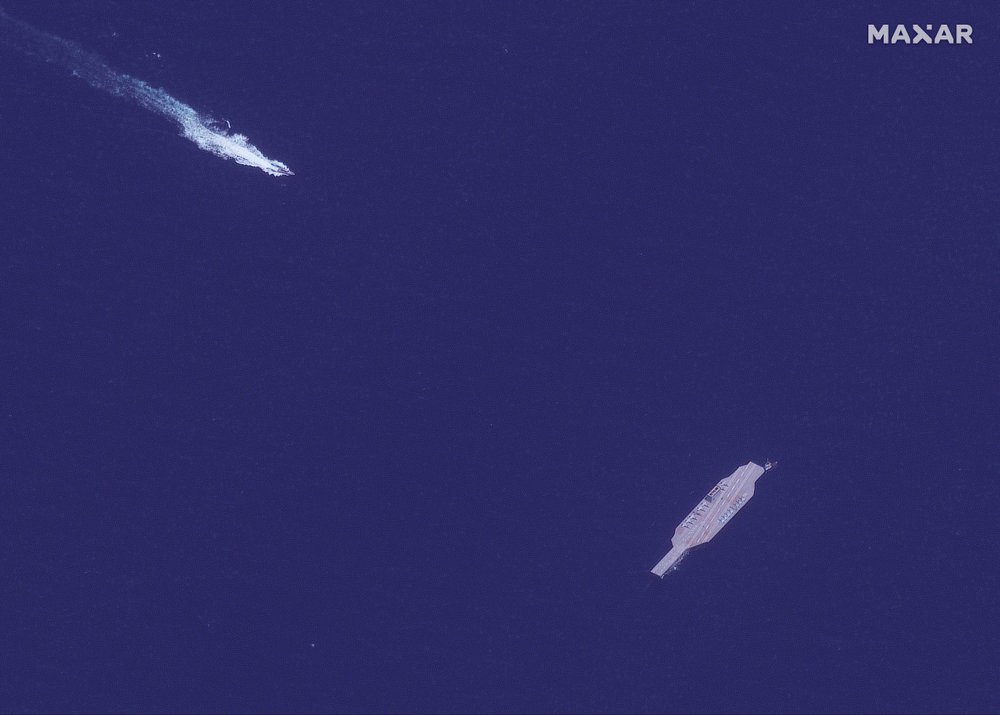 In this July 26, 2020, satellite photo provided on July 27, by Maxar Technologies, an Iranian fast boat, top left, approaches a mockup aircraft carrier built by Iran in the Strait of Hormuz. Satellite photographs released Monday, July 27, showed Iran has moved the aircraft carrier out to sea likely for naval drills amid heightened tensions between Tehran and the U.S. (Maxar Technologies via AP)

Earlier this year Iran proudly announced a total of 112 speedboats had been delivered to its naval forces, with Islamic Revolutionary Guard Corps (IRGC) Commander Major General Hossein Salami choosing the moment to warn all foes in the Persian Gulf, including the U.S. Navy, the craft symbolise “what will become a hell for the enemies of Iran and Islam.”

U.S. President Donald Trump was neither impressed or threatened by the mass speedboat addition:

I have instructed the United States Navy to shoot down and destroy any and all Iranian gunboats if they harass our ships at sea.

“Everyone is ready to sacrifice his life. We will show this in practice and we will hit the enemy. Today, we announce that wherever the Americans are, we are by their side and they will feel our presence more in the near future,” he added.