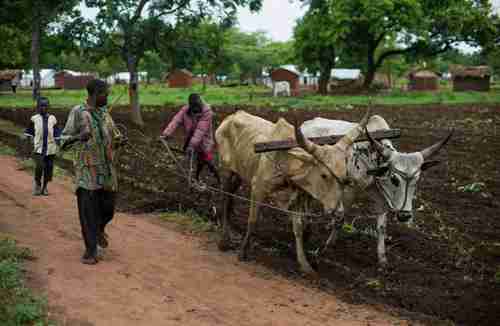 Two former presidents of the Central African Republic (CAR) signed a “peace agreement” in a meeting in Nairobi, Kenya, several days ago. One was Francois Bozizé, the Christian former president, who was ousted in a coup in March 2013 by the other participant, Michel Djotodia, the Muslim former president, who served until January 2014. The ceremony was kind of laughable, since the agreement was meaningless from the moment it was signed.

After Djotodia’s coup took place in March 2013, Muslim Seleka militias began committing atrocities, particularly targeting the Christian constituencies of the deposed Francois Bozizé. In December 2013, French Foreign Legion peacekeeping troops arrived to disarm the Seleka militias, but then the Christian anti-balaka militias “rushed into the vacuum,” and began committing atrocities in 2014, for revenge against the Selekas.

Throughout 2014, various African Union and United Nations committees and conferences have been looking for ways to bring the violence to an end. On Thursday, UN Secretary-General Ban Ki-moon asked the Security Council to approve 1,030 more peacekeepers to bring the total to nearly 13,000. Just to put that number in perspective, the NY City police department has over 34,000 uniformed officers for just one city, while CAR is an enormous country the size of France. However, NY City has 8 million people, while CAR has 5 million.

Considering the situation in CAR, 13,000 peacekeepers is far too few. According to the UN, 438,000 people in are displaced within CAR, more than 423,000 people have fled to Cameroon, Chad, and the Democratic Republic of Congo (DRC), and 2.5 million people are in urgent need of humanitarian assistance.

Michel Djotodia was interviewed by the BBC on Thursday and asked if he would be able to return to Bangui, the capital city, and take part in elections planned for later this year (my transcription of simultaneous translation):

The conditions are not right. I can’t.

The provisional government is having trouble protecting even the palace in Bangui. So what would I do? I can’t return. There must be some security. That’s why I’m here – to try and bring back peace and security to the country.

But the people don’t want it. First of all, there aren’t even any institutions in CAR. The state as such no longer exists. The army has disappeared. The police doesn’t exist. Justice is on its knees. All these state institutions have practically vanished.

One, how can anyone claim that we’re ready for elections? Two, the majority of Central Africans are outside the country. How can we organize elections? You’d have to take the ballot boxes on your head to Chad, Cameroon, and France, so that people could vote. Do you find that normal? It would make a mockery of CAR’s people.

The United Nations and Djotodia together describe a disintegrated country in total chaos. Most of the peacekeeping forces are concentrated around the capital city Bangui, and even there are not keeping much peace. The Muslim Selekas are mostly in control of the east, while the Christian anti-balaka militias are mostly in the west.

From the point of view of Generational Dynamics, CAR is in a generational crisis war, and it will not end until it has fully run its course, and reaches a climax.

CAR’s last generational crisis war was the 1928-1931 Kongo-Wara Rebellion (“War of the Hoe Handle”), which was a very long time ago, putting CAR deep into a generational Crisis era, where a new crisis war is inevitable.

The Kongo-Wara rebellion was nominally an uprising against the French colonialists, but it also had its share of the same kind of tribal violence that we are seeing today. After a crisis war like that ends, the survivors on both sides look back in horror at the acts that were perpetrated on both sides, and vow to devote the rest of their lives to making sure that nothing like that happens to their children or grandchildren. They succeed at that, but once the survivors have passed away, so that there is no one left with a personal memory of the last crisis war, then there is nothing to stop a new crisis war from starting, and that is what is happening now.

Many people are surprised at this narrative, mainly because they have never heard of the Kongo-Wara Rebellion. But just as young Americans today have heard of World War II, you can be sure that young people in CAR today, both Muslims and Christians, have heard of the Kongo-Wara Rebellion. And these young people know nothing of the horrors of that war. What the Muslims know is that their great-grandfathers were war heroes because they killed thousands of French and Christians, while the Christians have heard that their great-grandfathers were even bigger heroes, because they slaughtered even more Muslims.

Nigeria’s terrorist group Boko Haram invaded Niger on Friday, attacking two towns in a part of Niger that is already home to tens of thousands of refugees who have fled Boko Haram attacks back in Nigeria. On Wednesday and Thursday, Boko Haram attack a town in Cameroon, leaving nearly 100 dead and 500 wounded.

The Boko Haram insurgency is rapidly becoming an international war, with Cameroon, Niger, Chad and Benin all having pledged to send troops to fight Boko Haram. AP

After several days of large anti-Houthi public demonstrations, often violently disrupted by Houthi officials, the minority Houthis have completed their coup and taken complete control of Yemen’s government in Sanaa, replacing the elected parliament with a military council completely controlled by the Houthis.

The Shia Houthis are thought to be supported by Iran. They now have control of northern Yemen, but Sunni tribes in central and southern Yemen are not expected to accede to their control. These include the moderate Islamist Islah party, backed by Saudi Arabia, Al-Qaeda on the Arabian Peninsula (AQAP), and the secessionist groups in Yemen’s Southern Movement.

The main concern now is that tensions among these groups will spiral into a civil war, joining the growing war engulfing the Mideast. Probably the best scenario that can be hoped for is that Yemen will quietly become a disintegrated state, joining Libya, Syria and Iraq, joining Somalia and Central African Republic in Africa, with Nigeria on the horizon.

The previous government had depended on aid from Saudi Arabia to pay salaries. That aid is being cut off, and so the next crisis may be unable to pay salaries in one of the poorest countries in the world. Yemen Online and VOA and BBC