ROME — The Blessed Virgin Mary was “normal, educated normally, open to marrying, to starting a family,” states Pope Francis in a new book-length interview that is sending shock-waves through the Catholic Church.

“From the moment she was born until the Annunciation, to the moment she encountered the angel of God, I imagine her as a normal girl, a girl of today,” the pope declared in his interview with Father Marco Pozza, chaplain of the prison of Padua. “I can’t say she a city-girl, because she is from a small town, but normal, educated normally, open to marrying, to starting a family.”

The pope’s statement, part of excerpts from the new book published this week by Corriere della Sera, would seem to contradict a millennial Christian belief regarding Mary’s perpetual virginity.

Many of the fathers of the Church taught that the Virgin Mary had either a formal “vow of perpetual virginity” or at least a commitment to lifelong virginity and they used this teaching to explain Mary’s confusion when the angel Gabriel announced to her that she would conceive and bear a son, whom she would name Jesus.

Mary’s response to the angel — “How can this be since I do not know man?” (Lk 1:34) — would have been very strange, the fathers contended, if Mary had intended to have normal sexual relations with Joseph, her betrothed husband.

As just one example, Saint Gregory of Nyssa, writing in the 4th century, argued:

For if Joseph had taken her to be his wife, for the purpose of having children, why would she have wondered at the announcement of maternity, since she herself would have accepted becoming a mother according to the law of nature?

Saint Augustine of Hippo adopted the same line of reasoning in his treatise on the Virgin Mary.

“Mary answered the announcing angel: ‘How shall this be done, because I know not man?’ She would not have said this unless she had already vowed her virginity to God,” he wrote. 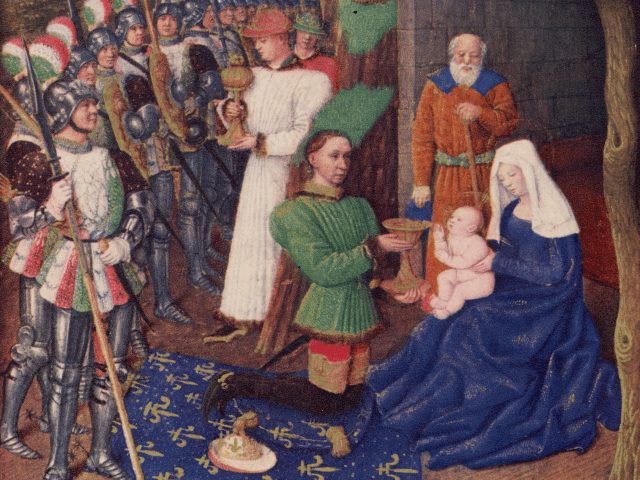 The three wise men kneeling before the newly born Jesus Christ and Mary and Joseph in a stable in Bethlehem. Original Publication: From the Book of Hours executed by Jean Fouquet for Etienne Chevalier (Photo by Hulton Archive/Getty Images)

In his book, Ave Maria, to be co-published by Rizzoli and the Libreria Editrice Vaticana, Pope Francis explores the Hail Mary prayer and emphasizes Mary’s normality.

“One thing I imagine is that she loved the Scriptures: she knew the Scriptures, she had done catechesis in a family environment, from the heart,” Francis said.

“Then, after the conception of Jesus, she was still a normal woman: Mary is normal, she is a woman that any woman in this world can imitate,” he said.

“No strange things in life, a normal mother: even in her virginal marriage, chaste in that frame of virginity, Mary was normal. She worked, went shopping, helped her Son, helped her husband: normal,” he added.

In the book, the pope contrasted what he sees as Mary’s normality with an elite attitude that makes people feel superior to others.

“Normality is living among the people and like the people. It is abnormal to live without roots in a people, without connection with a historical people,” he said. “In such conditions a sin — very much liked by Satan, our enemy — is born: the sin of the elite.”

“The elite does not know what it means to live among the people and when I speak of the elite I do not mean a social class: I speak of an attitude of the soul,” Francis said. “One can belong to a Church elite.”

“And the devil likes the elite,” he said.