WASHINGTON, DC — U.S. intelligence community (IC) leaders on Tuesday warned that the Islamic State (ISIS/ISIL) remains a menace to the United States, acknowledging that the terrorist group “still commands thousands of fighters” in Iraq and Syria and has expanded its jihadi “tentacles” beyond the Middle East and into various corners of the world “despite significant leadership and territorial losses.”

The IC’s assessment contradicted U.S. President Donald Trump and his administration’s assertion that the American-led coalition and its local allies have defeated ISIS.

So we see those [ISIS terrorists who] were engaged in Syria moving to other ungoverned spaces. We see the tentacles of ISIS and al Qaeda tactics in different places in the world — North Africa, the Philippines…so ISIS will continue to be a threat to the United States. We’re going to have to continue … to keep our eyes on that and our interests and the realization that this terrorist threat is going to continue for some time. 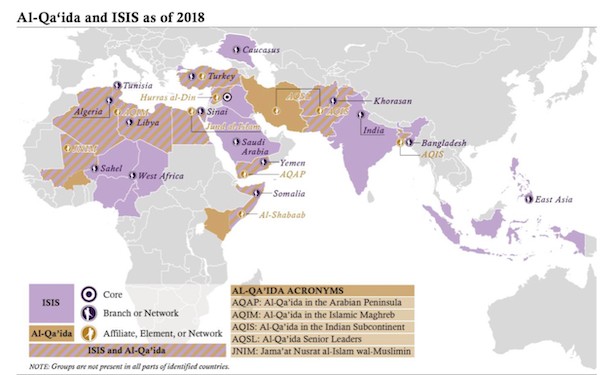 Coats made the verbal warning as part of the findings of the annual Worldwide Threat Assessment. The DNI chief released the assessment’s report in form of written testimony prepared for the Senate panel on behalf of the U.S. intelligence community.

U.S. intelligence leaders conceded that ISIS had suffered major leadership losses and near-total territorial annihilation at the hands of the U.S.-led coalition and local forces, but added that the group and its ideology would remain a menace for “years.”

It is of course accurate that ISIS has suffered significant leadership losses and near total loss of territorial control, but of course they’re still dangerous … and they’re the largest Sunni terrorist group, and they still command thousands of fighters in Iraq and Syria. So I think, the stance in the administration and supported by the IC is that we’re going to work very hard to finish that [anti-ISIS] mission and that’s another example where we must maintain a very robust monitoring regime and retain the ability to project into Syria if we need to.

President Trump has announced plans to withdraw the vast majority of the 2,000 American troops in Syria. However, there are no plans to pull out the estimated 5,000 U.S. troops from Iraq, where they are expected to retain the ability to go into neighboring Syria if necessary.

Coats stressed that “ISIS is intent” on its resurgence.

According to the most recent analyses, the U.S.-led coalition and its allies have pushed ISIS into an ever-shrinking small pocket of territory in northern Syria, near the Iraqi border. The jihadi group only controls about one percent of the area it once held but has managed to carry out lethal attacks from its last bastion.

The U.S.-allied Syrian Kurds and the Pentagon predicted the complete demise of ISIS’s territorial caliphate in “weeks.”

Despite territorial losses in Iraq and Syria, ISIS’s past actions and propaganda probably will inspire future HVE attacks, similar to the enduring influence of deceased al-Qa‘ida ideologues, especially if ISIS can retain its prominence among global jihadist movements and continue to promote its violent message via social and mainstream media.

Consistent with Breitbart News’ end of year appraisal of ISIS activities, the intelligence community noted that the group “maintains eight branches, more than a dozen networks, and thousands of dispersed supporters around the world.”

In March 2018, the U.S. Department of State (DOS) warned that ISIS was “adapting” to the fall of their so-called caliphate in Iraq and Syria by continuing their terror campaign “in all” other corners of the world – including Africa, Bangladesh, and Southeast Asia.

Using CRS figures — which do not cover all ISIS branches — Breitbart News estimated that ISIS affiliates outside Iraq and Syria currently boast between 7,000 and 9,000 jihadis.

That is in addition to the 20,000 to 30,000 ISIS members that the Pentagon inspector general believes are still inside Iraq and Syria.

The Worldwide Threat Assessment also listed Shiite terrorist groups, namely Iran’s narco-jihadi proxy Hezbollah and Tehran-backed militias in Iraq, as significant threats to the United States. Moreover, the assessment found that more than 17 years after the United States declared war on al Qaeda and the Afghan Taliban in response to the 9/11 attacks, both groups continue to terrorize.

“Al-Qa‘ida affiliates in East and North Africa, the Sahel, and Yemen remain the largest and most capable terrorist groups in their regions. … The network’s affiliate in South Asia provides support to the Taliban,” the report noted.

The Pentagon claims the Taliban is distancing itself from al Qaeda. Under an alleged draft peace deal, the Taliban has reportedly vowed to prevent terrorist groups like its ally al Qaeda and rival ISIS from using Afghanistan to attack the United States in exchange for a withdrawal of foreign forces.