Chinese officials and state media insisted on Monday the emergence of a previously unknown respiratory virus affecting hundreds and believed to have killed three people so far presented “no need to panic” and that the virus was not spreading significantly within China.

The Communist Party’s affirmation the spread of the virus was under control followed officials in Japan, Thailand, and South Korea all confirming infections. The Hong Kong-based South China Morning Post reported this weekend it had found evidence of at least two cases not documented in official data, including one in Shanghai, where Chinese officials had claimed the virus had not yet reached.

Those affected by the virus exhibit acute respiratory infection symptoms and many have developed severe pneumonia. The virus’s impact on the lungs suggests that it may be airborne; Chinese authorities urged individuals to wear masks to stop it from spreading.

The government of Hong Kong made face masks illegal last year in response to anti-communist protests; the region’s top court decreed the ban unconstitutional, but some police still attempt to enforce it.

Officials say the virus likely originated at a seafood market in Wuhan, a central Chinese city of 11 million people. According to the CDC, some of those diagnosed with carrying the virus – now identified as a new mutation of coronavirus – had no contact with the seafood market in question, suggesting the virus may spread from person to person, not just animal-to-person. Authorities in the region have implemented screening checks at airports and other ports of entry and local governments in areas like Hong Kong expanded police power to quarantine suspected patients.

Lunar New Year, a holiday celebrated throughout Asia and considered one of the heaviest travel seasons on the continent is on Saturday, exacerbating concerns of a regional or global outbreak. Yet the Global Times, an English-language Chinese Communist Party propaganda outlet, insisted on Monday that Chinese “experts” were not alarmed.

“Hospitals and authorities said the spread of the disease is no cause for panic and none was witnessed in the affected cities and hospitals that were visited by reporters has been felt at the scenes,” the Global Times noted in an article titled, “Chinese Hospitals Actively Respond to Outbreak of Wuhan Pneumonia; Analysts Suggest No Need to Panic.” Nurses and other medical staff at various hospitals quoted in the piece, but not identified by name, all insisted that the more immediate concern for them was influenza, not the new virus, as it is “peak flu season” and the symptoms are similar.

According to the Global Times, the hospitals were using “new and stronger measures” to screen potential patients and there was “no indication of panic” among health workers.

“There is no need to overreact. If you haven’t been in contact with someone with a fever or haven’t been to Wuhan, there is little chance you will get infected,” an unnamed nurse said. 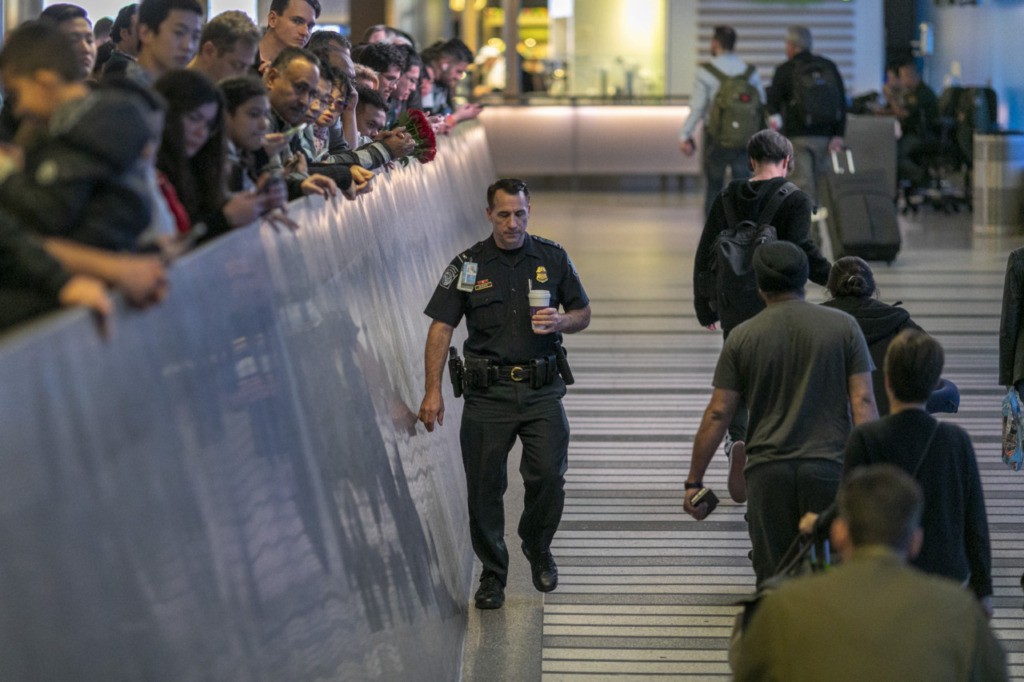 An airport officer walks past international travelers arriving to Los Angeles International Airport on the first day of health screenings for coronavirus of people coming from Wuhan, China on January 18, 2020 in Los Angeles, California. Coronavirus is a new type of virus similar in the same classification as SARS and MERS that has health officials concerned. The outbreak that has infected dozens of people in Wuhan and killed at least two. (David McNew/Getty)

The Global Times admitted in passing that the hospital its reporters visited “is not yet able to screen for the new coronavirus,” which calls into question what “new and stronger measures” it was using to screen for the virus. One of the specific measures identified, at a hospital in Shanghai, was the hanging of “a large banner showing tips.” It nonetheless quoted alleged experts praising the government of dictator Xi Jinping.

“We found the pneumonia virus in a very short time, which illustrates our improved overall ability. We found the new coronavirus independently in about 10 days, but during the SARS epidemic, it was foreign experts who found the virus after three or so months,” Chinese epidemiologist Zeng Guang told the propaganda outlet.

Sudden Acute Respiratory Syndrome (SARS) originated in China between 2002 and 2003 and killed 774 people before containment measures implemented stopped its spread. The culprit in that outbreak was also a previously unrecognized coronavirus.

In another article, the state newspaper insisted that “Chinese society should be vigilant but should not be in panic” as the Lunar New Year and accompanying Spring Festival approached. The newspaper also mildly scolded Xi’s predecessors for their handling of SARS.

“In the early moments of SARS, there was concealment in China. This must not be repeated,” the Global Times noted.
China’s state news agency, Xinhua, went out of its way to confirm Xi Jinping – whose tenure has been marred by a series of medical disasters – was personally overseeing China’s response to the new virus.

“President Xi Jinping has ordered resolute efforts to curb the spread of the novel coronavirus that caused cases of pneumonia,” Xinhua reported. “Instructing on the work related to the pneumonia situation, Xi … stressed putting people’s safety and health as the top priority.”

China’s National Health Commission offered little signs of confidence on Sunday, saying in a press statement that “the source of the new type of coronavirus has not been found, we do not fully understand how the virus is transmitted, and changes in the virus still need to be closely monitored.”

News of the virus spreading in Wuhan first surfaced in early January as officials in Hong Kong, whose government is slightly more publicly accessible than communist China’s, addressed concerns in the city of travelers bringing the virus with them. Hong Kong is currently in its seventh month of widespread protests against communism that routinely attract crowds of hundreds of thousands and, at its peak, assembled millions. At the time, Hong Kong had identified 30 individuals who showed signs of respiratory illness after traveling to Wuhan.By Monday, the Global Times said that number had tripled to 90 potential cases.

Chinese government statistics released Monday did not count any of the suspected Hong Kong cases as confirmed, suggesting other respiratory illnesses in that case. China has confirmed 217 infected patients according to Xinhua – 136 confirmed in the last weekend in Wuhan.

Two patients in Beijing have also tested positive for the new virus and one in Shenzhen, across the border from Hong Kong, according to the Associated Press. All had visited Wuhan.

Chinese officials first offered official word on the virus at the national level with a social media post this weekend, the South China Morning Post noted, that insisted that rumors of health workers secretly treating patients not documented as carrying the virus were untrue. On Monday, Foreign Ministry spokesman Geng Shuang elaborated on how the Communist Party is allegedly working to keep others abroad safe from the outbreak.

“Here I want to stress that since the outbreak, China has taken proactive measures to handle that in a serious and professional manner,” Geng told reporters at his regular briefing. “We have worked to formulate strict prevention and control scheme, spared no effort to treat the patients, properly managed close contacts, carried out in-depth epidemiological investigations, released the information on epidemic prevention and control in time, and launched campaign [sic] to raise the awareness of the disease.”

“We have shared with the WHO the information on the genome sequence of the new coronavirus as soon as possible,” Geng continued. “After receiving notification of cases from relevant countries, China has taken that seriously and stayed in close communication with all parties through bilateral and multilateral channels, while strengthening cooperation with all-out efforts to deal with them.”

The genome sequence is necessary to match patients with suspect symptoms with the virus and confirm they are not carrying a different infection. South Korea confirmed its first case on Monday, a woman who attempted to enter the country through Seoul after visiting Wuhan.