A new Gallup poll finds that President Barack Obama’s approval rating with working-class white Americans has fallen to just 27 percent, a record-low for his presidency. 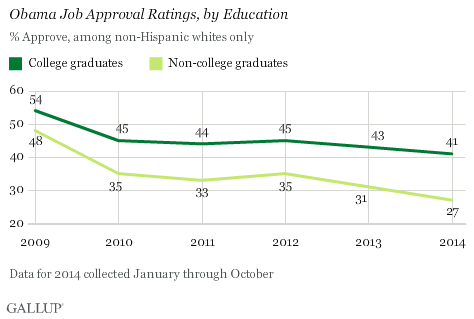 Perhaps most troubling of all for Obama: Gallup’s data only extended to the end of October, well before the recent racially-charged riots broke out in Ferguson, Missouri, and protests across the country.

“About two-thirds of adult whites have not graduated from college, making working-class whites a particularly important group politically because of its sheer size,” says Gallup. “At the moment, working-class whites exhibit weak support for the Democrats and their president, and it’s not clear how likely that is to change as time goes on.”

Among minorities, Obama remains popular. So far this year, Obama’s approval ratings are “84% among blacks, 64% among Asians, 53% among Hispanics,” reports Gallup.