Last Monday, the New York Times ran a lavish full-color image of a portrait of Pope Benedict XVI made out of condoms. If they thought twice about offending Roman Catholics’ religious sensibilities, they gave no public hint of doing so. And so my human rights organization, the American Freedom Defense Initiative (AFDI), decided to test their commitment to free speech by submitting an ad featuring a cartoon of Muhammad – the winning cartoon from our free speech event in Garland, Texas, which the Times had refused to run in their coverage of the jihad terror attack on our event. 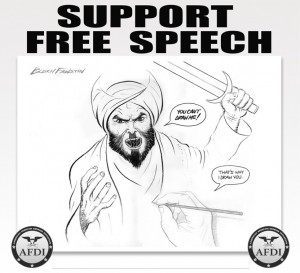 Predictably, it rejected our ad as well. AFDI submitted the ad, featuring Bosch Fawstin’s cartoon of Muhammad exclaiming, “You can’t draw me!” and the cartoonist answering, “That’s why I draw you,” with the caption “Support Free Speech,” to run on Sunday, July 5, at the staggering cost of over $40,000.

Our ad is not obscene or offensive in any objective sense. It is a statement about how free people are not going to submit to violent intimidation and allow bloodthirsty thugs to curtail our freedoms.

But for the Sharia-compliant New York Times, even that was too far over the line. The Times’ John Shaw wrote me: “I have checked with our advertising acceptability department and this ad does not comply with our acceptability standards because it is offensive on religious grounds. We thank you again, but we will not be able to accept the ad.”

Offensive on what religious grounds? Sharia. For years now, the New York Times has adhered to and enforced the strict code of Islamic law. Bowed and cowed, the Times will not violate the vicious and archaic blasphemy laws under the sharia: it will not criticize, mock or otherwise mock Islam, no matter how high the death toll or how gruesome the jihad.

Back in 2012, the New York Times ran a full-page ad calling for Christians to leave the Catholic Church. When AFDI submitted a mirror image of that same ad, making the exactly the same declaration concerning Islam, the ad was rejected out of hand. We used the same language as the anti-Catholic ad. The only difference was that ours was true and what we described about the mistreatment of women and non-Muslims under Islamic law was true. The anti-Catholic ad, by contrast, was written by fallacious feminazis. Nonetheless, in a craven capitulation to Sharia blasphemy laws, the Times rejected my ad.

Bob Christie, Senior Vice President of Corporate Communications for the New York Times, called me to advise me that they would be accepting my ad, but considering the situation on the ground in Afghanistan, now would not be a good time, as they did not want to enflame an already hot situation. Christie said that the Times would be reconsidering it for publication in “a few months.”

During our conversation, I asked Christie, “If you feared the Catholics were going to attack the New York Times building, would you have run that ad?”

Christie responded, “I’m not here to discuss the anti-Catholic ad.”

Christie then sent me a follow-up letter, claiming that the Times was going to “delay publication in light of recent events in Afghanistan, including the Quran burning and the alleged killings of Afghani [sic] civilians by a member of the U.S. military. It is our belief that fallout from running this ad now could put U.S. troops and/or civilians in the region in danger.”

The publication “delay” is, of course, still going on.

Not to be outdone, the Washington Post rejected the ad as well. Video here and here.

It was most disingenuous for the New York Times to refuse to run our counter-jihad ad based on their concern for U.S. troops in Afghanistan. Liars. The New York Times has done more to jeopardize the safety of our troops than any mainstream media outlet, with the possible exception of Newsweek. Was the Times concerned that they were putting our troops’ live in danger when they ran front page articles on Abu Ghraib every day for a month? Starting on May 1, 2004, the New York Times had a front page article on Abu Ghraib every day for 32 days.

Who leaked the NSA wiretaps under FISA, jeopardizing not just troops but American citizens, or the highly classified Pentagon order authorizing special ops to hunt for al-Qaida in the mountains of Pakistan?

The New York Times exposed SWIFT (which put military and civilians at great risk of jihad). SWIFT was a legal secret program that gave the government access to a massive database of international financial transactions, using “broad subpoenas to collect the financial records from an international system.” White House spokeswoman Dana Perino said in 2006, “The president is concerned that, once again, the New York Times has chosen to expose a classified program that is protecting the American people.”

Despite the obvious hypocrisy of the Times, the mainstream media fell into line. It took a couple of days to get their arms around how to frame the Times’ self-enforcing of Shariah, but the Huffington Post and the left lemmings soon began to follow the Times’ line, claiming that running my ad would endanger lives.

Really? What nerve. What is lower than using our brave men and women to cover for the Times’ cowardice and anti-freedom editorial policies? That is so … left.

And now, with their running the Pope condom “art” but refusing to run my free speech statement, their cowardice and hypocrisy are fully exposed.