New York Times bestselling author Roger Stone has a new book, The Clintons’ War on Women, and he spoke exclusively to Breitbart News about the revelations he is making about Bill and Hillary Clinton. 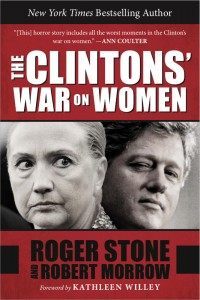 Stone coauthored the book with Robert Morrow, a political researcher and historian. Based on their research, the two show how Bill and Hillary left a trail of assault accusations, intimidation, and cover-ups against women and children.

The Clintons’ “systematically abuse women and others – sexually, physically, and psychologically – in their scramble for power and wealth,” says the book’s press release.

Hillary Clinton’s core agenda is a quest for power, even while she presents herself as champion of women’s issues, Stone says.

“If Hillary intends to build her campaign around an appeal to women, her campaign is built on quicksand,” said Stone. But “Hillary is a life-time abuser of women and her advocacy on women issues rings hollow,” he said.

The book includes details about Clinton’s alleged crimes in Arkansas, in the White House, during her term as Secretary of State, and at the Clinton Foundation, and concludes with revelations about Hillary’s current presidential campaign.

“She’s a life-long abuser of women. She denigrates, degrades and threatens those women who are unlucky enough to be the sexual assault victims of her husband, and that number, you know, is in the hundreds,” Stone said exclusively to Breitbart News.

He explained the book focuses on 14 individual cases in which Hillary hired private detectives who “threatened and silenced” Bill’s victims.

Stone also said she is not the champion for children she portrays herself to be either. “We present the evidence that it was Hillary Clinton …who gave the order at Waco that killed 26 innocent children,” Stone told Breitbart News, which he argues in his book. “Janet Reno was only Attorney General for two weeks at the time that the U.S. government assaulted the … compound in Waco,” he said.

“We produce congressional evidence from both the Senate and the House that it was Hillary who gave the order to proceed,” he declared. “Twenty-six innocent children died in that assault, which was completely unnecessary.”

“Hillary’s hypocrisy is stunning ” Stone stated. “The key to defeating Hillary is to prove who she really is to women voters.”

According to the breathless press release, Stone and Morrow make the following arguments throughout the book:

The book can be preordered on Amazon and will be available in book stores on October 13th.