The United States is host to 10 million more foreign-born people than all 27 countries comprising the European Union combined, according to a chart analysis of United Nations and European Commission data produced by Republican staffers with the Senate Subcommittee on Immigration and the National Interest. 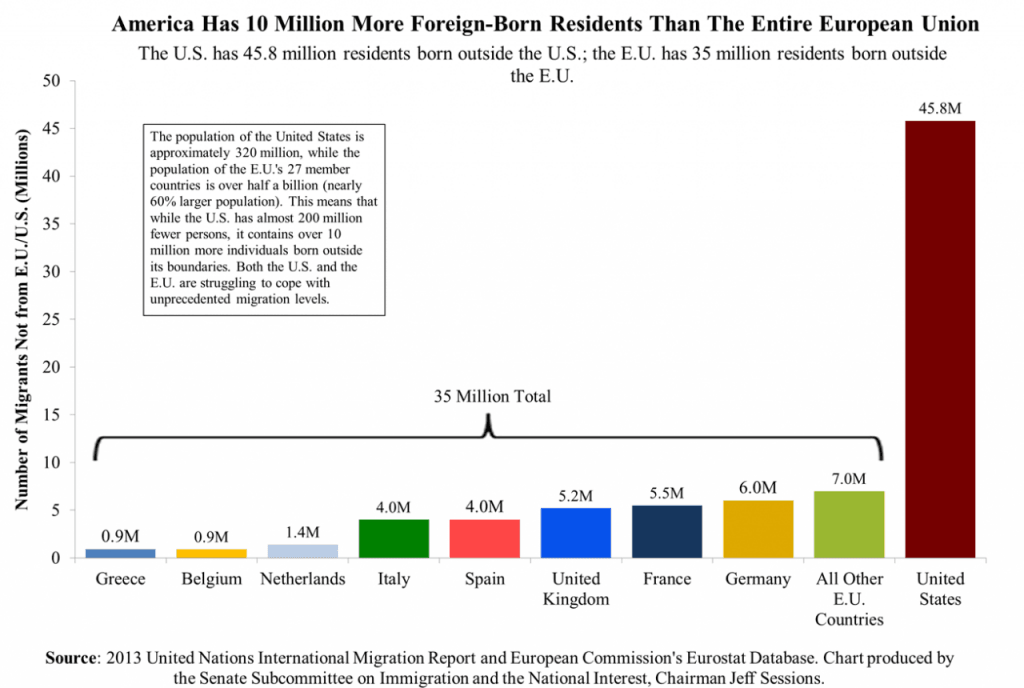 With the United States under international pressure to help alleviate the ongoing refugee crisis in Europe and the Middle East and both regions coping with large influxes of immigrants, the subcommittee analysis pointed out the disparate responses to the situation.

“Both the United States and the E.U. – particularly the wealthiest nations in the E.U. – are struggling with the economic and societal effects of unmitigated immigration,” the committee staff explains in its analysis. ”Yet, even though the United States has taken in nearly 11 million more migrants born outside its boundaries than the E.U. has taken in from outside its own, American politicians are pushing to increase immigration while many E.U. nations are pushing to reduce it.”

The subcommittee further highlighted that the most populous countries in the E.U. — Germany, UK, France, Spain, Italy, Netherlands, Belgium, Greece, Poland, and Romania which contain 415 million residents— are host to 28 million people born outside of the boundaries of the E.U. or nearly 20 million fewer foreign-born people than the U.S. Or in those the countries one in 15 were born outside the boundaries of the E.U. compared to one in seven in the U.S.

“To put that in context, in 1970 fewer than 1 in 21 U.S. residents was foreign-born. Assuming no law is passed to reduce the annual immigration rates, Census Bureau projects that the foreign-born population share in the United States will soon eclipse every prior record, and will continue rising to new all-time records every year to come– lowering wages for today’s workers, both immigrant and U.S.-born. This autopilot growth in the labor supply continues even as automation steadily reduces demand for workers,” the subcommittee argues.

In that same vein, the subcommittee points out that on top of the E.U. the U.S. takes in more foreign-born people than the E.U. and Latin America combined.

“As one further mathematical comparison: the total migrant population in all of Latin America is 7.75 million (many being regional migrants), meaning that the U.S. has admitted more people from outside its boundaries than 21 different Latin American countries put together and the E.U, combined,” the analysis reads.