A mob of black students at one of Canada’s liberal arts colleges has been caught on camera intimidating white administrators, including an Associate Vice-President, yelling, “You will give us the respect that we ask of you,” and presenting a list of segregationist demands. 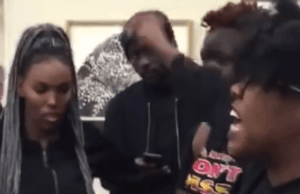 Brenda Whiteside, Associate Vice-President of Student Affairs at the University of Guelph, was trapped in her office by a gang of protesters who whooped and clicked their fingers as two of their number accused the college of being “rooted in anti-black racism.”

The footage, which appeared briefly on LiveLeak.com before being taken down, has not previously been published. It shows a large group of black students surrounding two white college administrators while their leaders jab their fingers and shout at Whiteside, demanding more black support and academic staff.

The University of Guelph’s Assistant Vice President for Human Rights and Equity, Jane Ngobia, is a black woman.

The Guelph video shows how odd the language of campus protest has become. “How many racialised [sic] students do we have?” asks one protester. “White students can go in and talk to a white counsellor. What about us?” The first adds: “Are you even around racialised people?”

Also disturbing are the plainly segregationist demands the students make. They appear to tell administrators they cannot be represented or “validated” by white staff and that only black staff can cater to their needs. “We’re not being acknowledged. And that’s fundamentally problematic,” says a boy who identifies himself as a campus athlete.

The athlete says he has, “Never left my campus and not thought [racial abuse] is gonna happen. And for me to just implicitly feel that’s comfortable is problematic.” The word “problematic” is echoed around the protesting students as a sort of mantra.

Another student agrees that she is “scared to go out.” The University of Guelph is one of Canada’s most liberal educational institutions. 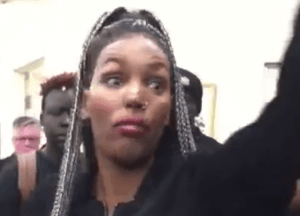 One of the leaders of the protest is seen objecting to the presence of police officers on campus, alluding to the number of black deaths she says have occurred at the hands of the police. She says to Whiteside: “As I walked in here, and I saw that police officer, Brenda I was disappointed… Why does he feel like he needs to come here? Why does he feel like he is invited here?”

Guelph’s black students do have a point about having their faces being used on posters by diversity-obsessed white college administrators. It’s easy to see why they might feel underappreciated once they arrive on campus and realise that the glorious multiculturalism of a university’s marketing materials doesn’t reflect the ethnic make-up of the school.

But they appear to have absorbed the worst excesses of batty liberal academic thinking, making statements such as: “Respect does not mean respect against black people. Look at intersectionality.” This echoes much of the rhetoric of the Black Lives Matter movement, which has been called reverse racism by commentators such as Breitbart’s Ben Shapiro.

One of the problems with this language is that it can slip too easily into allegations of outright racism. “The RAs are racist!” is one such exclamation made by a student in the video, along with: “This establishment is rooted in anti-black racism!” 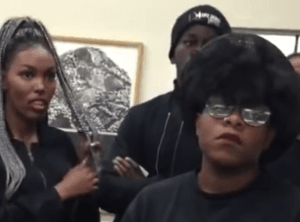 “Nothing is validated,” complain the students. “Our stories are not validated. We are tired of explaining racism to you all.”

Towards the end of the video, the students become increasingly agitated, with one student yelling at Whiteside, “Let me speak!” and another jabbing her finger and intoning, “You will give us the respect that we ask of you.”

One of the group ringleaders tells Whiteside: “I’m not talking about diversity. We’re here talking about black students, because when we talk about racism, black people are at the bottom of the totem pole. If you are serious about acknowledging these issues, contact me. If we do not hear from you, then we know you don’t care. Read our demands.”

She continues: “I urge you to go on Facebook because I’m pretty sure you haven’t, and check out the hashtag #BlackOnCampusGuelph.” Her fellow organiser nods and points in agreement.

“I don’t give a fuck about this school, to be honest,” she adds.