“REPUBLICAN leadership is composed of pandering LIARS stoking IRRATIONAL fear,” the front-page headline thundered. “Their answer to OBAMA’S measured PLAN to stop crazies from getting GUNS is simple DECEIT. All in a BLOOD-SOAKED chase for cheap votes.”

The NYDN then clumsily christened Republicans “THE PARTY OF PRO-DEATH,” illustrated with pictures of Carly Fiorina, Ted Cruz, Paul Ryan, and Marco Rubio, which seems like a rather eclectic choice of death-mongers. 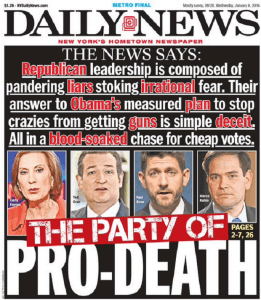 That’s an awful lot of hysteria to level at people who are making very reasonable objections to Obama executive orders that are either illegal, or a useless restatement of existing law.

Why, you’d almost think the supporters of a failed President are whipping up a frenzy over this nothingburger political stunt to distract the public from his long string of disasters! Hey, did anyone else just hear a loud noise coming from North Korea…?

Well, never mind that, Obama’s going to make sure that online gun sales are subject to background checks, exactly the way they already are, and you’re a genocidal maniac if you disagree.

Speaking of “pandering liars stoking irrational fear,” you’ll find few better examples than the Democrat campaign to smear NRA members and Republican politicians as not merely mistaken in their sincerely-held views, but actively “pro-death.” This is coming from the same people who thought it was out-of-bounds to videotape Planned Parenthood executives joking about buying sports cars with the proceeds from baby-organ harvesting.

It’s funny how all these “common-sense gun control measures” Democrats are constantly bleating about require absurd political theater and incessant lies to promote. If it’s all so common-sense, why did Obama have to straight-up lie to a national audience about how online gun sales work? You’d think common-sense measures could sell themselves without political hacks making up fairy tales, from Obama’s photo-op stunts to the stream of instantly debunked propaganda pouring out of gun-control groups. You would think such obviously necessary and totes Constitutional measures could be sold to the public through honest persuasion, including the difficult work of building Congressional support for proper legislation.

Instead, gun control is pushed entirely through intimidation, which is what Obama’s sad-clown circus on Tuesday was all about. It was an act of virtue-signaling – the new craze among collectivists in the Internet era.

The measures the President talked about imposing were of little measurable value, but he wanted to send signals that he CARES SO MUCH and is ready to FIGHT THE GUN LOBBY. He wants you to feel, not think. He doesn’t carefully build bipartisan support for what he wants; he takes it, breaking the law as necessary, and then dares his opponents to push back.

The point of the exercise was to provoke gun-rights defenders, and people who care about the Constitution, into responding… so Obama’s horde of low-information supporters could go berserk on them, as the New York Daily News did. The new favorite insult from the mouth-breather set is “ammosexual.” It must have been slung a million times on social media yesterday… by people who normally claim insults based on sexuality are such heinous hate crimes that the First Amendment should be suspended to shut them down.

Hate-swarming is the only thing that gets Obama Democrats excited in the sunset of his presidency. They can only dimly remember why they ever got worked up about him, but they’re always ready to lash out against people they despise, including Republicans, gun owners, and the NRA.

Of the measures Obama discussed, two of them were obvious failures he should be apologizing for – he’s only now discovering that law-enforcement agencies are understaffed, and mental health treatment needs more money, seven years into a Presidency that nearly doubled the national debt?

As for the business about re-defining who is “engaged in the business” of selling guns, Jonathan Adler at the Washington Post notes that it largely amounts to re-stating the identity of “those who are already subject to the relevant federal requirements and does not in any way expand the universe of those gun sellers who are required to obtain a license and perform background checks.”

It’s a quick fix, a political stunt designed to make it look like the mighty King Barack is “doing something about gun violence” and thumbing “powerful lobbies” in the eye, a bit of tinkering around the edges of the law that might intimidate a few marginal gun sales by making people who might find themselves suddenly reclassified as “gun dealers” a bit nervous.

None of that will affect terrorists, violent lunatics, or the gangsters who run the streets of Obama’s hometown in the slightest.  If the problem is as severe as gun-control zealots claim, shouldn’t they be angry that Obama is wasting political capital on meaningless measures, while the public loudly and clearly opposed to gun control?

Of course, the people who are actually a menace to society – people Obama and his Party are more likely to coddle, excuse, or ignore than denounce – aren’t interested in obeying any law, no matter how many sub-paragraphs the statists add. The old saying holds that you rob banks because that’s where the money is. Politicians dump endless volumes of micro-managing regulations on law-abiding people because that’s where the obedience is.

Well-meaning taxpayers with jobs, assets, and clean legal records are easy to push around. Gang-bangers and jihadis are not. That’s why the liberal response to the depredations of the latter is always a new bucket of regulations targeting the former.

One other thing about Obama’s approach to gun control: lately we’ve been subjected to numerous harangues about how vigorous criticism of Islamist terrorism will somehow push moderate Muslims into the arms of radicals. And yet, Obama’s gun-control crusade, so clearly contrary to the will of the American people and their Constitution, has turned him into history’s greatest gun salesman. Gun manufacturers are just about the only robust stocks on the market at the moment. Obama’s executive-action fiddling with the rules might end up squashing a few marginal gun sales, but outside the margins, the firearms business booms every time he shoots his mouth off.

If Democrats really believe in the idea that indiscriminate criticism pushes “moderates” into more “radical” action, shouldn’t they look at the explosion of gun sales following each of their attempts to whip up a media firestorm over guns, realize that their rhetoric is offending and frightening decent people into arming themselves, and conclude it’s better for their cause to shut up? They claim reducing the number of guns in private hands is a vital objective, but their actions consistently produce the opposite result.

They’ll never come to that conclusion, because it runs contrary to the sacred tenet of liberalism: only government action matters. Only new laws, executive orders, and government spending count as “doing something” about any problem. A light government touch is never the right answer. It’s always a binary choice between increased power and money for the State, or “doing nothing” – and when it comes to gun control, the increasingly frenzied and desperate Left thinks everyone in favor of “doing nothing” is an accessory to murder, indeed a worse monster than the killers actually pulling triggers on the streets of Democrat-run cities.

Obama’s executive-order stunt is a prayer to his Church of the State, whose followers worship intentions, rage against due process, and blissfully ignore results.