TEL AVIV – An American tourist was killed and at least ten others wounded, four seriously, in terrorist stabbing attacks perpetrated by the same individual at two locations in Jaffa, the port city located just south of Tel Aviv.

The attacks took place as U.S. President Joe Biden was in Jaffa, speaking at the Peres Center for Peace, Breitbart Jerusalem has confirmed.

The Peres Center is located about half a mile from the section of Jaffa’s port that was the scene of the attack. Jaffa is part of the Tel Aviv municipality.

Sources in the Israeli security establishment told Breitbart Jerusalem that immediately after the attack, massive police reinforcements were called in to help secure the ongoing event at the Peres Peace Center, which was already tightly secured.

The sources said there is no immediate information to indicate that the stabber timed his attack to coincide with Biden’s visit to Jaffa.

The Jaffa stabbing was just one of three attacks that took place within about two hours of each other. One Israeli was moderately wounded in a terrorist stabbing attack in Petah Tikva, located about nine miles south of Tel Aviv. Before that, two Israelis were wounded in a shooting attack near Jerusalem’s Damascus Gate, one of the main entrances to the Old City.

Ali Waked, a staff reporter at Breitbart Jerusalem, rushed to the scene of the Jaffa attack moments after the stabbings and took the following exclusive photos: 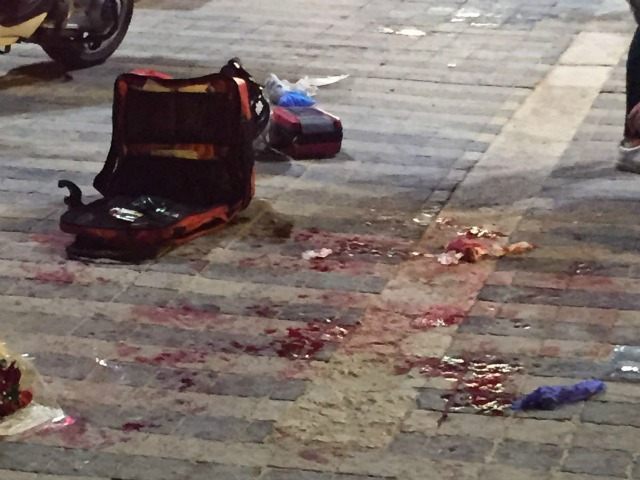 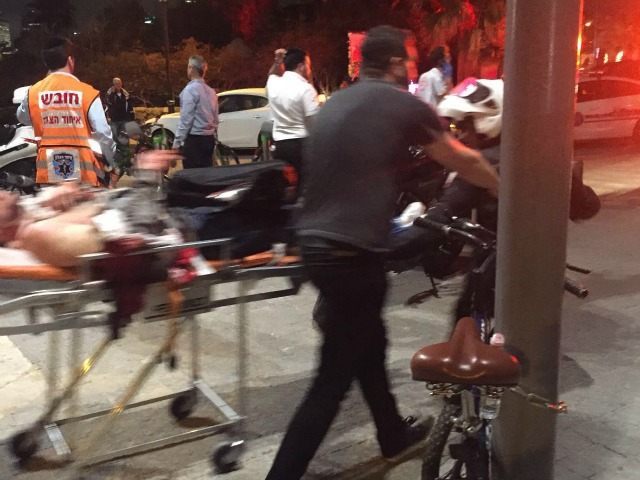 Emergency services were quickly on the scene (ALI WAKED/Breitbart Jerusalem) 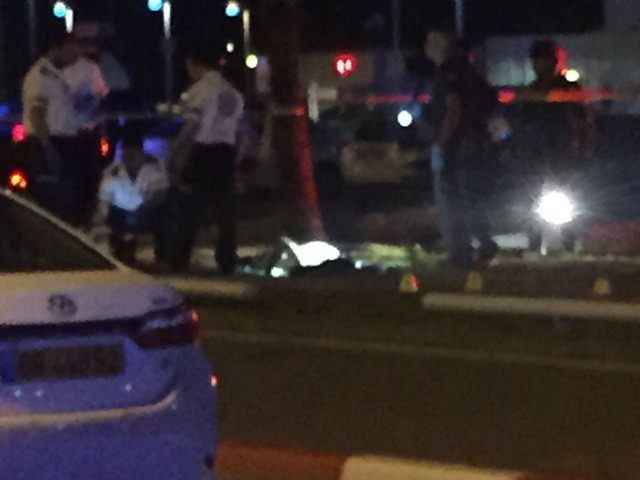 Waked reports that the streets of Jaffa near the Peres Peace Center have become like a closed military zone.

According to numerous Israeli media reports, the terrorist stabbed three people at the Jaffa port and then ran north – the opposite direction from the Peres Peace Center. He continued his murderous spree, stabbing four more people near the Manta Ray Restaurant, which is located on the beach at the juncture between Jaffa and Tel Aviv.

The terrorist ran from the scene of the second attack and was eliminated by police forces arriving at the scene. Police spokesman Mickey Rosenfeld told reporters the terrorist opened fired on the police officers, wounding two of them.

Ynetnews reported the civilian killed in the Jaffa attack was a 29-year-old U.S. tourist.  The American victim’s wife was also gravely injured, according to reports.

Ynet quoted Yosef, an eyewitness, who said he tried to hit the terrorist with an aluminium rod. “The terrorist, who was young and wearing a hoodie, came from the Jaffa Port area,” Yosef told the news website. “Once he was on the boardwalk, he attacked a tourist couple. The woman was stabbed several times, tried to flee, and fell. The terrorist then continued to stab the man, and stabbed him in the leg. I was in my car. I ran to him, took the aluminum rod, and hit the terrorist in the back. He tried to stab me, then he ran.”

A second eyewitness told Ynetnews a second tourist was attacked:  “I was in my office and I heard screams. I saw a young man wearing a hoodie who was attacking a woman. She was a tourist. There were screams and then a man carrying an aluminium rod ran towards them. The terrorist got scared and ran north. The man with the aluminium rod stopped, and together we started administering first aid to the tourist. I called Magen David Adom and they told me to press down on her wounds.” The second tourist was likely the wife of the 29-year old who was killed.

The Palestinian media identified the attacker as a 22-year-old from the Palestinian village of Qalandiya in the northern West Bank.