An associate producer for NBCUniversal, Inc. declared that the illegal alien “hoping to assassinate Donald Trump is a good guy with a gun” on Twitter Tuesday.

“It could be argued that the dude who was hoping to assassinate Donald Trump is a good guy with a gun,” he tweeted from Los Angeles at 11:21 P.M. Tuesday. 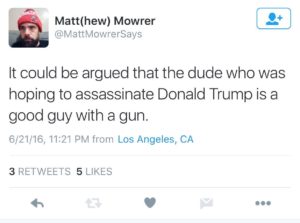 Matthew Mowrer — whose account is now private — was alluding to the illegal alien from the United Kingdom who told authorities he tried to grab a cop’s gun to shoot Trump at a Las Vegas rally.

Michael Steven Sanford, 19, had overstayed his visa and was living out of his car, according to his court-appointed attorney. He was arrested after grabbing an officer’s gun and trying to pull it from its holster. He told investigators he was convinced he would die while trying to kill Trump. Sanford also told authorities he went to Battlefield Vegas shooting range to practice firing a weapon, shooting 20 rounds from a 9mm Glock pistol, which a range employee confirmed.

Leftists have rioted during Trump rallies and viciously attacked Trump supporters, even women, and this is not the first time someone has tried to harm Trump at a rally. Rioters have also called for violence at Trump rallies because American Trump supporters are “heartless racists” whose political beliefs make them fair game for physical assault.

NBC did not respond to a request for comment on whether or not Mowrer will experience any consequences for praising an assassination attempt on a presidential candidate.

The hysteria surrounding the Trump campaign are creating a dangerous atmosphere, as Breitbart News has reported:

The Left and the establishment right have jointly and incessantly smeared Trump as a racist, sexist, Islamaphobic, demagogue, Hitler, subconsciously Hitler, not Hitler but Mussolini, and that his working class white supporters along with their communities “deserve to die.” Creator of Dilbert and neutral observer of the 2016 presidential race Scott Adams warned that the Hillary Clinton campaign was signaling it’s “morally justifiable to assassinate” Trump.

Violent threats celebrated by the media have been directed at Trump and his supporters in recent months, and Trump is repeatedly called a “fascist” by the same media that simpers over Obama’s every move.

Dara Lind wrote at Vox “Donald Trump poses a categorical threat to established norms of American democracy, governance, and society,” and it should be understood that “people who feel Trump’s rise puts their lives in danger” will attack his supporters. Likewise, Huffington Post contributor Jesse Benn wrote that there’s an “inherent value” in Mexicans and Democrats chasing down and beating up Trump supporters.