President Donald Trump has slid back from his campaign promises to curb the annual legal immigration of roughly 1 million foreigners.

In an interview with pro-globalist Economist magazine, Trump was asked: “Do you want to curb legal immigration?” Trump responded by saying he prefers merit-based immigration of skilled people. The interviewer pressed him again on the scale of legal immigration, asking “[are you] not looking to reduce the numbers?”

“No, no, no, no, we want people coming in legally. No, very strongly,” Trump replied, as two of his economic advisors sat beside him — top economic staffer Gary Cohn, and Steve Mnuchin, the Secretary of the Treasury.

Trump also backed proposals to keep importing temporary contract workers for the agricultural sector, even though the cheap labor will retard farmers’ emerging interest in buying new machinery, such as robot apple-pickers and robot cow-milkers. Trump told the Economist:

We also want farm workers to be able to come in. You know, we’re going to have work visas for the farm workers. If you look, you know we have a lot of people coming through the border, they’re great people and they work on the farms and then they go back home. We like those people a lot and we want them to continue to come in.

Immigration reform advocates are not surprised at Trump’s back-sliding, but they are confident that Trump’s dependence on his blue-collar base in the 2020 election is pressuring him to stick with his campaign promises, amid constant elite pressure for more legal immigration.

“The president was unambiguous in his [2016] campaign … one of the things he said was that he would support reductions in immigration,” said Ira Mehlman, communications director at the Federation for American Immigration Reform. “If he is backing off, we will fight to remind him that he did make this commitment during the campaign and we intended to hold him to it,” he told Breitbart.

“Anyone following Trump’s primary campaign could have predicted this – he repeatedly justified guestworker visas of various kinds and stressed the ‘big beautiful door’ that would be built into his wall,” wrote Mark Krikorian, the director of the Center for Immigration Studies. “Both the anti-borders crowd and some starry-eyed immigration hawks mistook Trump’s commitment to enforcement (which seems genuine) to mean he was also skeptical of the overall level of immigration,” he said, adding that the next generation of populist GOP leaders — such as Sen. Tom Cotton — understands the many harms caused by mass immigration.

But Trump’s backsliding isn’t a done deal. Former President Barack Obama also backed off many of his promises, even while he was urging his supporters to publiccly protest his actions and to push back the lobbies that were blocking his agenda. Obama also adopted a gradualist stop-and-go political strategy which helped the GOP establishment ignore his gradual progress towards his big-government goals, and he achieved many goals for his supporters via little-noticed court decisions and agency regulations by allied appointees.

With constant pressure by Trump’s supporters, Trump will be more willing and better able to ignore or overcome establishment opposition and gradually get his agenda implemented stage-by-stage.

The influx of foreign workers holds down salaries, keeps unemployment high, and makes it difficult for poor and working class Americans – including immigrants themselves and their children – to earn a middle class wage … Every year, we voluntarily admit another [1] million new immigrants, [plus 1 million] guest workers, refugees, and dependents, growing our existing all-time historic record population of 42 million immigrants. We need to control the admission of new low-earning workers in order to: help wages grow, get teenagers back to work, aid minorities’ rise into the middle class, help schools and communities falling behind, and to ensure our immigrant members of the national family become part of the American dream.

Requirement to hire American workers first. Too many [contract worker] visas, like the H-1B, have no such requirement. In the year 2015, with 92 million Americans outside the workforce and incomes collapsing, we need companies to hire from the domestic pool of unemployed. Petitions for workers should be mailed to the unemployment office, not USCIS….

Immigration moderation. Before any new green cards are issued to foreign workers abroad, there will be a pause where employers will have to hire from the domestic pool of unemployed immigrant and native workers. This will help reverse women’s plummeting workplace participation rate, grow wages, and allow record immigration levels to subside to more moderate historical averages.

Trump repeated those commitments in many subsequent speeches. For example, in March 2016, Trump called for a two-year pause in legal immigration, saying “I think for a period of a year to two years we have to look back and we have to see, just to answer the second part of your question, where we are, where we stand, what’s going on …  I’d say a minimum of one year, maybe two years.”

In his January 2017 inauguration speech, he described the theme of his administration as “Buy American, Hire American.”

Some polls show that promise is extremely popular. For example, a November 2016 poll by Ipsos showed that only 12 percent of respondents strongly opposed plans to “change the legal immigration system to limit legal immigration.” Four times as many, or 57 percent, back reductions in legal immigration, while 13 percent did not take a position.

To a large extent, Trump has followed through on those promises. He has revived enforcement of immigration law, slashed the inflow of illegal immigrants, and he is pushing a popular merit-based reform that would likely reduce the inflow of unskilled legal immigrants. Trump’s merit-based reform is also backed by some GOP legislators who want to increase Americans’ productivity, not just the number of American consumers.

But Trump is under constant pressure from business leaders — including some of his advisors — who have a huge incentive to boost legal immigration, no matter the cost to ordinary Americans.

In strictly economic terms, legal immigration is far more important than over-the-border illegal immigration, because it is far larger and has far greater impact on employees, companies, and investors, wages, housing prices, profits and stock prices. In fact, multiple economists — including economists at Goldman Sachs — say government should try to boost the size of the economy by importing more consumers and workers.

Federal immigration policy adds roughly 1 million legal people, workers, consumers and renters per year to the economy. This annual inflow is further expanded by the immigrants’ children, which now combine to create a population of roughly 63 million consumers and workers –not counting roughly 21 million illegals and their U.S. children.

That means roughly one-quarter of the nation’s consumers have been imported into the 330 million-strong economy via legal or illegal immigration.

This legal inflow includes some very skilled workers and some people who become very successful entrepreneurs, but it also dumps a lot of unskilled workers into the country just as a new generation of technology is expected to eliminate many types of jobs. It also annually shifts $500 billion from employees to employers and Wall Street, and it forces state and local government to provide $60 billion in taxes to businesses via routine aid for immigrants, and it pushes millions of marginal U.S. workers out of the labor force and into poverty, crime and opioid addiction. 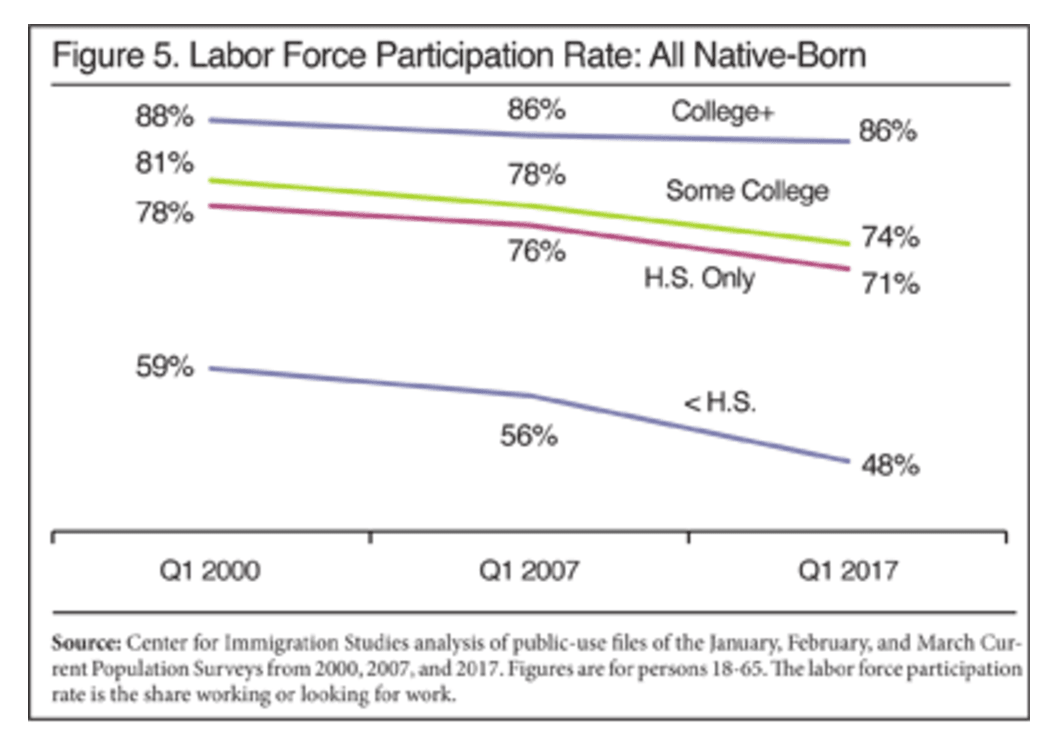 High immigration also reduces employers’ need to recruit disengaged Americans, to build new facilities in high-unemployment areas, or to buy productivity-boosting machinery or to demand that local schools rebuild high school vocational training departments for the millions of youth who don’t gain much from four-year colleges.

Under Obama, the annual inflow of legal immigrants was roughly twice the inflow of illegals. Roughly 550,000 illegals arrived in 2016, but fewer are expected in 2017, according to the Center for Immigration Studies.

Whenever the inflow of extra immigrant customers is threatened by public opposition, business groups say their companies and investors will be damaged.

For example, in July 2016, a Wall Street firm tried to help Hillary Clinton by declaring that Trump’s opposition to illegal immigration would hurt companies and investors by forcing them to pay higher wages, and by reducing the cost of housing.

“As the immigrants leave, the already tight labor market will get tighter, pushing up labor costs as employers struggle to fill the open job positions,” the report declared. “Mr. Trump’s immigration policies will thus result in … potentially severe labor shortages, and higher labor costs,” the critical report promised. The formal unemployment rate would immediately drop by a third, from 5 percent in 2016 to 3.5 percent in 2017, the report predicts. Housing prices would drop by almost 4 percent in 2018 and 2019, says the Moody’s report, which did not admit that higher wages and lower housing prices are popular throughout America.

“Reduced immigration would result in slower labor force growth and therefore slower growth in potential GDP,” or annual economic activity, according to a 2017 report by Goldman Sachs.

Similarly, Jamie Dimon, the chairman and CEO of JPMorgan Chase, recently called for an amnesty for illegals and a potentially huge increase in white-collar immigration to help stimulate the economy. “I hope eventually we have proper immigration. Good people who have paid their taxes and haven’t broken the law, get them into citizenship at the back of the line … [and] if people get educated here, and they’re foreign nationals, get them a green card,” he said.

In the same interview, Dimon portrayed himself as concerned about the economic condition of ordinary Americans, saying:

Middle-class wages haven’t gone up. One is, lower-class wages haven’t gone up enough to create a living wage. One is, people losing jobs, more to automation than anything else. … There’s some more terrible numbers — men, age 25 to 55, the labor-force participation rate is down 10%. That’s unbelievable. There are 35,000 dying of opioids every year. Seventy percent of kids age 17 to 24 can’t get into the US military because of health or education. Obesity, diabetes, reading and writing. Is that the society we wanted? No. We should be working on these things, acknowledge the flaws we have, and come up with solutions. Not Democrat. Not Republican. Not knee-jerk.

But the 2016 election showed that Trump and centrist Americans recognize that higher immigration means reduced wages, more unemployment, more drug addition, higher housing prices and longer commutes. That is how Trump won the 2016 election in Wisconsin, Michigan, and Pennsylvania, and why his on-again, off-again, pro-American immigration policy is at the core of his impending 2020 race.