Update: As expected, First Lady Melania Trump changed into sneakers on Air Force One after she boarded the plane wearing heels. 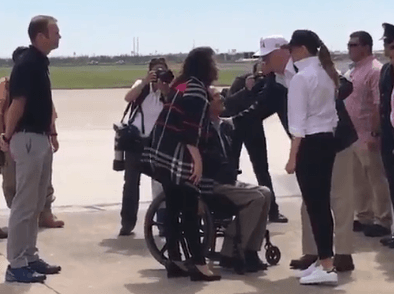 The First Lady arrived with President Donald Trump at Corpus Christi International Airport where they met with Governor Greg Abbot and his wife Cecilia as well as FEMA administrator Brock Long.

She also wore a new hat, which read “FLOTUS.”

Critics sneered at First Lady Melania Trump’s fashion choice as she left the White House with her husband President Donald Trump to visit Texas in the wake of Hurricane Harvey.

The first lady wore black capris, heels, and an army green jacket as well as sunglasses as she boarded Marine One.

That triggered a series of critical comments from journalists, bloggers, and celebrities on Twitter, suggesting the First Lady was out of touch for wearing heels on her way to Texas.

But some noted that Melania Trump would likely change her shoes aboard the plane.

Others were not pleased:

I know this sounds so petty, but I really was wondering if she was gonna try to go to TX in heels…

High heels to a flood? https://t.co/Pscv4HwuMS

"The higher the heels, the further from the poors." pic.twitter.com/O1jSGBeiEm

She does know she's going to a natural disaster, right? Not sure 4 inch heels is the most appropriate footwear.

Great heels for the occasion, I'm sure. Sure to heal. https://t.co/Glw0kStQr9

Someone might want to tell Melania that her heels will have to be a little higher for this flood. https://t.co/KrZ00qbw94

Well if @FLOTUS toes get wet in the floodwaters at least her heels should remain dry #sensiblefootwear pic.twitter.com/MGO38XAwwS

(Melania wobbles into shelter in 6-inch heels)
"I here help. I bring you perfumes and chocolates." https://t.co/t8G4MP8zei

I know I wear heels in a hurricane zone. https://t.co/sHAsMicaEb

Such bravery. And who among us doesn't wear stiletto heels to a hurricane zone? https://t.co/WQe6grkA8f

As a new reporter in late '70s, I learned never never wear heels to outside assignment like flood. Good luck with those spikes @FLOTUS. https://t.co/uaIo6rUM4D

Nothing says 'we don't plan on staying long' like going to a flood wearing high heels and suede shoes. pic.twitter.com/ByucWbxxXx

Lot of people noticing the heels, but have you considered how high the floodwaters in Texas are? #beprepared #thisisgoingtogogreat https://t.co/VLVIC7bxwQ

I'm guessing Melania is changing into boots on the plane, the heels aren't going to do well in 28 inches of flood water. https://t.co/6yTqPqnWxh

Update: A spokesperson for the First Lady responded to the criticism in a statement:

“It’s sad that we have an active and ongoing natural disaster in Texas, and people are worried about her shoes,” the statement read.