About half the foreign born population, which has boomed to nearly 44 million, lives in urban counties across the United States where white Americans are now in the minority.

The latest data released by Pew Research Center reveals how the booming foreign-born population has largely situated itself in urban counties in the U.S. Foreign born residents have also steadily increased their share in suburbs, while they remain a small fraction of the population in rural America. 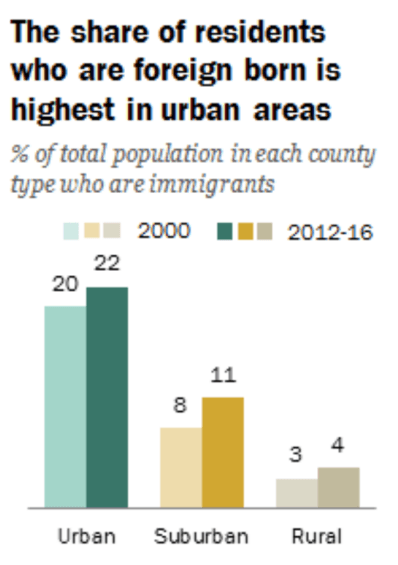 At the same time, urban counties across the U.S. have become increasingly more ethnically diverse. Today, white Americans are a minority in urban counties, making up only 44 percent of the total urban population.

The Hispanic population has grown tremendously, now far outpacing the black American population in urban America, making up about 27 percent of urban districts. 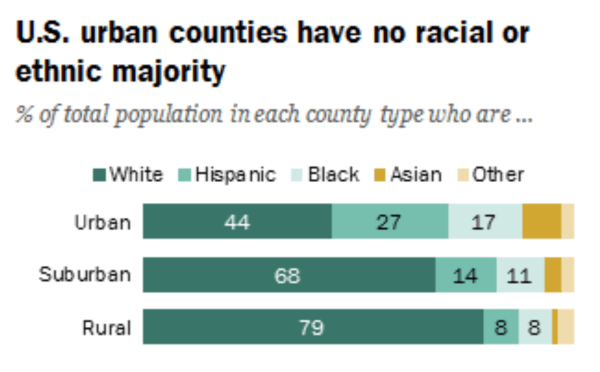 Through mass legal immigration, the makeup of the U.S. population has not only boomed to historic highs but also rapidly changed the demographics of the nation. As Breitbart News has reported, the U.S. has imported more than ten million legal immigrants in the last decade.

Currently, the U.S. admits more than 1.5 million legal and illegal immigrants every year, with more than 70 percent coming to the country through the process known as “chain migration,” whereby newly naturalized citizens can bring an unlimited number of foreign relatives to the U.S. In the next 20 years, the current U.S. legal immigration system is on track to import roughly 15 million new foreign born voters. Between seven and eight million of those foreign born voters will arrive in the U.S. through chain migration.