For Fiscal Year 2020, Trump will continue cutting refugee admissions by reducing former President Obama’s refugee inflow by at least 80 percent. This reduction would mean a maximum of 18,000 refugees can be resettled in the U.S. between October 1, 2019 and September 30, 2020. This is merely a numerical limit and not a goal federal officials are supposed to reach.

Coupled with the refugee reduction, Trump signed an executive order that gives localities, counties, and states veto power over whether or not they want to resettle refugees in their communities.

Burleigh County joins liberal Los Angeles County — a district that voted 72 percent for Clinton over Trump in 2016 — in their voluntary vote to keep resettling refugees in the area.

Despite Los Angeles’s homeless population approaching 60,000 people — a population almost as large as the entire city of Portland, Maine — county officials voted last week to import refugees and declare themselves a “Welcoming City” for foreign nationals. 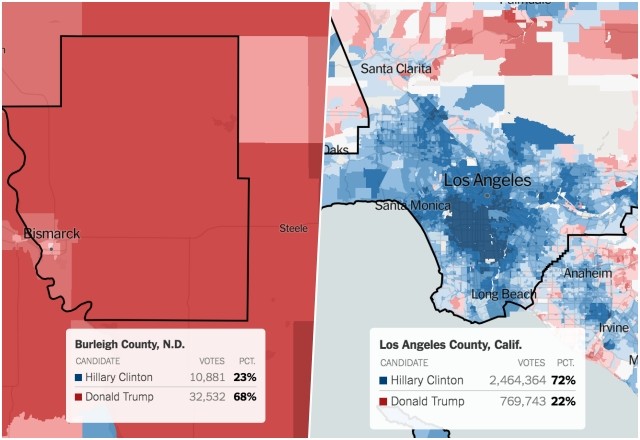 During a meeting on Monday evening, Bismarck, North Dakota officials asked that the Burleigh County Commission end refugee resettlement in the region so as to preserve scarce public funds for issues like homelessness, drug addiction, and racial inequality.

State Rep. Rick Becker told the Commission, according to Inforum:

As elected officials, you’re tasked with one thing only and that is to provide services to the residents of this county in a manner which most wisely spends the taxpayers’ dollars. You need to stand up and say, ‘We’re going to have answers, and when we have those answers, only then will we have the ability to make an informed decision.’

Bismarck Mayor Steve Bakken said his community must focus first on North Dakotans before they can help foreign nationals:

When you look at the finances that go into play, who’s first at the well? We’re extremely welcoming, but when you don’t have a situation financially to support what you currently have in needs — and now you’re going to throw a bunch of needs on top of that — show me the numbers.

Refugee resettlement costs American taxpayers nearly $9 billion every five years, according to the latest research. Over the course of five years, an estimated 16 percent of all refugees admitted will need housing assistance paid for by taxpayers.