A sheriff in California has made it clear he will not be enforcing the federal vaccine mandate on his employees at the Riverside County Sheriff’s Office.

In a September 13 press release, Sheriff Chad Bianco focused on sweeping vaccine mandates implemented by the Biden administration on September 9. The press release referenced a podcast the sheriff’s office had recently produced that calls into question the federal government’s authority to mandate a vaccine.

“Over the past couple of weeks, the idea of forced vaccination has caused much concern across the entire country. There is absolutely nothing in my podcast that was incorrect or irresponsible,” the release read. “It is factual and common sense based. To repeat the context of the podcast, I will not enforce the vaccine mandate on Sheriff’s Department employees.”

“In November of 2018 the residents of Riverside county elected me as their Sheriff. I stood before God and swore an oath to the Constitution of the United States, and the Constitution of the State of California,” the sheriff continued.  “It is my responsibility to protect the public from the criminal element, as well as being the last line of defense from tyrannical government overreach. The government has no ability and no authority to mandate your health choices. As your Sheriff I have an obligation to guard your liberty and freedom.” 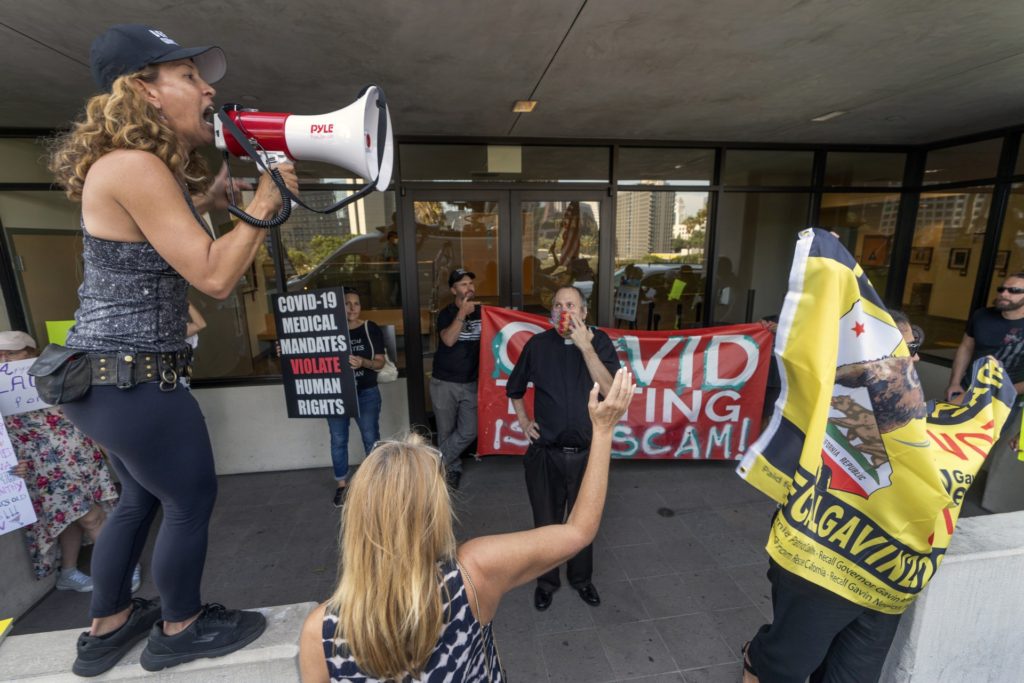 Anti-vaccine mandate protesters and supporters of the California recall election rally outside the front doors of the Los Angeles Unified School District, LAUSD headquarters in Los Angeles Thursday Sept. 9, 2021. The Los Angeles board of education voted Thursday to require students 12 and older to be vaccinated against the coronavirus to attend in-person classes in the nation’s second-largest school district. (AP Photo/Damian Dovarganes)

The sheriff ended the release by writing, “It is time our government and our politicians come to the realization that the only reason they exist is that “we the people” formed our government to secure the blessings of individual liberty and freedom.”

Bianco previously addressed Biden’s vaccine mandate on the Riverside County Sheriff’s Department podcast, the RSO Roundup, on September 9. “As far as I am concerned I will not mandate a vaccine for our employees. We will not make it mandatory for any new employee to be vaccinated or our current ones. I believe that that’s a very very personal choice, that you need to make the decision,” he explained.

The sheriff went on to highlight the federal government’s rhetoric at the beginning of the pandemic when the primary goal was to “flatten the curve”:

You can’t get over the fact that they initially said two weeks. Our entire mission was flatten the curve. Two weeks to flatten the curve, then it went to month, then it when to two months, four months, six months, then it went to the curve is flat, but we’re still going to have all these things in place, and then the vaccine came out and now we’ve learned that the vaccine may not be as effective as what you think it is.

Bianco pointed out that the mandate ignores those that have earned natural immunity. “They want to mandate a vaccine, but they don’t care that you’ve already had it and gotten over it, and then they’re going to mandate and say you need a booster because it’s going away so fast now, but our own immune system is not going away,” he explained.