Sen. Mike Braun (R-IN) told Breitbart News in an exclusive interview Wednesday the “shaky foundation” of the infrastructure negotiations could lead to a collapse of President Joe Biden’s legislative agenda.

Braun spoke to Breitbart News as congressional Democrats and Biden continue to search for a path to pass their $1.2 trillion infrastructure bill, otherwise known as the Infrastructure Investment and Jobs Act. House Speaker Nancy Pelosi (D-CA) scheduled the vote for Thursday, but it remains questionable if Democrats can pass the bill, given the infighting between moderate and progressive Democrats on the bill.

The Hoosier conservative said Biden built the strategy of passing duel infrastructure bills on a “shaky foundation,” which has led to the current disarray Democrats face ahead of Thursday’s pivotal vote on the so-called bipartisan infrastructure bill. 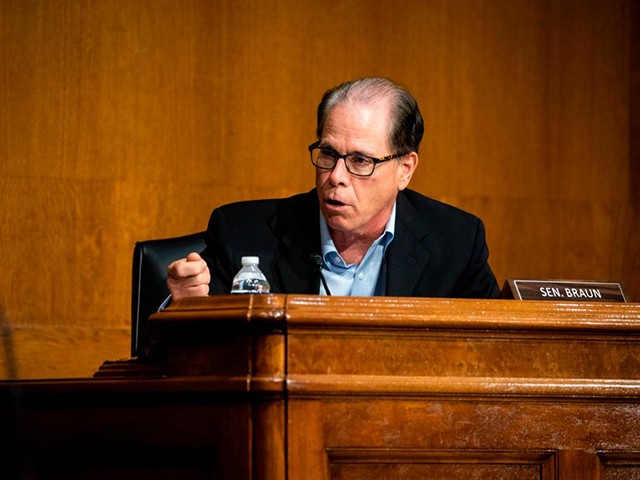 Senator Mike Braun, a Republican from Indiana, speaks during a hearing titled “Oversight of the Environmental Protection Agency” in the Dirksen Senate Office Building on May 20, 2020 in Washington, DC. (Photo by AL DRAGO/POOL/AFP via Getty Images)

“Biden has built his presidency on delivering this so-called Build Back Better [agenda], but to me, it was misguided from the beginning because it started to wobble when you’re throwing 6 trillion of additional spending on top of the normal four and a half trillion,” Braun told Breitbart News.

“It had a shaky foundation,” he added.

Heritage Action for America executive director Jessica Anderson told Breitbart News exclusively this week that they have urged Republicans against voting for the bipartisan infrastructure, as its passage would only enable the $3.5 trillion infrastructure bill.