A majority of New Mexico voters want a new governor to replace Democrat Gov. Michelle Lujan Grisham in her race for reelection this year, according to a recent internal polling memo. 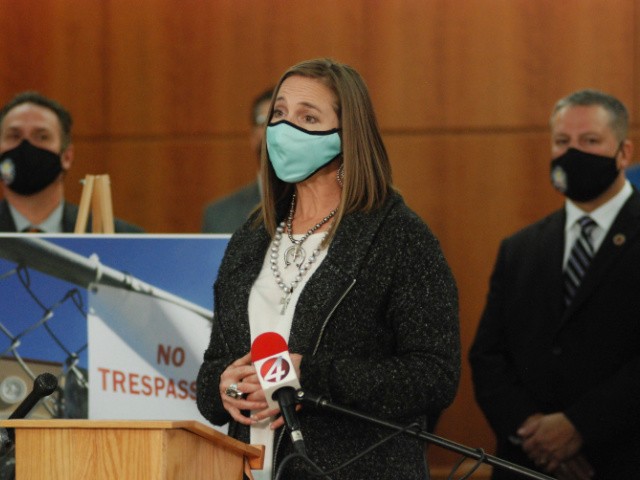 Zanetti, however, makes close to an eight-point swing and leads Grisham by three percent when respondents are presented with background information about the Republican candidates, including information that Ronchetti is an “anti-Trumper” whose “only relevant work experience is as a weatherman” and that Dow comes with the baggage of a civil lawsuit settlement, which occurred in 2017 after an employee of Dow’s at a Boys and Girls Club was jailed for two counts of sexual contact with a minor.

Presented with those details, Grisham leads Ronchetti by five percent and Dow by 12 percent.

The poll suggests Grisham, a one-term governor and former U.S. representative, is vulnerable in her bid for a second term in office. In addition to the poll revealing tight races in a state that generally leans slightly blue, a net positive five percent of respondents said they believe New Mexico is headed down the “wrong track.”

Zanetti, the candidate who released the polling memo, is a West Point graduate who served on Joint Task Force Guantanamo in 2008 and now works as a financial adviser. The New Mexico Republican said in a statement that the poll echoes what he has “been hearing throughout the state on the campaign trail.”

“New Mexicans feel the state is headed in the wrong direction and they are ready for a new governor,” Zanetti said. “Voters rolled the dice in the 2018 gubernatorial race and elected someone not ready to serve. Look where that has gotten us. The message is clear, New Mexicans are ready for a candidate with real executive experience who can come in on day-one and make their lives better.”

The poll was conducted by automated calling, text messaging, and online panels January 2–3 and has a margin of error of +/- 4.2 percent.