Edwards, a self-described “businessman, turned public servant,” told host Alex Marlow that he ran for Congress after serving six years in North Carolina’s Senate “to give back to the people of the mountains that have been so gracious to me and my family.”

Edwards elaborated more on his service in the state Senate and highlighted the state legislature’s economic growth record.

“First of all, we have brought notoriety to North Carolina because we are such a business friendly state,” Edwards said. “We’re rated by Forbes magazine, as the business the most friendly state for business in the entire country. And we’ve done that by reducing regulation and lowering taxes.”

“What we say in front of a television and what we say in front of a microphone has very little meaning. What really matters are the bills that we put forward and the votes that we take on the House floor,” Edwards added. “Those are the actionable pieces of serving in Congress that those are the types of actionable pieces that we’re judged by when I served in the Senate. Just just getting things done. Rhetoric accomplishes nothing.”

Marlow asked Edwards to list the top four issues he would focus on in Washington. He responded border security, energy independence, balancing the federal budget, and focusing on parental rights in education.

On China, Edwards “absolutely” sees the country as a geopolitical threat to the United States.

“President Trump was able to keep China at bay, so to speak. President Biden has no respect even from his own people here in the United States, let alone in the world. So yeah, China’s a threat in so many different ways,” Edwards said.

On education reform, Edwards called for abolishing the U.S. Department of Education because the “federal government has no business meddling in how we educate our children.”

He also believes federal funding for state school systems needs to be reformed.

“We need to put more power back in the hands, all the power, back in the hands of the states. And then the federal funding for education needs to be sent back to the States with no strings attached,” he said.

Marlow then asked Edwards to respond to accusations that he is the “establishment candidate.

Edwards went on to praise former President Donald Trump, saying, “we would be in so much better shape today, if President Trump were still our president.”

“The things that are driving inflation right now are energy costs, which really comes down to supply and demand, President Biden put in place policies that restrict in energy production,” he said. “The second thing is labor, it needs to be easier for people to go to work, instead of not working. The lack of workforce right now is driving up labor.” 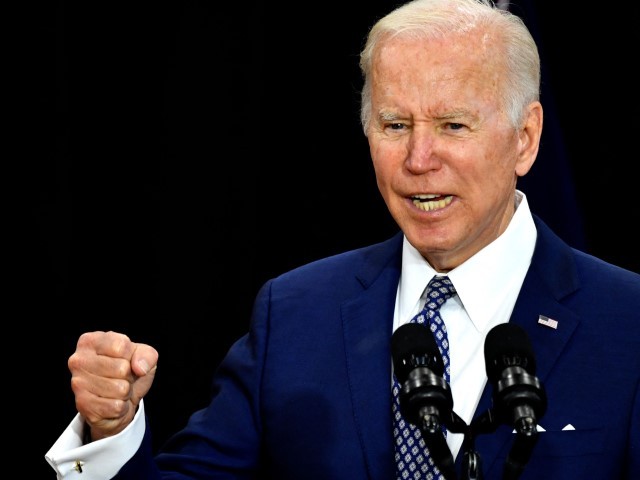 U.S. President Joe Biden delivers remarks after visiting a memorial near a Tops grocery store in Buffalo, New York, on May 17, 2022. (NICHOLAS KAMM/AFP via Getty Images)

“And then the exorbitant amount of money that has been dumped into the U.S. economy through taxpayer dollars is creating an artificial economy right now that is, is is driving inflation. And then we have to look to the debt, the interest on on our debt, and the tax burden on Americans is affecting it,” said Edwards.

“And it is so unfortunate that we live in a society, what was once the greatest nation on Earth, and and we’re struggling to feed our babies,” Edwards said. “I think that makes such a statement about the economic policy under the Biden administration and just just how detrimental it is to society.”

Edwards was asked to define “mountain values,” which was a key theme throughout his primary campaign.

“There are really four, four key points to me, when I have water cooler conversations with folks on what mountain values are. First of all, we are strong believers in God,” Edwards said. “Secondly, we we love our country and respect those that protect it both in the military and with law enforcement. Nothing is free, we work for what we get. And the fourth thing is we look out for our neighbors.”

In conclusion, Edwards called out the media for promoting far-left Democrats like Rep. Alexandria Ocasio-Cortez (D-NY) instead of focusing on the views of “mainstream Americans.”

“I think we’ve got to get back down to mainstream Americans. I don’t know that anybody out there right now is happy with the way things are going,” he said. “I believe there’s going to be a common interest in attacking Biden inflation and the artificial economy that that we’ve got right now.”