This week starts the NFL’s 100th season, but some teams seem to still be finding a awful lot of empty seats.

As the Cleveland Browns took on — and lost 43-13 to — the Tennessee Titans at FirstEnergy Stadium, for instance, fans took to social media to express their shock at the number of empty seats:

Lots of empty seats in Cleveland.

At EverBank Field, the Jacksonville Jaguars also found a horde of empty seats when the lost big to the Kansas City Chiefs 40-26: 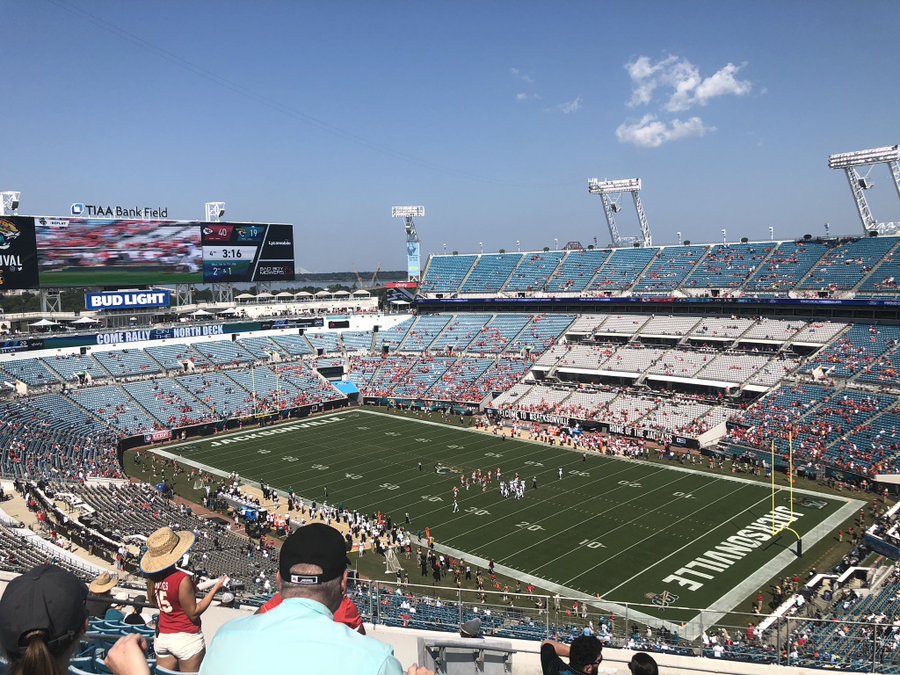 I thought @Panthers fans were excited about this season; what’s with all the empty seats in the home opener? 💺 https://t.co/zN3EKkn5eU

Looks like a lot of empty seats in Jacksonville

Did the @Jaguars forget to tell anyone they had a season opener today? Lots of empty seats. @EmptySeatsPics

Meanwhile, at the Miami Dolphins’ Hard Rock Stadium, the Baltimore Ravens flew into town to skunk the Dolphins 59-10. But fans seemed lacking by some reports:

Hard Rock Stadium has a lot of empty seats for the Miami Dolphins season openerhttps://t.co/LrR75EJR6v

To be fair, plenty of fans also understand the process (one even told us he’d prefer to wait for Trevor Lawrence).

Still, a lot more empty seats now than a couple hours ago. pic.twitter.com/biK25AOyzI

Ready for kickoff &….a lot of empty seats. It’s Miami. Better things to do.
Ravens v Dolphins on @WJZ 🏈 pic.twitter.com/ZKBPsf386a

There are a lot of empty seats at the Ravens/Dolphins and Chiefs/Jaguars games. Interested to see what those attendance numbers are.

At Charlotte, North Carolina’s, Bank of America Stadium, as the Carolina Panthers geared up to lose a squeaker to the Los Angeles Rams 30-27, fans took to Twitter to remark on the empty seats:

Lot of fans dressed as empty seats at the Panthers game. Don’t blame them. I wouldn’t pay to sit in a broiler for three hours, either.

Surprisingly, a lot of empty seats here at Bank of America Stadium for Panthers’ opener. pic.twitter.com/vt9Ns6tUhQ

There's nobody in Charlotte to watch Rams/Panthers – even FEWER in Miami to watch Ravens/Dolphins I mean empty seats everywhere you look WTH's going on? This isn't the pre-season is it? Is it too hot outside? People finally over the NFL? This is nuts! #NFLSunday