The international soccer organization FIFA claimed in a statement on Wednesday that it had intervened to prevent officials in Qatar from seizing “permitted items” from fans entering stadiums, a message interpreted to mean that fans will now be allowed to bring LGBT messages and anti-Iran banners into the games.

The Qatari government has yet to respond to FIFA’s statement at press time confirming the organization’s claim that it had “received assurances by authorities” that security officers would allow the controversial items in question, leaving open the possibility of more incidents of Qatar’s sharia law enforcers assaulting fans found to be possessing political paraphernalia that the regime disapproves of.

FIFA responded to the criticism by using its gay pride month message this year to proclaim the World Cup a “celebration of diversity,” prompting activists to condemn both FIFA and Qatar, and both fans and players to attempt to display pro-LGBT rainbows at the event itself. The soccer agency caved, however, under pressure from Qatar, blocking Western soccer teams from wearing rainbow armbands and clothes with human rights messages on them. 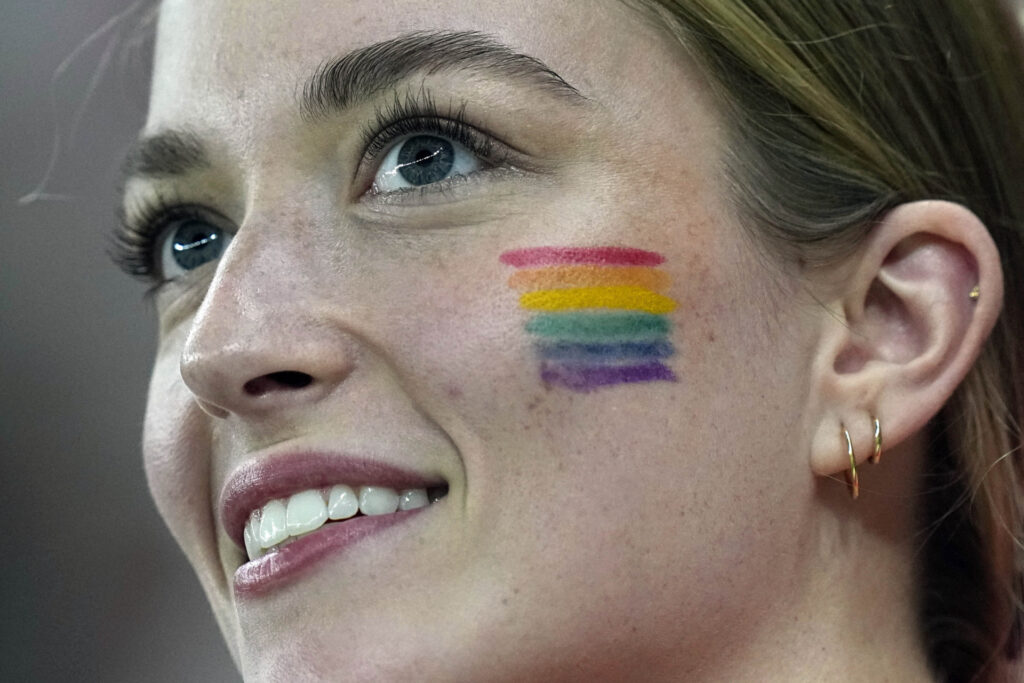 A supporter of Canada shows the rainbow colors on her face ahead of the World Cup group F soccer match between Canada and Morocco at the Al Thumama Stadium in Doha , Qatar, Thursday, December 1, 2022. (AP Photo/Pavel Golovkin)

The British newspaper i reported on Wednesday that, following a series of accusations that Qatari officials had harassed fans and stolen gear they deemed haram, FIFA issued a vague statement appearing to claim that such incidents would not be repeated.

“FIFA is aware of some incidents where permitted items were not allowed to be displayed at stadiums,” a spokesperson told i. “FIFA has received assurances by authorities that venue commanders have been contacted in relation to the agreed rules and regulations for the Fifa World Cup Qatar 2022. Fifa continues to work closely with the host country to ensure the full implementation of related regulations and agreed protocols.” 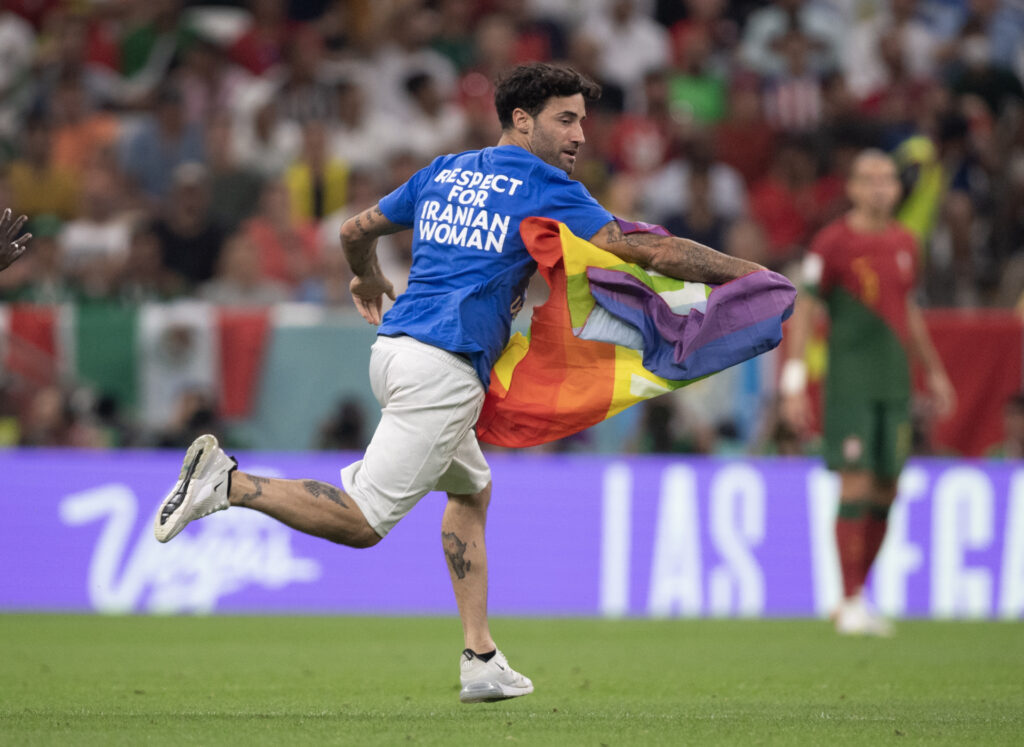 A protester with a rainbow flag and a ‘Respect For Iranian Women’ slogan on his T-shirt runs on the field during the FIFA World Cup Qatar 2022 Group H match between Portugal and Uruguay at Lusail Stadium on November 28, 2022 in Lusail City, Qatar. (Visionhaus/Getty Images)

The newspaper noted, however, that the Qatari government’s silence on the matter made it impossible to confirm if its state agents would abide by the alleged assurances. FIFA also did not specify which authorities in Qatar had made such “assurances,” leaving open the possibility that some law enforcement agencies would not respect them.

“However, asked by i to offer assurances that fans who wish to take rainbow items to stadiums would not face harassment from local security officials or having them confiscated, the Supreme Committee did not respond,” the newspaper noted, referring to Qatar’s “Supreme Committee for Delivery and Legacy,” the government agency tasked with running the World Cup. 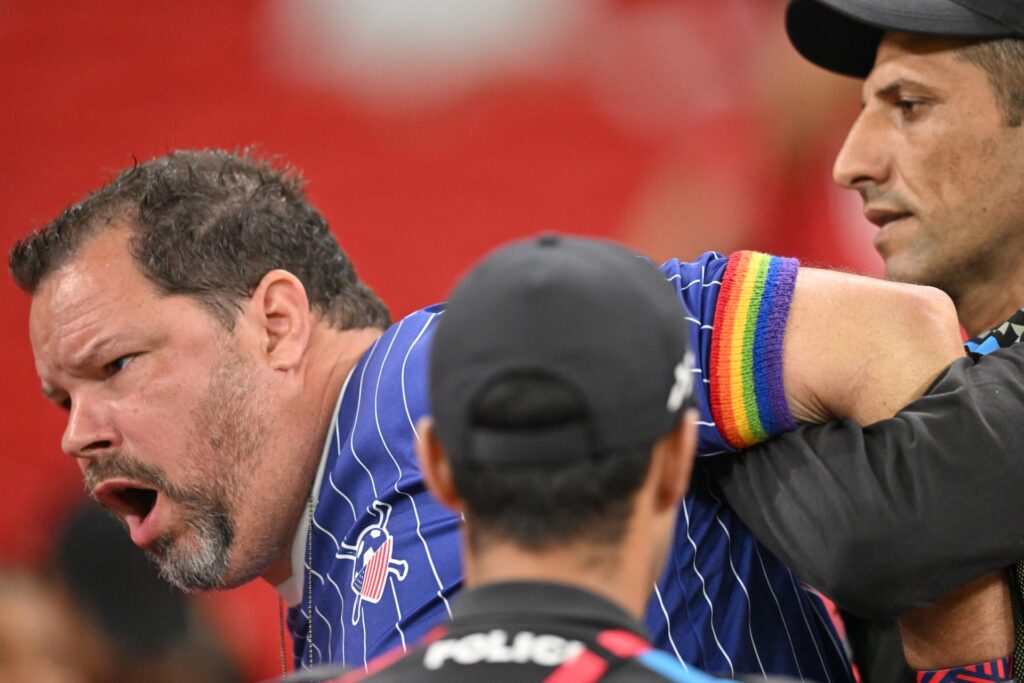 A supporter of USA, wearing a rainbow armband, is escorted out ahead of the Qatar 2022 World Cup Group B football match between Iran and USA at the Al-Thumama Stadium in Doha on November 29, 2022. (GLYN KIRK/AFP via Getty Images)

The unanswered questions surrounding the FIFA statement did not stop multiple news agencies from reporting that a variety of previously banned material would now be welcome at the tournament. The American agency Radio Free Europe/Radio Liberty (RFE/RL) interpreted the statement as meaning that fans could now bring anti-Iranian regime banners into the stadiums, noting that Iran’s loss to America on Tuesday meant the country’s team was officially out of the tournament.

“FIFA has given permission for the display of banners supporting protests in Iran and rainbow items at the World Cup soccer tournament in Qatar — but only after the Middle Eastern country was eliminated from the competition,” RFE/RL reported, listing some of the banned items it interpreted to now be allowed as banners reading anti-Iranian regime slogans. Also allowed, the outlet claimed, would be simple messages previously banned such as “women, life, freedom,” a nod to the ongoing nationwide protests triggered by Islamist authorities beating 22-year-old Mahsa Amini to death for allegedly wearing her hijab incorrectly.

Iran International, an outlet that tracks news related to the Islamic regime and Iranian people generally, similarly reported “banners in support of Iranian protesters are allowed to be taken into stadiums in Qatar.”

“FIFA is aware of some incidents where permitted items were not allowed to be displayed at stadiums. FIFA has received assurances by authorities that venue commanders have been contacted in relation to the agreed rules and regulations for #FIFAWorldCup 2022,” FIFA said.

Iran International broke the story this week that the Qatari government, which has long struggled with its Gulf neighbors over its friendly ties to Iran, was allegedly working with the Islamic Revolutionary Guard Corps (IRGC), offering the regime lists of names of Iranian fans attending World Cup games. The IRGC is a U.S.-designated terrorist organization that serves as a formal wing of the Iranian military.

Doha also reportedly limited international media coverage of Iran games to prevent embarrassing coverage, as many Iranian soccer fans were cheering for their teams but openly booing the Islamist Republic national anthem and jeering against the regime. Following America’s win against Iran on Tuesday, Iranians at home took the streets to celebrate, engaging in illegal street parties and launching fireworks to celebrate America – a pointedly more muted response to that result than in the United States itself.

At least one man, 27-year-old Mehran Samak, was shot dead in Iran while honking in his car to celebrate America’s victory.

Iran International claimed that, while Qatar cooperated to some degree with the IRGC, intercepted communications indicate that Tehran was displeased that Doha did not do more to stifle dissent.

The Associated Press reported that FIFA’s statement also appeared to mean that rainbow flags and pro-LGBT items would now also be allowed into stadiums. Qatar is violently repressive against LGBT people and those the regime suspects may be LGBT.

In an exposé published shortly before the tournament, i documented stories of individuals who claimed that Qatari police used gay dating mobile phone applications to lure gay people into beatings, arrests, and gang rapes. One man who spoke to the newspaper under a pseudonym said that police gang-raped and deported him when he attempted to meet a foreign date at a hotel.