Warren began her speech by recounting her humble origins in Oklahoma, and the experience of watching her mother decide to save the family home by taking a minimum-wage job.

That, she said, helped her understand the struggles of working people across America today.

Warren re-traced her steps from college; to marriage; to a commuter college she could afford to attend while working as a waitress; to teaching special needs children in public schools; to pregnancy and losing her job; to law school; and to the legal teaching career that followed.

Repeating some of the lines she has used on the debate stage, Warren described the U.S. government as fundamentally corrupt. She said that powerful interests like the Koch brothers had bought Washington to protect their profits. 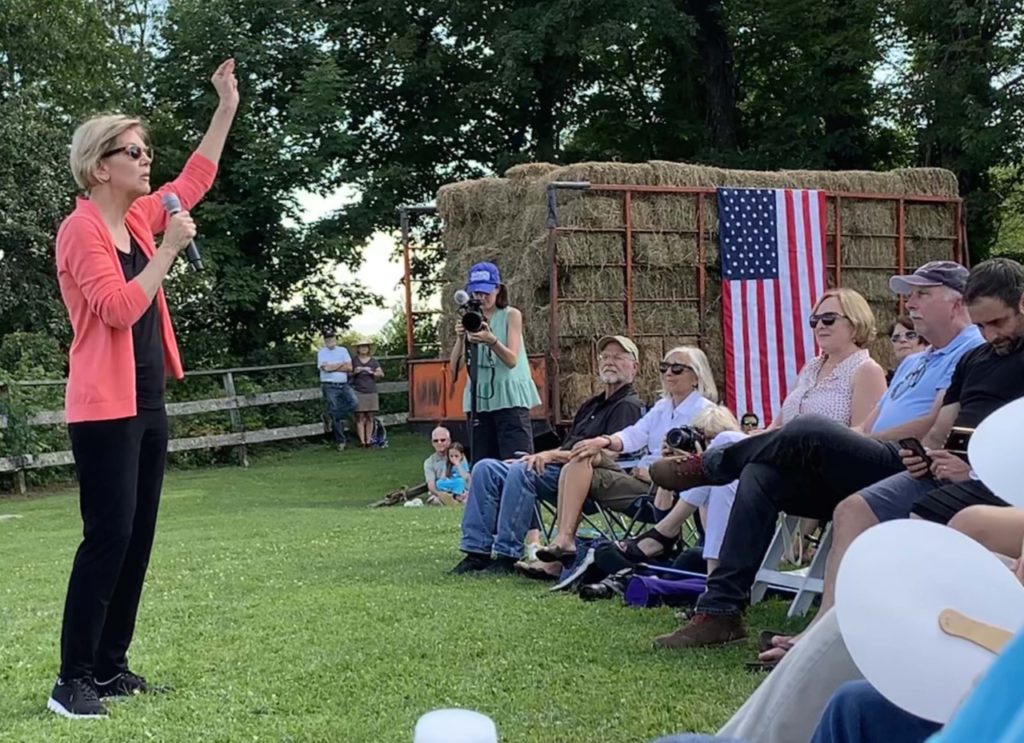 Warren proposed a “two-cent tax on the top one-tenth of one-percent” of wealth in the U.S.to provide funds to make other social changes possible.

In addition, she said, she wanted to see a constitutional amendment “to protect ever vote cast like it’s in Fort Knox so that it’s not subject to being hacked by the Russians, the Koreans, or anybody else with a computer.” She also proposed an end to voter ID laws (“voter suppression”), the gerrymandering of congressional districts, and the Citizens United precedent that allows corporations to use money for political speech.

One warmup speaker declared that Warren understood that “the American Dream does not exist, for many, anymore,” and would fight to restore it, “and not just for the rich and powerful.”

One warmup speaker declared that Warren understood that “the American Dream does not exist, for many, anymore,” and would fight to restore it, “and not just for the rich and powerful.”

“How can we get Republicans who voted for Trump to show their remorse, and vote for you?” one woman asked Warren.

“I don’t know about the remorse, I just want the vote,” Warren joked, adding that only one of her three brothers was a Democrat.

She added that Republican voters she had spoken to had seemed receptive to her idea of a two percent wealth tax. When they heard about it, she said, “they see government can work for them … government is on their side.”

One woman, who would not give her name to Breitbart News, said that she expected Warren to win the Democratic nomination but not the general election. She declined to give her reasons.
Joel B. Pollak is Senior Editor-at-Large at Breitbart News. He earned an A.B. in Social Studies and Environmental Science and Public Policy from Harvard College, and a J.D. from Harvard Law School. He is a winner of the 2018 Robert Novak Journalism Alumni Fellowship. He is also the co-author of How Trump Won: The Inside Story of a Revolution, which is available from Regnery. Follow him on Twitter at @joelpollak.