Roberson asked his question at an outdoor town hall meeting at Limestone College that drew roughly 400 to 500 people on a hot, humid afternoon.

Black people have traditionally voted Democrat since 1948, when [Harry S.] Truman got 77% of the black vote. And we still vote Democrat today, even though we lead the world in incarceration, we have the education gap, we have the wage gap, et cetera. So a lot of young people my age, my race, we are trying to find the incentive in voting Democrat. Why should we trust the party, and how would your administration hold your party accountable for the vote?

Biden acknowledged that the question was fair, but never quite answered it.

Instead, he spoke for over ten minutes about his record on criminal justice, defending — and acknowledging criticisms of — his 1994 crime bill.

Biden also repeated a comment he made earlier this week — that there was racism throughout American society and that it was a “white person’s problem.”

Roberson later told Breitbart News that he was satisfied with Biden’s answer, though he said it was a “blanket answer.” It was “thoughtful — he knows his stuff,” Roberson said.

The speech was largely a repetition of Biden’s stump speech — complete with the Charlottesville “very fine people” hoax — although there were two exceptional moments.

One came after Biden claimed that Trump was inspiring violent racists, when a woman interjected from the audience: “Get rid of the orange Hitler!” 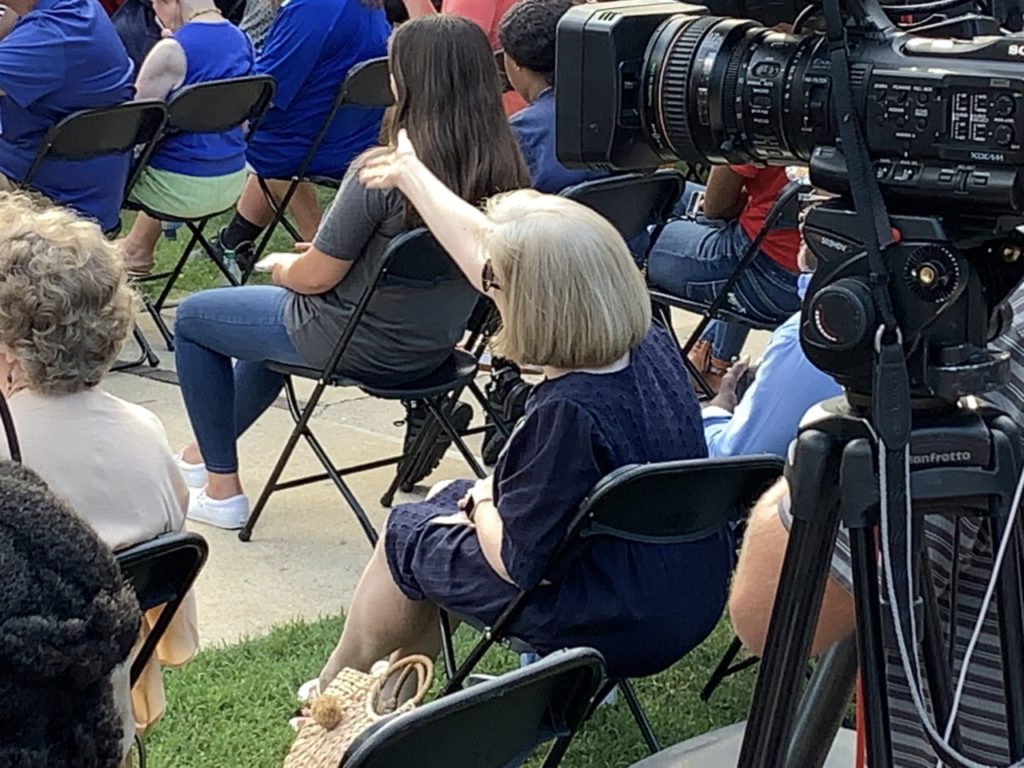 Woman who shouted “Get rid of the orange Hitler!” (Joel Pollak / Breitbart News)

Biden replied: “I’ll tell you — well, I don’t want to be tempted here.”

Another moment came when Major Ginger Tate of the U.S. Army National Guard Signal Corps presented Biden with coins that she and fellow soldiers had collected on tour in Afghanistan and waited six years to deliver to him or to President Barack Obama.

Major Tate tearfully thanked Biden for inspiring her. He gave her a coin of his own — a commander’s coin from Afghanistan — and returned a salute.

A local woman named Sarah said that she was voting for Biden because “I’m a Democrat first of all” and because he would “follow the same policy as Obama on health care.”

During his question-and-answer session, Biden defended his proposal to provide a public option as a supplement to Obamacare, attacking the “Medicare for All” plan proposed by Sen. Bernie Sanders (I-VT) and others as too expensive, too disruptive, and difficult to pass.