An appeals court reinstated the presidential candidacy of Saif al-Islam Qaddafi, son of late dictator Muammar Qaddafi, after he was disqualified from running in this month’s Libyan presidential election.

A total of 98 candidates registered for the December 24 election; Qaddafi was one of 25 to be disqualified.

Qaddafi emerged from a long spell of captivity by one of Libya’s many armed factions to run for president, using nostalgia for his father’s rule among southern Libyan tribes and militias to rally supporters. The national election commission disqualified him on November 24 because he was convicted in absentia of war crimes in 2015.

When Qaddafi’s lawyers sought to file an appeal against his disqualification, they found the courthouse they were required to use in the city of Sebha had been overrun by gunmen loyal to military strongman Khalifa Haftar, one of Qaddafi’s prospective opponents. Haftar’s military organization, the Libyan National Army (LNA), claimed the gunmen were merely there to protect the courthouse.

The court in Sebha is once again functional, and on Thursday it overrode the election commission and ruled Qaddafi eligible to run for president, prompting his supporters to dance in the streets of the city.

The International Criminal Court (ICC) has also charged Qaddafi with two counts of crimes against humanity for actions he took to support his father’s crumbling regime in 2011. The ICC issued a warrant for Qaddafi’s arrest in June 2011. 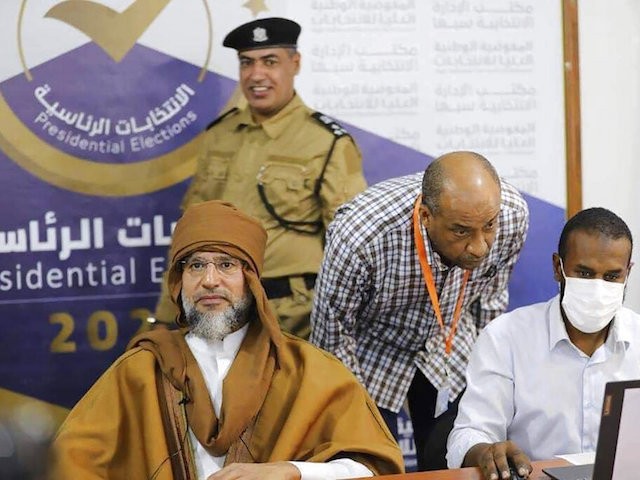 Seif al-Islam, left, the son and one-time heir apparent of late Libyan dictator Moammar Gadhafi registers his candidacy for the country’s presidential elections next month, in Sabha, Libya, Sunday, Nov. 14, 2021. Al-Islam, who was seen as the reformist face of Gadhafi’s regime before the 2011 uprising, was released in June 2017 after more than five years of detention. (Libyan High National Elections Commission via AP)

Anas El Gomati of the Tripoli-based Sadeq Institute told Al Jazeera News on Thursday the court-ordered reinstatement of Qaddafi, and several other disqualified candidates, would diminish the already low level of public trust in the election.

“I think it is going to puzzle many Libyans today who have protested the candidacy of individuals like Saif al-Islam Gaddafi and Khalifa Haftar but who are now on the ballot box,” Gomati said.

“It’s a major plot twist but it’s not the last one. I think there’s still a few more to come,” he added.

“The electoral process is slowly achieving a hat trick, destroying the credibility of the U.N., of Libya’s judiciary, and of elections as a way out of the crisis,” agreed Libya analyst Emadeddin Badi.

As Gomati indicated, Haftar’s presidential candidacy was struck down by a Libyan appeals court on Tuesday after the national election commission allowed him to run.