Hong Kong badminton star Angus Ng Ka-long, ranked as the number 9 player in the world going into the Olympics, was unexpectedly defeated on Wednesday by the far lower-ranked Guatemalan player Kevin Cordon.

Some dismayed fans blamed the Chinese state and its agents in the Hong Kong government for rattling Ng by attacking him for his choice of apparel in an earlier match: a plain black jersey that supposedly reminded thin-skinned Communists of the 2019 pro-democracy protesters.

27-year-old Ng wrote an Instagram post on Sunday explaining that he meant no political statement by wearing the black jersey for his first appearance in the Tokyo Summer Games. He said he was only able to print his name on the shirt because he was unable to obtain the necessary authorization to include Hong Kong’s regional flag, which depicts a bauhinia blakeana flower, also known as the “Hong Kong orchid.”

Ng said he was obliged to provide his own sportswear because his sponsorship deal with the Yonex badminton brand ended, so he chose an outfit he felt “comfortable to wear” from another provider, Lululemon. Although unusually plain, the black shirt was fully compliant with Olympic regulations. Ng was subsequently able to procure jerseys from FILA, the official sponsor of the Hong Kong Olympic team.

The bauhinia blakeana is named after early Sir Henry Blake, an early 20th-Century British governor of Hong Kong and botany enthusiast, but for some reason the hyper-sensitive Chinese Communist Party (CCP) has not blown a gasket over that little detail yet. Perhaps they realize it would be difficult to rename or jettison this particular remainder of superior British governance after a century of tradition. 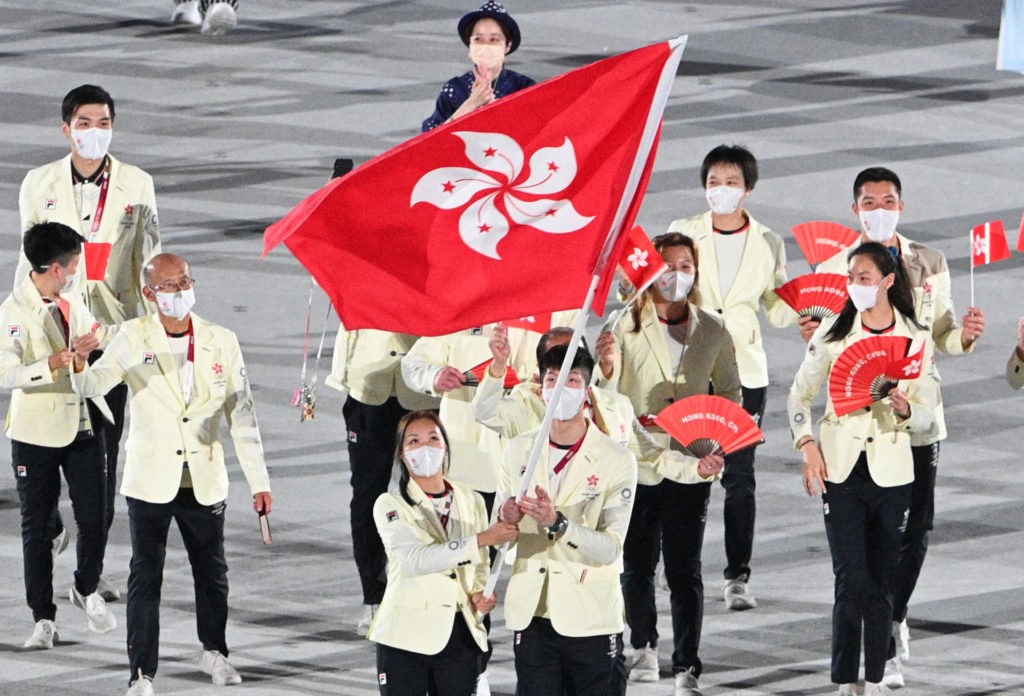 Hong Kong’s flag bearer Ying Suet Tse and  Cheung Ka-long and their delegation parade during the opening ceremony of the Tokyo 2020 Olympic Games, at the Olympic Stadium, in Tokyo, on July 23, 2021. (Martin Bureau/AFP via Getty Images)

“I have always been proud to represent Hong Kong in competitions. Deep down in my heart, I also like this bauhinia flower very much,” Ng wrote on Instagram.

“I hope when people are watching the Olympics, they can focus on athletes’ performance, rather than on my shirt,” he continued, admonishing those attacking him to “please figure out what the matter was about before you criticize.”

The reason Ng wrote this explanation is that pro-Beijing Hong Kong politician and teacher Nicholas Muk “strongly condemned” him on Saturday for failing to wear a “tidy uniform with the HKSAR [Hong Kong Special Administrative Region] flag printed.”

“Please withdraw from the game if you do not want to represent Hong Kong China,” Muk sneered in a Facebook post, calling Ng’s all-black outfit “laughable.”

“We have had bad experiences so we are afraid,” chipped in another Hong Kong politician named Ronny Tong, alluding to the 2019 protests.

“It’s better not to wear black, otherwise people may have a heart attack while watching the television,” he said.

“The attention on Ka-long’s jersey is – in fact – a communication problem within the badminton team, we can do better. We are working hard on handling the matter,” said the Hong Kong Badminton Association in a sheepish statement on Sunday.

Ng was sporting a politically correct green-and-white outfit with the bauhinia flag when he took the court against Guatemala’s Cordon, ranked fifty places lower in worldwide standings, who proceeded to thrash him 2-0.

“I’d never met him before and was not used to his style. He played with no pressure and many of his strokes were very good,” Ng said graciously after his defeat.

“I was tense and under pressure and I didn’t perform, but he played an exceptionally good game,” he added, which reminded stunned Hongkongers of exactly why he was under so much pressure, and who dumped it on him.

Ng later confirmed on Instagram that he did indeed feel distracted by the black jersey criticism.

“The incident has calmed down a bit and not too many people mentioned it, but since it’s not too long ago, it’s not that easy to put it behind me. I feel the majority of people supported me and I thank them for their support, but maybe my mental control was not at its best,” he wrote, adding stress from the political controversy was unhelpfully piled on top of pressure from “the long preparation for the Olympics.”

“It would be a lie if I say my emotions remain unaffected, but I have tried my best to adjust my mentality and focus on the match. During these huge competitions, I hope people can focus more on athletes’ performance, rather than things off the court,” he said in an interview after his defeat.

Ng also said he did not really care for the green-and-white FILA outfit he was given and preferred the black one that Hong Kong politicians could not stomach. This unleashed a torrent of criticism against FILA from anguished Hong Kong social media users.

As for Muk, the pro-Beijing blowhard apologized for his remarks online halfway through Ng’s fateful match against Cordon, claiming he wrote his sneering Saturday post in haste because he was “surprised” and “emotional” to see Ng wearing the black jersey. Then he deleted his Saturday post, and soon after his entire Facebook account, because enraged Hongkongers were tearing him to shreds.

“When will you apologize for your speech? As a teacher, how can you teach your students when you cannot even own up to your mistakes?” one of Muk’s critics demanded.

“Are you satisfied now? Have you succeeded?” cried another. “You do not even know how to apologize! You have to understand that something you did cannot be undone.”