U.S. Representatives Seth Moulton (D-MA) and Peter Meijer (R-MI) stoked a fire of controversy Tuesday after their surprise visit to Kabul, Afghanistan, exposed some basic truths about the Biden administration’s withdrawal of troops from the region.

“After talking with commanders on the ground and seeing the situation here, it is obvious that because we started the evacuation so late, that no matter what we do, we won’t get everyone out on time, even by September 11,” the two congressmen said in their joint statement.

Shortly after news broke of their visit,  Democrats, media figures, and other U.S. officials immediately scolded the pair, denouncing them as selfish grandstanders who potentially robbed an American or Afghan refugee of a flight home.

Whether it is Haiti or Afghanistan, taking up space in a disaster zone for your own ego helps no one. https://t.co/Unh6HXvZjd

Two less refugees will be in the US today because of the selfishness of Seth Moulton and Peter Meijer. https://t.co/4Z2PaxNy9k

Seth Moulton deserves a primary from a Biden-Harris Democrat.

Seth Moulton and Peter Meijer took up resources (including, presumably, two tickets home) that could have gone toward the evacuation. https://t.co/CIW1cQ64e8

A senior administration official called Seth Moulton's and Peter Meijer's Afghanistan joy ride "moronic as it is selfish" while others said it "served as a distraction for military and civilian staffers attempting to carry out frenzied rescue efforts."https://t.co/eEkFW9HerR

As just one among many possible bad outcomes, Moulton & Meijer could have been taken hostage during their reckless, grandstanding action, which would have diverted considerable resources from the evacuation of refugees. It's mind-boggling how reckless their behavior was. https://t.co/tTTtRlIjsx

the pile on on moulton is going to be high. https://t.co/8UBRCpmmDN

Was there something accomplished by the Moulton-Meijer trip that justifies the diversion of resources on the ground? I'm not seeing any 'here is what they actually did' explanations, but I guess news just broke.

Reps. Seth Moulton (D-MA) and Peter Meijer (R-MI) infuriate pretty much everyone with a performative 24-hour unauthorized trip to Afghanistan to prance in front of cameras while taking seats from those who need them.

Moulton and Meijer made it clear they “left on a plane with empty seats, seated in crew-only seats to ensure that nobody who needed a seat would lose one because of our presence.” They also kept the trip secret to minimize “the risk and disruption to the people on the ground,” as Breitbart News reported.

Nevertheless, officials were not happy.

“It’s as moronic as it is selfish,” one anonymous official told the Washington Post. “They’re taking seats away from Americans and at-risk Afghans — while putting our diplomats and service members at greater risk — so they can have a moment in front of the cameras.” 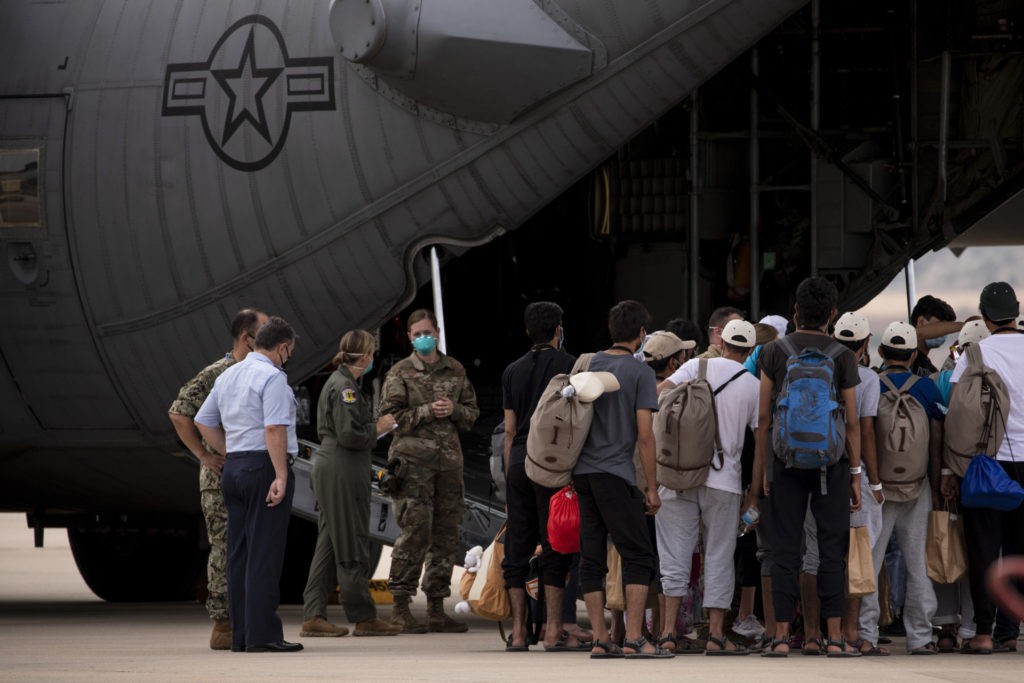 Afghan people, who were evacuated from Kabul, queue to embark into a U.S. air force plane at Torrejon Military Air Base on August 24, 2021 in Madrid, Spain. (Pablo Blazquez Dominguez/Getty Images)

According to Politico, the surprise trip spurred House Speaker Nancy Pelosi (D-CA) to issue a warning to congressional lawmakers on Tuesday.

“Given the urgency of this situation, the desire of some Members to travel to Afghanistan and the surrounding areas is understandable and reflective of the high priority that we place on the lives of those on the ground,” she wrote in her letter.

“Member travel to Afghanistan and the surrounding countries would unnecessarily divert needed resources from the priority mission of safely and expeditiously evacuating America and Afghans at risk from Afghanistan,” she added.