Animal rights groups are working to save dozens of helpless service dogs left behind when the U.S. military completed its withdrawal on Tuesday local time from Afghanistan.

Trained dogs used by #US #Forces have also been left at #Kabul airport pic.twitter.com/iSVtbFDqHB

Dr. Robin R. Ganzert, CEO of Washington, DC,-based American Humane, said on Monday dozens of contract dogs have been left behind to be “tortured and killed at the hands of our enemies.”

“As the country’s first national humane organization and largest certifier of animal welfare in the world, it sickens us to sit idly by and watch these brave dogs who valiantly served our country be put to death or worse,” Ganzert said.

Another group, Veteran Sheepdogs of America, said on Monday it was attempting to get 51 working dogs out of Kabul. On Tuesday, the group said it was able to raise $1.67 million to charter a 737 plane to evacuate the animals, but needed another $500,000 to replace an animal rescue operation that “fell through.”

UPDATE: Kabul Airfield. Working on getting working dogs out. Whatever mess you think Kabul is… it's worse!https://t.co/3vaYMaMAyd
@veteransheepdogsofamerica.org pic.twitter.com/tLEFICE8eK

One of the major operations to save stranded animals, Kabul Small Animal Rescue, was founded by an American named Charlotte Maxwell-Jones who refused to leave without saving some 250 animals in her care, not all of them military or contract service animals, as Maxwell-Jones’ group has been working to save strays in Kabul since 2018.

Maxwell-Jones described some of the animals she has been able to ship out of Afghanistan over the past month as companions befriended by deployed service members. She said she received little help from U.S. officials at first, but now “people in the U.S. are getting their senators” and state representatives involved.

Some of the dogs we are trying to get to safety. #OperationHercules pic.twitter.com/uQqmbLF37W

The International Society for the Prevention of Cruelty to Animals, which worked with Kabul Small Animal Rescue on its #OperationHercules project, reported on Monday that Maxwell-Jones was “forced to leave the airport with one puppy under her arm as final military evacuations occurred.”

“She was escorted by the Taliban back to her rescue shelter, 7 miles outside of Kabul, where she remains safe for the moment,” SPCA International said, crediting Maxwell-Jones with rescuing “46 working dogs and several personal pets belonging to fleeing Americans.”

The SPCA International update said Kabul Small Animal Rescue was forced to release many of its animals as strays when it was denied access to aircraft during the chaotic final hours of the U.S. military withdrawal:

Here is what we know: In the end, the dogs and their caretakers were explicitly NOT allowed to board military aircraft, and numerous private charter aircraft were not granted access to the airport either. Charlotte was informed that most of the KSAR dogs had to be released into the airport on August 30 as the airport was evacuated – turning once rescued shelter dogs into homeless strays. They were not given access to the flight we had secured to transport them out of the country. They are within the airport in an area used for housing employees at the far end of the flight line. We haven’t been able to confirm the number of dogs released, nor can we confirm whether the U.S. Military evacuated the 46 working dogs that had been under KSAR’s care when they left. We are urgently pressing for more details, and while this is more difficult now that the U.S. military has completely evacuated Kabul, we refuse to give up.

“We are heartbroken that the aircraft we secured to transport the rescued dogs of Kabul Small Animal Rescue out of Afghanistan were not ultimately allowed to take the animals and their caretakers safely out of the country,” said SPCA International director of programs Lori Kalef.

SPCA International mentioned that one of the obstacles to evacuating the animals was a recently enacted policy from the U.S. Centers for Disease Control (CDC) “suspending transports of dogs from Afghanistan and more than 100 other nations into the U.S.”

Germany and Spain were more successful and repatriated all their work dogs without a problem. 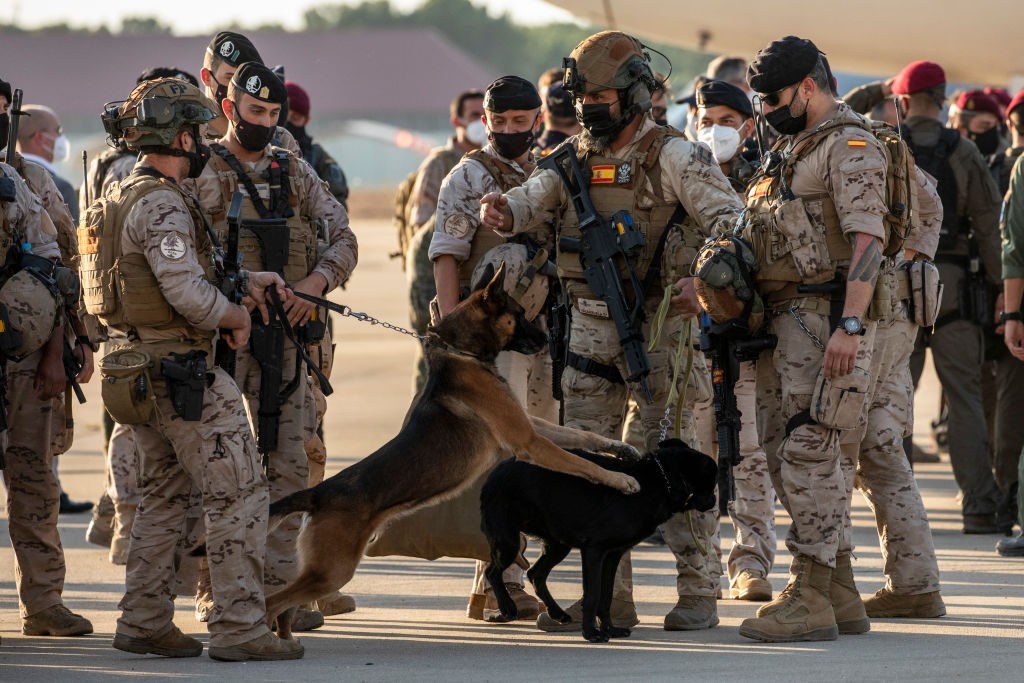 Dogs of members of Spanish forces play as they disembark from a plane after evacuation from Afghanistan at Torrejon Military Air Base on August 27, 2021 in Madrid, Spain. (Pablo Blazquez Dominguez/Getty Images) 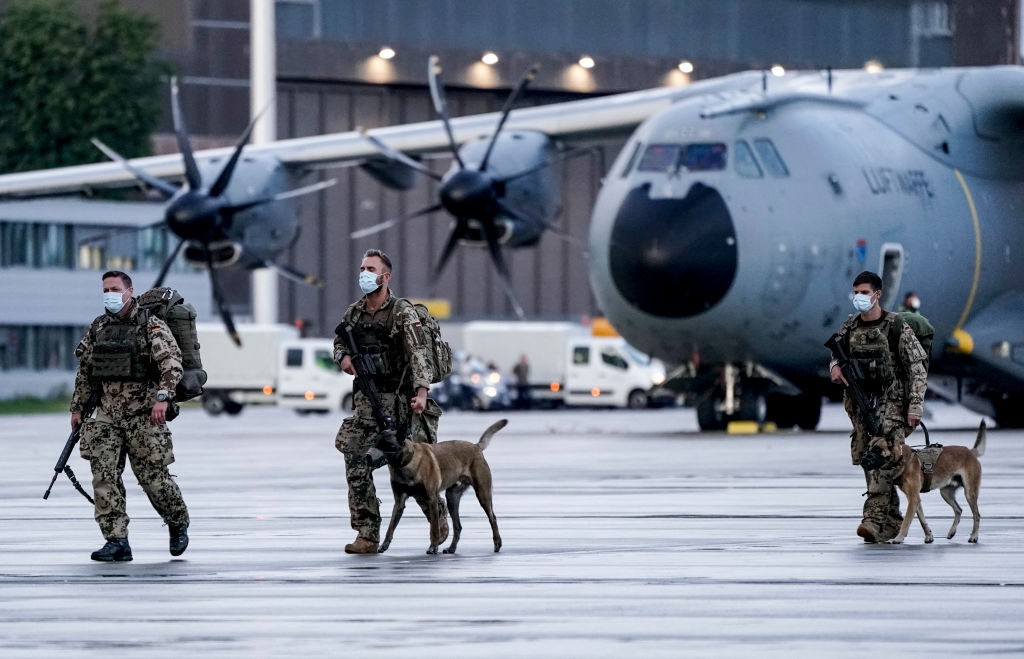 Soldiers from German Bundeswehr and their dogs arrive at the airport in Wunstorf, northern Germany on August 27, 2021 at the end of a military evacuation operation to fly out German nationals, local workers and other people at risk from Kabul, Afghanistan. (AXEL HEIMKEN/AFP via Getty)

Farthing and his supporters noted that he transported his animals in the cargo hold of a chartered aircraft, where humans could not travel, and he tried to bring human staffers out on his flight as well.

“Get me out of Afghanistan with my staff and my animals. I served for 22 years in the Royal Marine commandos. I am not taking this [expletive] from people like you who are blocking me. You’ve got ’til tomorrow morning,” Farthing told an adviser to British Defense Secretary Ben Wallace in a recorded message leaked to British media.

Update, 12:00 PM EST: Pentagon press secretary John Kirby on Tuesday clarified that the dogs pictured in cages by Kabul Small Animal Rescue are animals under the care of that organization, not dogs under the direct care of the U.S. military.

“The U.S. military did not leave any dogs in cages at Hamid Karzai International Airport,” Kirby said.

The animal rights groups quoted above described the animals they were concerned about as “service dogs,” “working dogs,” or dogs “contracted” to U.S. operations in Afghanistan, not necessarily dogs directly owned and trained by the U.S. military. As noted above, Kabul Small Animal Rescue stated some of the animals in its care were companions adopted by American personnel deployed to Afghanistan.

In case you missed this earlier, the @DeptofDefense has ordered ALL contract military working dogs to be left behind in #Afghanistan. Who are the contractors and who are the people in the chain of command that did this? How much more does America need to trim this tree?!?! pic.twitter.com/qGmIOpfmv7

Many references to their accounts on social media have not made that that distinction, and those concerned about the fate of the animals may not be mollified by the clarification of ownership.