Chinese state media reported Sunday on a new “five-year plan” to massively increase in vitro fertilization (IVF) to stave off demographic collapse. The Chinese government officially admitted over the weekend that birth rates have dropped beneath one percent, hitting a 43-year-low.

Some analysts believe China might have actually entered a period of net population decline, a conclusion reached by examining records the Communist Party probably would not think of altering to conceal the true extent of its demographic collapse.

The government’s latest official numbers, reported by the state-run Global Times on Saturday, found a birth rate of 8.52 per thousand in 2020.

The Global Times quoted analysts who said the coronavirus pandemic dramatically accelerated a downward population trend that began years ago:

An article published in May this year in a professional journal Population Research, affiliated with China Population and Development Research Center, found out that the monthly decline of birth rate has nosedived in 2020 compared with the same period of 2015, with November and December declining above 45 percent respectively.

Meanwhile, the statistics from the Ministry of Civil Affairs show that there were 5.88 million registered marriages during the first three quarters this year, a fall of 17.5 percent compared with last year. There were 966,000 couples registered for divorce in the first half of this year, a decline of 50 percent compared with the same period last year.

Chinese officials appear to have underestimated the tremendous inertia of population decline produced by the nefarious One Child Policy, a strict limit of one child per family imposed four decades ago to combat overpopulation. The one-child limit was relaxed to two children in 2015 and loosened again to three children in August 2021, but very little improvement in birth rates has occurred. 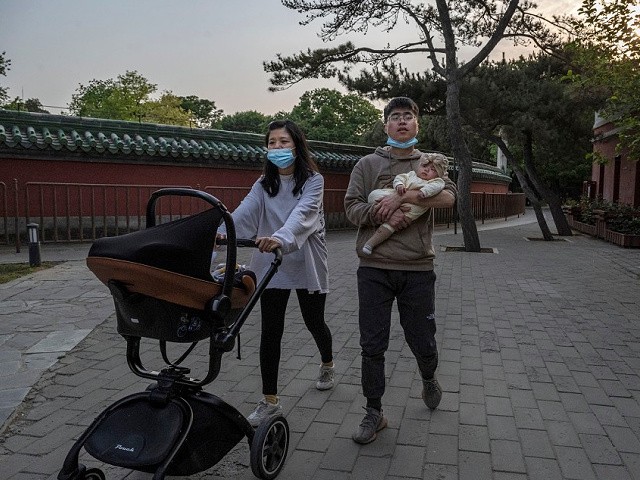 On Sunday, the Global Times reported Beijing is “following the implementation of the three-child policy” by greatly increasing the number of clinics offering IVF:

According to the National Bureau of Statistics, the proportion of women aged 35 and above who are not of optimal child-bearing age is increasing year by year. This has resulted in various fertility problems among them.

From 2007 to 2020, the infertility rates in China have increased from 12 percent to 18 percent, and more couples with fertility difficulties are choosing to have children through assisted reproductive technology, The Paper reported.

CNN speculated in August that the Chinese Communist Party (CCP) has been reluctant to expand IVF services until now because it was afraid well-heeled unmarried career women would use the technology to have children outside of marriage. The CCP has been trying to encourage marriage and maintain interest in family traditions as it grapples with its population problem.

In fact, some Chinese authorities worried IVF technology could make the population problem worse because women would assume they could use egg freezing and in vitro fertilization procedures to have children later in life, removing any lingering sense of urgency to get married and begin having children at a young age.

Single Chinese women complained about government policies that explicitly banned hospitals from giving unmarried women access to assisted reproductive technologies. Single women had to make expensive trips abroad for egg treatment and storage, often to Hong Kong. On the other hand, there are few restrictions against men freezing their sperm.

“We encourage young people to marry and reproduce at the most appropriate time. The public needs to be better informed of the medical risks involved with egg-freezing technology and the success rate of fertilization by thawing frozen eggs is very low,” fertility doctor Sun Wei argued this year.

The South China Morning Post (SCMP) reported last week that birth rates are declining even in rural China, which has long been able to compensate for population decline in the cities. Rural birth rates are now declining faster than those in cities, possibly because lower-income rural young people are even more anxious about the high cost of raising children.