MOORE, Oklahoma — Alton Nolen, the man who beheaded one woman and severely injured another at Vaughan Foods in Moore, Oklahoma, was apparently a radicalized Muslim. Nolen attended the same mosque as Zacarias Moussaoui, a man convicted in federal court of conspiring to kill U.S. citizens as part of the September 11 attacks, Breitbart Texas has learned.

Saad Mohammed, the Board Chair of Oklahoma’s Council on American-Islamic Relations, told Breitbart Texas that Nolen attended services at the Islamic Society of Greater Oklahoma City (ISGOC) every Friday.

“He always sat in the back, he was very quiet and very low key,” Mohammed said. “Not someone you would notice right away. If you were to walk into an empty room, you wouldn’t have noticed him…He was a little odd, a little strange in the way he carried himself. But we [at the mosque] never made anything of it.”

While Mohammed denies that his mosque encourages radicalization, he revealed that Moussaoui also attended ISGOC.

Mohammed recalled Moussaoui expressing a dislike towards non-Muslims. “I lectured a class that day, and [Moussaoui] said he disagreed with non-Muslims being in the Mosque,” Mohammed said. “We didn’t pay any attention because that’s just how some people think. But you know, look what happened. So we’re going to try to monitor for [strange behavior] more.”

At this point, however, it is unclear how ISGOC monitors alarming behavior.

Massaoui, who is a French citizen, is currently serving a life sentence without parole in Colorado. FBI reports show that in early 2001, Massaoui displayed odd, alienating behavior at ISGOC; he approached Suhaib Webb, the mosque’s former Imam, and asked, “Why don’t you tell the Muslims they should leave the land of the Infidel?”

Webb himself, and his history of radicalization, has also raised eyebrows. Webb, who now serves as Imam of the sister organization of the mosque attended by the Boston Bomber suspects, has ties to former Al Qaeda mastermind Anwar al-Awlaki.

“We do have people here who have an extreme way of thinking,” Mohammed admitted. “What I mean by that is [they think], ‘The way I practice Islam is right, you’re wrong. My school of thought is the best, your’s is a little shaky.’ We have that.”

Still, he insisted that “down with America” mindsets are not present at the mosque.

Referring to the recent incident involving Nolen, Mohammed said, “This is not something that’s going to be widespread. We’re going to keep our eye out for this.”

He added, though, that “it’s impossible to completely stop” violence, “because you don’t know what people are thinking.” 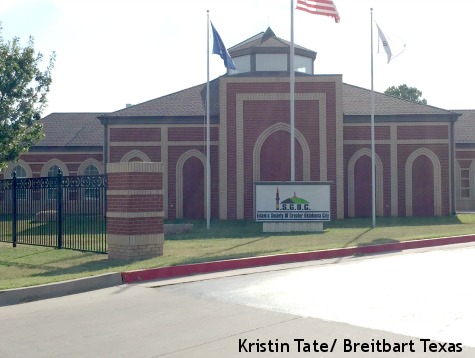