A coloring book featuring U.S. Senator Ted Cruz saving America while riding on a giant bald eagle and carrying a rifle in his hand is flying off the shelves of booksellers around the country. The satirical book of Cruz’ rise to fame has been listed on the Amazon top-selling coloring books for at least twenty weeks.

The book, by Really Big Coloring Books, Inc, a St. Louis-based publisher is responding to the demand for the coloring book “U.S. Senator ‘Ted’ Cruz to the Future” by coming out with a new edition featuring eight more pages titled, “Ted Cruz Saves America.” The company says there is no extra charge according to an article by Howard Koplowitz in the International Business Times. The publisher claims the book is a “non-partisan, fact-driven view” of how Rafael Edward “Ted” Cruz became a U.S. Senator and illustrates through pictures featuring his quotes, public information and his ideas for “what he believes will help people grow.”

The new pages released in the supplemental edition of the book include Cruz fighting a multi-headed serpent that represents Obamacare, Illegal Immigration and High Taxes. It also contains a page showing a newly elected President Cruz walking up to the White House with his family after a successful 2016 campaign bid.

One page of the book shows a headshot of Cruz with a caption at the bottom that reads, “a passionate fighter for limited government, economic growth and the Constitution.” Another page reflects on the Senators strong Second Amendment beliefs by depicting him wearing hunting gear, carrying a rifle and reminding people about the importance of the Constitution.

The book also immortalizes Cruz’ famous 21-hour filibuster where he made another book famous as he read “Green Eggs and Ham” to his children from the Senate floor.

Not everyone is happy about the Cruz coloring book. One Amazon customer, Scott Peterson wrote a satirical review of the coloring book and said,  “Apart from the fact that it only provided me with a white crayon, I didn’t get to finish it, because as soon as I started to work, the Republicans came in and filibustered me before I could finish. Now my book is shut down, and they’re blaming me for political maneuvers.”

Another review came from customer who said, “I have been struggling to teach my nephew the meaning of hypocrisy. Thankfully, this Ted Cruz coloring book does a magnificent job of illustrating what I’ve had trouble putting into terms an 8-year-old can understand. I hope they have a Michelle Bachman coloring book so that I can teach my niece about feminism!”

“We make books for the entire slice of America,” Bell said. “I’ve never talked to Mr. Cruz. I don’t know him … But there are fanatic admirers of Ted Cruz.” 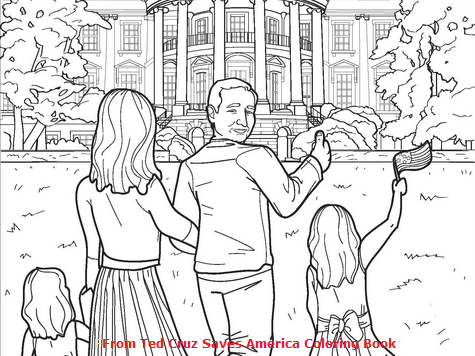 The Washington Post’s Sarah Larimer wrote, “I was told to go color Ted Saves America, the supplement to the Ted Cruz coloring book which is … sort of hilarious. I mean, sure, also patriotic and stuff. But mostly just hilarious. And also, yes ANOTHER indication of the interest in building the Cruz #brand before his inevitable likely presidential candidacy. If people buy a Ted Cruz coloring book, how could they not buy his presidential bid? Right? Right?”