The nation’s oldest living veteran is spending Veterans Day in an Austin, Texas hospital instead of celebrating a day he has earned. The 109-year-old was hospitalized with pneumonia.

Richard Overton was scheduled to speak to guests at Austin Community College’s annual Veteran Day program, according to KXAN-NBC in Austin. Because of his hospitalization, his wife Martin Wilfred spoke on his behalf.

Overton turned 109 in May. His birthday was celebrated as “Mighty Fine at 109” at an event hosted by Mighty Fine Burgers, Fries and Shakes in Austin.

The solder served in the Pacific Theater of World War II in the U.S. Army from 1942-1945 according to the Austin American-Statesman. He worked in the all-black 1887th Aviation Engineer Battalion. He was reported to have dug foxholes and fought Japanese soldier who hid in trees and hollows. He left the Army in October, 1945, after earning the rank of sergeant.

Born in 1906, the Army veteran has seen the coming and going of eleven presidents. He was born in an era where manned flight was nearly unheard of and has lived to see men walk on the moon and fly around the world with the ease of traveling around town.

He has lived through a segregated upbringing in the South, to serving in a racially segregated combat unit, to seeing a black men become top military leaders and even the President of the United States. 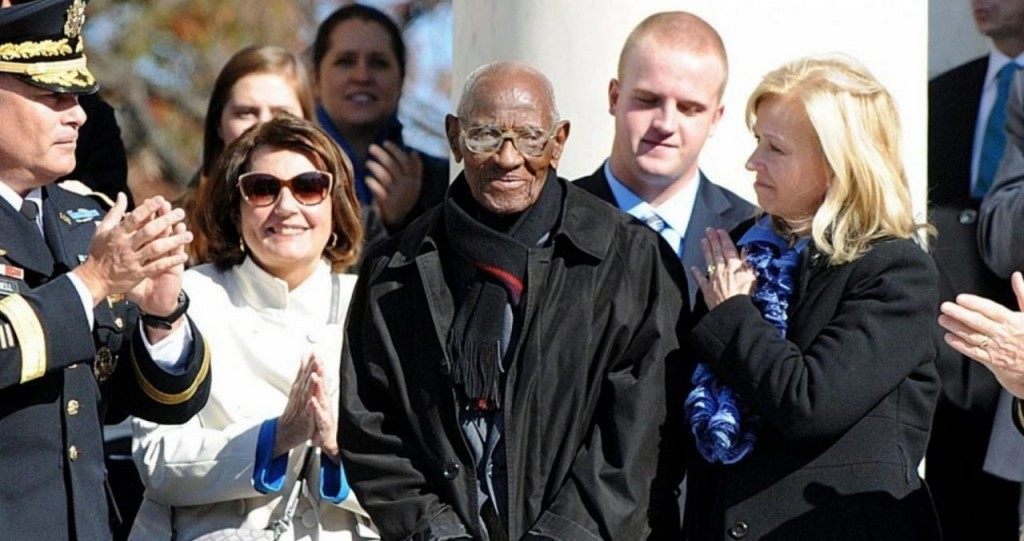 Two years ago, Overton traveled to Washington DC where President Barack Obama honored him during the Veterans Day service at Arlington National Cemetery, the Statesman reported. “He was there at Pearl Harbor, when the battleships were still smoldering,” Obama told the crowd. “He was there at Okinawa. He was there at Iwo Jima, where he said, ‘I only got out of there by the grace of God.’”

Overton enjoyed his trip to the White House and told reporters, “I enjoyed every bit of it. I wish I could do it again.”

The native Texan was born in Bastrop and lived much of his life in Austin where he has seen the Texas capital city double in size five times, KXAN reported.