Texas is home to five of the fastest growing cities and towns in the nation says the U.S. Census Bureau. They released new population estimates Thursday that show explosive growth lies in the state’s suburbs. The study looked at the top 15 cities nationwide, ranking them based on growth in cities with populations of 50,000 or more.

During the period between July 1, 2014 and July 1, 2015, five of the 11 fastest-growing cities nationwide were the Texas suburbs of Georgetown, New Braunfels, Frisco, Pearland, and Pflugerville. Also, five of the eight U.S. metropolitan areas to add the most people were also in the Lone Star State — Houston, San Antonio, Fort Worth, Dallas, and Austin. 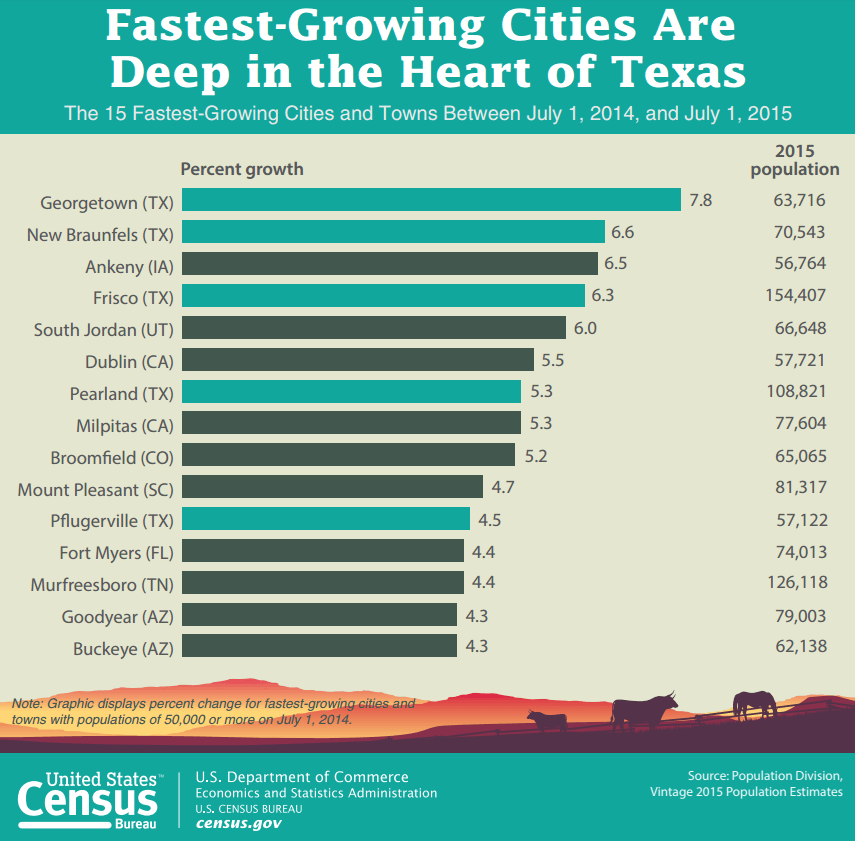 Georgetown led the nation as the fastest growing U.S. city with 50,000 people or more. Its population increased by 7.8 percent, to almost 64,000 from July 2014 to July 2015. Georgetown is part of the Austin-Round Rock metro area, which, last year, crossed the 2 million population mark for the first time, according to census statistics released earlier this year.

Georgetown Mayor Dale Ross offered some perspective on Georgetown’s recent growth rate in a statement obtained by Breitbart Texas. “Why are so many people moving to Georgetown? I think when they first visit here they recognize Georgetown is growing, however our quality growth has been guided and managed so that we have not lost our small town charm,” said Mayor Ross. “The nineteenth-century buildings on the Most Beautiful Town Square in Texas, our historic district, and our world-class park system tells our unique history. Our rich and proud history that goes back nearly 170 years is treasured.”

Georgetown is home to the state’s oldest chartered higher education institution, Southwestern University. The mayor expressed his pride in Georgetown’s schools, modern innovations, and amenities. “We have successfully built a bridge between the past and future which has allowed Georgetown to become the best city in the United States to live, work, play, raise kids, and retire,” he added.

Pflugerville, the nation’s 11th fastest-growing large city, is also part of the Austin-Round Rock area. Austin, the state’s capitol, added more people over the period (19,000) than all but seven other U.S. cities, said the Census Bureau.

New Braunfels, part of the San Antonio metropolitan area, came in as the nation’s second fastest growing city in the 50,000 or more population category. It grew to more than 70,000 people in the time period tracked, expanding by 6.6 percent. In North Texas, Frisco came in fourth with a 6.3 percent growth spurt. The upscale suburb sprawls across Collin and Denton counties, north of Dallas, and houses 154,407 people. This summer, the Dallas Cowboys corporate headquarters and state-of-the-art practice facilities open in Frisco.

Elsewhere in the state, Arlington, another Dallas suburb, rejoined the U.S. Census Bureau list of 50 most populated cities, displacing Cleveland. San Angelo ranked among seven U.S. cities to up their populations to 100,000 or more people for the first time. Galveston and six other cities nationwide, crossed the 50,000 or more population mark in 2014-15.

While Texas experienced its fastest growth rates primarily in its outlying suburbs, five of its major cities added the most people in the last year. Houston led the state as the most populous city, adding 40,032 residents. It also ranked second on the list of top 15 U.S. cities with the largest numeric increases. New York City came in first.

At its current pace, Chicago demographers predict Houston could eclipse Chicago’s population in a decade. Presently, Chicago has approximately 424,000 more residents than Houston, according to the Chicago Tribune. The Windy City took the nation’s largest population hit last year, losing around 2,890 residents, a combination of people fleeing the city and the state.

“That’s the trend,” said Rob Paral, a Chicago-based demographer. He told the Chicago Tribune: “Even if Chicago stays fairly steady for a period, Houston would pass us up in about 10 years. It’s not inconceivable.”

Behind Houston are San Antonio in fourth place, Fort Worth in sixth place, Dallas in seventh, and Austin in eighth, based on numeric increases.

As a result of the population boom, Texas added 162,000 housing units, more than in any other state in 2014-15, according to the Census Bureau. The Dallas Morning News reported the Dallas-Ft. Worth area ranked the second-highest residential construction market in the United States. Only New York City placed higher with more new building permits.

The most recent Metrostudy Inc. report places Dallas-Ft. Worth as the nation’s top U.S. single-family homebuilding market. The strong North Texas economy and rising employment rates fueled a demand for almost 29,000 new houses in the period, according to the Morning News.

These latest growth statistics support Census Bureau figures previously released in March. Migration from other states played a huge role in the state’s population explosion. Breitbart Texas reported nearly 500,000 people relocated to Texas from July 2014 to July 2015, more than in any other state.

Contributing to the explosive growth is the state’s business-friendly climate. Earlier in May, Breitbart Texas reported Chief Executive Magazine named Texas the nation’s best state to do business for the 12th consecutive year. Of the 219 corporations to either move their headquarters from other states or expand their operations into Texas between 2008 and 2014, 15 percent came from California.

Last year, Breitbart Texas reported Texas Population Projections from 2010 to 2050 that predicted the number of residents in the state could double by 2050 if current migration patterns continue at the same pace seen from 2000 to 2010. The Office of the State Demographer anticipated that Texas could house 54.4 million people based on immigration and people moving from other U.S. states.