Photos released by the Texas General Land Office (GLO) on Monday reveal the discovery of a previously unseen, in modern times, section of the Alamo complex. The excavation team uncovered adobe bricks that appear to be of the type of material used to build the original structures of the iconic Texas landmark.

“This is an exciting discovery especially for a former school teacher and Texas history fan like myself,” GLO Commissioner George P. Bush said in a written statement on Monday. “This archeological exploration of the area surrounding the Alamo will be a tremendous benefit as we develop a master plan for re-imagining the Alamo. I am proud of the team of leading experts we have assembled to guide us through this historical process.”

The GLO cannot confirm, at this time, if the bricks found are part of an exterior wall of the mission or one of the buildings within the complex. Officials told Breitbart Texas that many of the mission’s exterior walls were not actually stand-alone walls but were simply exterior walls of some of the buildings. “This archeological dig will help us unearth more sections of structure walls so that we can say with greater certainty where the walls of the compound stood before they were knocked down as the city of San Antonio grew up around the Alamo,” said GLO Press Secretary Brittany Eck.

“The purchase of these buildings caps an extraordinary year in the history of the Alamo,” Commissioner Bush said in December when the purchase was completed. “In one year, we have upgraded the state’s management of the Alamo complex, re-established the Alamo Endowment Board with Texas titans, begun work with San Antonio on the master plan, and now with the Texas Legislature’s support the state purchased irreplaceable properties adjacent to the plaza. While there will be no immediate changes for the tenants, having the state own these buildings will help as we all work together to make the Alamo the destination that it should be.” The structures acquired were the Woolworth, Crockett and Palace buildings.

The push for the renovation and historical study of the land surrounding the Alamo Complex is being carried out in conjunction with the 180th anniversary of the siege and battle of the Alamo which occurred in 1836. 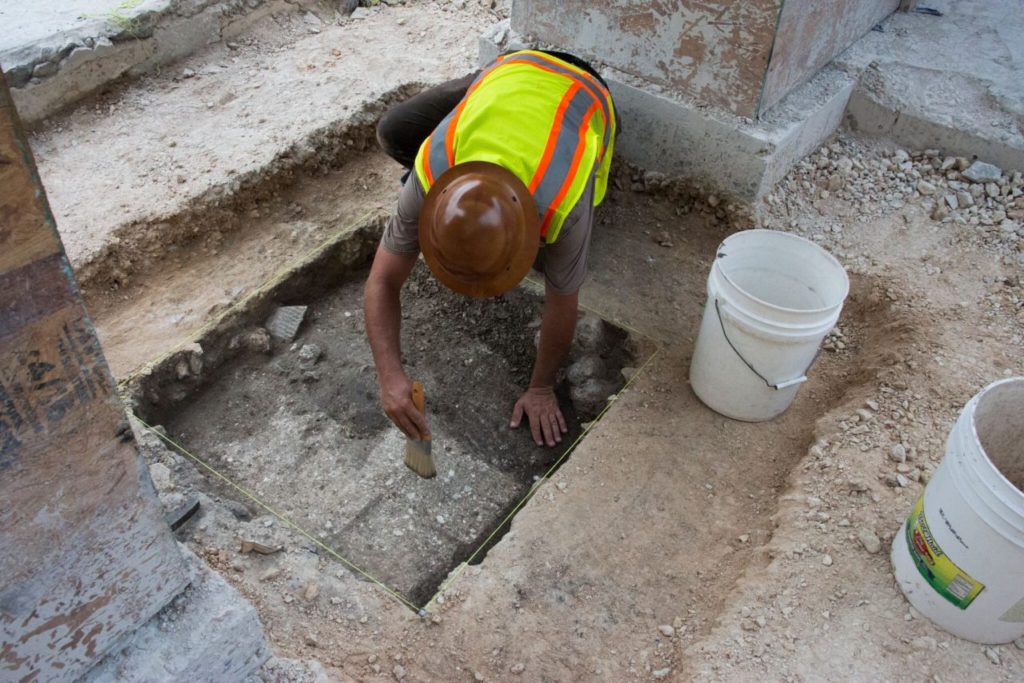 A portion of the historic buildings acquired by the GLO reside with the original boundaries of the Alamo Mission. The mission was built in 1724 by Spanish explorers. It is believed this section contains the headquarters building where Colonel William Barret Travis penned his famous letter calling for reinforcements.

The “Victory or Death” letter by Colonel Travis returned to the Alamo for the first time since being dispatched in 1836 when then GLO Commissioner Jerry Patterson arranged to take the historic letter back to the place of its origination. Patterson told this writer in January 2013, “Most of us have heard about this iconic letter, the Liberty of Death letter, that Travis sent out during the siege in a desperate plea for reinforcements,” Patterson said.  “We got a little help, 32 folks came from Gonzales, but this letter is known as the Victory or Death letter, and it left under cover of darkness on the 24th of February 1836 by horseback, by a courier named Albert Martin. Well, it’s never returned. It’s been a 177 years and that letter that defines the spirit of Texas liberty, sacrifice, and courage has never been back to the Alamo since Travis sent it out.”

The letter was put on display in the Alamo to mark the 177th anniversary of its dispatch by Col. Travis. The legendary Texan commanded the soldiers and volunteers who died defending the Alamo to give General Sam Houston additional time to build the army he would need to defeat the Mexican Army in San Jacinto.

The master plan for the Alamo is being co-chaired by Commissioner Bush and San Antonio Mayor Ivy Taylor.

The collaborative restoration project and archeological exploration is named “Reimagine the Alamo”. More information about the project is available on the organizational website. A public hearing is planned for the project on Tuesday, August 2 at the Henry B. Gonzalez Convention Center in San Antonio. The meeting will run from 6-8 p.m.