Border Patrol agents working the Falfurrias Border Patrol checkpoint in Texas discovered a strange mixture of cargo on Thursday. Mixed in with a shipment of roosters from Mexico were 11 illegal immigrants.

A K-9 agent alerted to the presence of the human cargo when an SUV pulling a small trailer approached the checkpoint located about 80 miles north of the Texas border with Mexico, Border Patrol documents obtained by Breitbart Texas revealed. 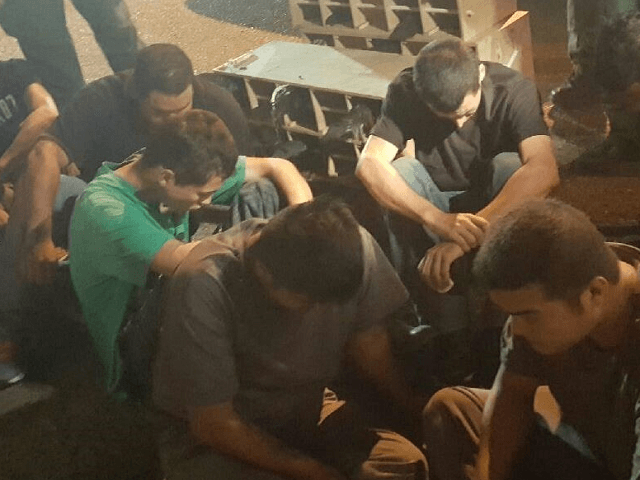 Eleven illegal immigrants being smuggled with a load of roosters in South Texas.(Photo: U.S. Border Patrol)

Following the K-9’s alert, agents asked the driver of the SUV to pull forward to a secondary inspections station. A non-intrusive imaging device revealed anomalies in the small trailer. Agents then conducted a physical inspection of the trailer and discovered 11 illegal immigrants hidden behind the crates of roosters.

Agents took the driver and the passenger into custody along with the 11 illegal immigrants who had recently crossed the border and were being smuggled through the checkpoint.

The roosters were seized by Border Patrol officials pending transfer to the U.S. Department of Agriculture.

Breitbart Texas has previously reported on the extreme means used by human smugglers to carry their cargo to its destinations. The callous smugglers who are often connected to the Gulf or Los Zetas Cartel care nothing about the danger they place their cargo in. When marching the illegal immigrants, smugglers will frequently abandon them if they become injured, exhausted, or otherwise cannot keep up with the group.

Carrying the immigrants in trailers or having them stacked like cords of wood in an SUV also puts them in danger should a high speed pursuit lead to an accident as happened in Edna, Texas in September 2015, Breitbart Texas reported.

Smugglers have also been known to leave their human cargo locked in the back end of cargo trailers where temperatures can reach 140 degrees or more. Breitbart Texas reported on forty such illegal immigrants left to die in the sweltering Texas summer heat last October.